Why was Madagascar settled by far-flung Austronesian seafarers?

I have found that seafarers from Oceania were the first to inhabit Madagascar instead of the much closer Africans in what is today Mozambique. Why is this so?

Polynesian navigators made good use of ocean winds and currents. When following the Indian Ocean Gyre, the most logical way to arrive to Madagascar is from the East: 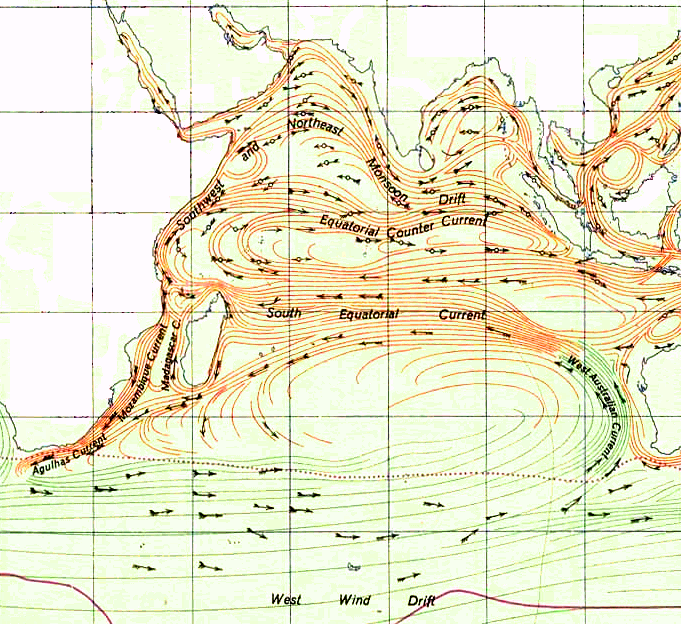 If you look up the South Pacific Gyre, you'll notice a similar pathway to New Zealand from the Polynesian triangle. Also, on the topic of the question mark to the right side of your map, the Incan had (Polynesian) chicken before Europeans arrived.

(Instead of commenting, which can get lengthy, especially with questions, I thought it best to deliver this in the format of an answer.)

Issue: The answer does not fit the question. Given that OP has accepted the answer, makes me hesitant whether to edit the question or comment on the accepted answer.

Explanation: If the question was "How did Austronesians arrive in Madagascar?", the accepted answer might fit the bill. On the other hand, if OP really is asking "why" (i.e. an ultimate cause), I think more context is required.

In fact, even the how aspect leaves out agency of Austronesians, as if oceanic navigation skills at such an early period was normal. They were not. This very recent 2017 Oxford Research Encyclopedia entry explains the feat, i.e. shipbuilding and navigation skills.

Just in case anyone is really looking for the why and not the how of the migration of Southeast Borneo culture to Madagascar, the short answer is trade during 1st millennium CE between Insular Southeast Asia and Indian sub-continent and eastern Africa, namely, Indian Ocean trade.

According to most recent genomic data, this was during early 10th century, at the height of Srivijayan influence as a trading empire.

Not the answer you're looking for? Browse other questions tagged ancient-india migration madagascar austroneisan or ask your own question.

70
Why Were Madagascar and New Zealand Discovered So Late?
21
Why is Indonesia a Muslim country?
12
Which 'evidence' is there for a claim that 'Chinese discovered America in 636'?
22
Why were La Réunion and Mauritius uninhabited?

13
Is there any evidence of post-landbridge travel across the Bering Strait?
22
Why were La Réunion and Mauritius uninhabited?
4
Oldest manuscript of Arthashastra
6
How did the ancestors of proto-Malagasy in South Borneo reach Madagascar?
70
Why Were Madagascar and New Zealand Discovered So Late?
4
How were ancient Indian mathematical texts found to modern scholarship?