15 Mar 1952: The Wisconsin receives her first direct hit in her history when one of four shells from a North Korean 152mm gun battery struck the shield of a starboard 40mm mount.

Subsequently, the Wisconsin destroyed the battery with a full 16in salvo before continuing her mission.

After destroying the artillery battery with her big guns, the Wisconsin received a message from one of her escorts, USS Buck (DD-761). The message read simply "Temper, temper".

I have not seen any version of the story with the USS Buck's message until 5 days ago. Here is a picture of the USS Buck with the USS Wisconsin (and the USS Saint Paul (CA-73)) on 22 Feb 1952. The image can be accessed here. 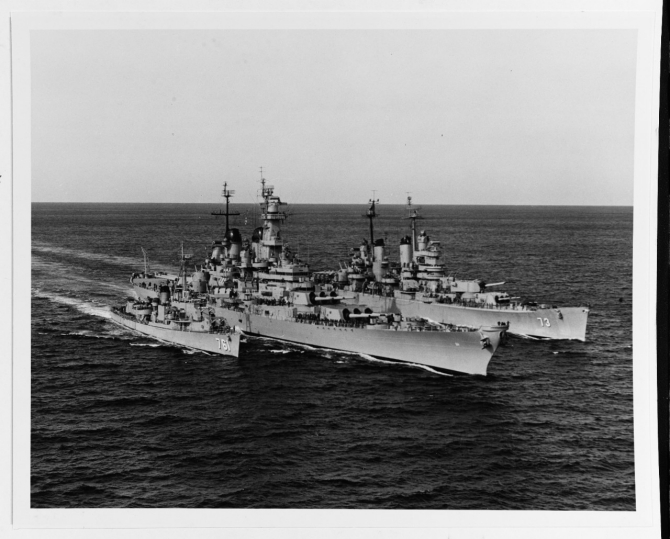 There is some evidence to show that the message was, in fact, sent during that engagement, but it seems unlikely that it was the USS Buck that sent it. It seems more likely to have been the USS Duncan (DDR-874).

There is a Facebook group dedicated to the USS Wisconsin (BB-64). This picture of the damage sustained by USS Wisconsin on 15 March 1952 was posted there on the anniversary this year (15 March 2019): 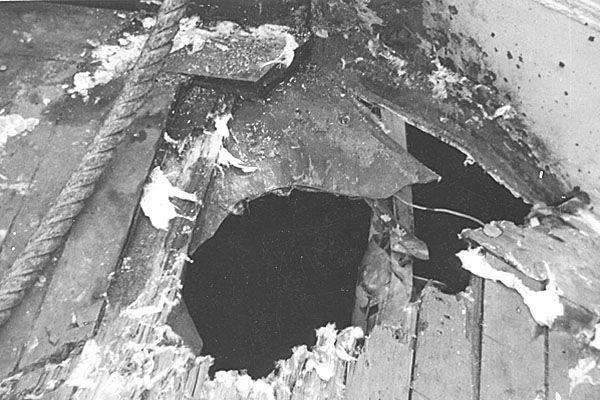 A member of the group, whose father served on the USS Wisconsin at the time posted the following:

"My dad told me about this. If I remember the story correctly this is when the USS Wisconsin received the message, “Temper, temper”"

Which is anecdotal evidence from an eyewitness (albeit at second-hand), which does suggest that the story of the message from an escort vessel may be true.

The Daybook is an authorised publication of the Hampton Roads Naval Museum which currently manages the battleship USS Wisconsin. In Volume 7, No 4 they relate two stories about the incident.

The first of these, part of the article titled 'Freedom Fighter: Battleship Wisconsin in the Korean War', states (on page 16):

This being a reference to the destroyer USS Duncan (DDR-874), the article having previously noted (on page 14):

"In early March 1952, Wisconsin and the destroyer USS Duncan (DDR-874) steamed north as part of an overall effort by the Navy and Air Force to strike targets deep inside North Korea ..."

Unfortunately, since they do not explicitly state their sources for the article, this cannot be considered canonical. However, as their website notes, the Hampton Roads Naval Museum Library "collects materials associated with the battleship Wisconsin", so it seems likely that the story has some evidential basis (which may, of course, be the recollections of men who served on her during the Korean War).

The second reference (on page 12), challenges the claim on many sites on the Internet (although no on the Reddit thread you cited) that the USS Wisconsin was hit by a 155mm shell. They point out that:

"the North Koreans didn’t use the 155-mm howitzer, as it is an American caliber"

"It is a known fact the Soviets handed over a number of 152-mm guns to their North Korean allies."

It is interesting to note that, while I've found while trying to track down the source of this story, most of the sites that state the message was from USS Buck also state that the USS Wisconsin was hit by a 155mm shell.

This identification of the escort as the USS Duncan seems to be confirmed by the website of the Naval History and Heritage Command, on its Korean War: Chronology of U.S. Pacific Fleet Operations, January–April 1952 page, which notes that on 16 March 1952:

This may well be part of the collection 'Reports and Other Records Relating to Korean War Military Operations, 1950 - 1956' held by the US National Archives. This collection is described as follows:

"This series consists of reports and other records relating to U.S. Navy and Marine Corps operations during the Korean War. Included are final reports on U.S. Pacific Fleet operations, and on the First Marine Division operation at Chosin Reservoir. After action reports on other operations, and many maps and map overlays are included. There are national intelligence surveys on Korea, and transcripts of interviews with Marine officers about their combat experiences. Illustrated pamphlets on major lessons of the Korean War, and published historical studies on U.S. Air Force operations in the war are also included. At the end of the series is an Army War College conference report on United Nations military operations in Korea to the end of 1951, and First Marine Division general orders designating combat units in Korea for 1953. The records were maintained by the History and Museums Division and its predecessor."

Since the Hampton Roads Naval Museum also maintains an extensive collection of material relating to the USS Wisconsin (as it says on their website), they may well also have copies of the reports there (in addition to records of the recollections of men who served on her during the Korean War).

The only source I have found prior to the Reddit post is this page on MilitaryHistoryNow which was published in August, 2018 in conjunction with the release of Amy Waters Yarsinske's book USS Wisconsin: The Last Battleship.

I suspect the real answer will be found in Ms. Yarsinske's book or its bibliography. The site contains the text

Notice this mentions "an escort ship" of Wisconsin rather than the Buck specifically. The Reddit post adds the detail, and it may be that the poster got the information from reading the book.

That said, the Navy's own fleet chronology mentions the incident, but not the Buck:

Not the answer you're looking for? Browse other questions tagged military naval korean-war or ask your own question.

7
How did the USS Reprisal sink?
5
Why is USS Saratoga (CV3) nicknamed "Sara Maru"?
9
Did many Nationalist Chinese soldiers fight in the Korean War on the Communist side?
4
In the First Barbary War, how long was the USS Philadelphia aground?
3
Were there crewmen from other USN ships on USS Missouri when the Japanese surrendered?
10
Why was a small vessel tied to the deck of the USS Oriskany during scuttling?
2
How could the USS Maine explosion have been investigated?
8
Why did the Korean War result in a stalemate?
39
Did the Soviet army intentionally send troops (e.g. penal battalions) running over minefields?