How common was gun ownership by Londoners in the early 20th century?

By Londoners, I mean laypeople in London, England. I was reading about the Tottenham Outrage on Wikipedia which mentions policeman borrowing pistols from bystanders or the public three times, which thus makes gun ownership by Londoners far more common than it is now.

One policeman was able to return fire with a pistol borrowed from a member of the public.

One policeman, PC Nicod, borrowed a pistol from a bystander and made his way through the scrub until he was close enough to fire, but the gun was faulty; he was seen by Helfeld and Lepidus, who fired on him, wounding him in the calf and thigh.[34][35]

PC Charles Eagles borrowed a pistol from a bystander and climbed a ladder at the back of the house.

Actually, gun ownership in the UK was relatively common until 1920.

In fact, the right (of Protestants) to bear arms was guaranteed in the 1689 Bill of Rights:

"That the subjects which are Protestants may have arms for their defence suitable to their conditions and as allowed by law;

In 1870, the Gun Licence Act introduced the requirement that a licence was needed by anyone who wanted to carry a gun outside their home: 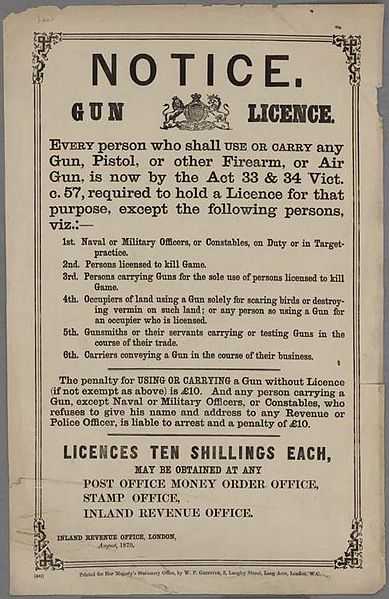 But there were still no restrictions on anyone keeping a firearm indoors. Incidentally, this act remained in force until 1967.

However, the government openly acknowledged that the 1870 Act was

So the aim was rather to raise revenue than to control access to firearms.

In the book Guns and Violence: The English Experience by Joyce Lee Malcolm presents some statistics estimating gun ownership from 1871 to 1964 in the appendix. The figures are based on licences issued under the 1870 Act. It appears that there were about a quarter of a million firearms in private ownership in 1909:

(It's also worth mentioning that it was widely believed that many people simply ignored the requirement for a licence, so the actual number might well have been much higher)

The 1903 Pistols Act denied gun ownership to anyone who was "drunken or insane", and also required a licence for firearms with a barrel shorter than nine inches.

And that was it as far as gun control went, until the Firearms Act 1920 was introduced.

So yes, it was perfectly reasonable for an unarmed Police officer to borrow a pistol from a bystander in 1909 during the Tottenham Outrage.

Not the answer you're looking for? Browse other questions tagged united-kingdom weapons london or ask your own question.

2
English society in the early 19th century: Was aristocracy including royal members?
2
Were life imprisonment and mental insanity the only reasons a divorce couldn't be granted in early 20th century England?
3
How common / uncommon was sword-vs-sword combat on ancient battlegrounds?
2
How common was training with swords and other weapons at Newton's time in England?
3
Who lived on Golden Square in London in the 18th century?
17
Was the act of servicemen exchanging their weapons for enemy weapons common during WWII?
5
What is this 18th or 19th century muzzle gun recently used in a robbery?
7
What did it mean to be a "Jacobite" at the turn of the 20th Century?
7
Was throwing hammers as weapons common during European medieval combat?