What were the grooves in the side of the walls at the rear entrance of Harlech and Beaumaris gatehouses for?

The back of Harlech and Beaumaris castle gatehouses seem to have grooves in the side of the wall for a portcullis, but there is no groove above so if there was one was there it could not be raised. What were the grooves for then? 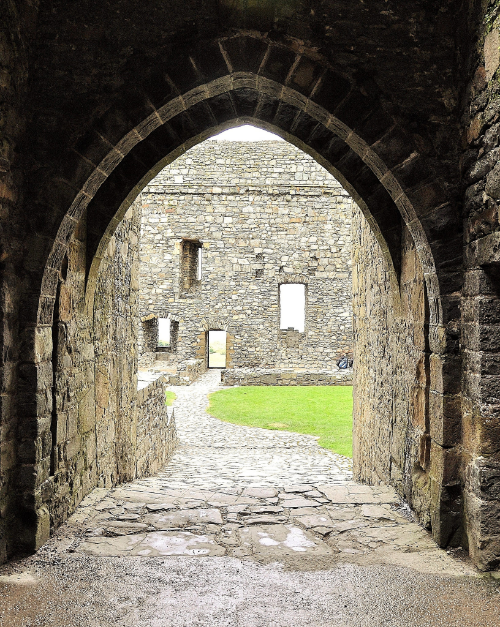 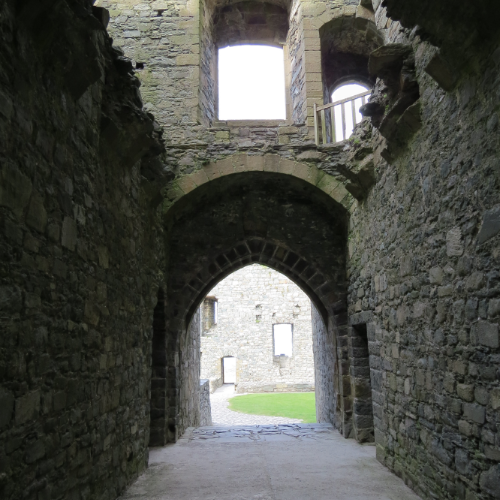 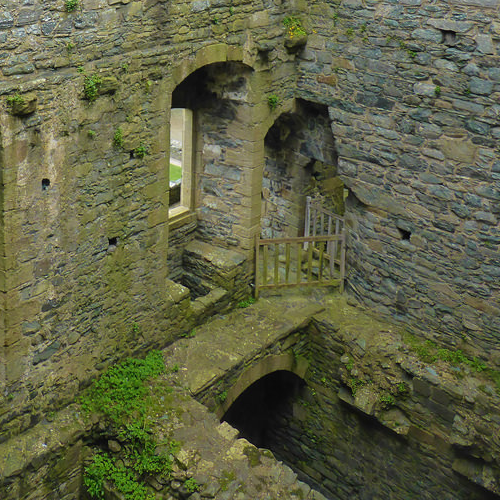 Above the grooves. If there was a portcullis there it would go straight through the window seats. (Source: https://flic.kr/p/KLEhML). 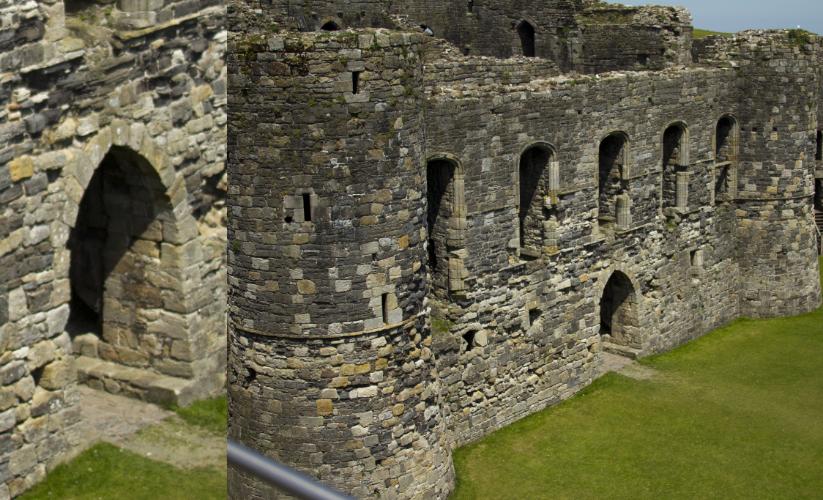 In the case of Harlech, what you describe as 'window seats' is actually a murder hole.

The arrangement of defences at Harlech Castle can be seen in this plan and section of the gatehouse: 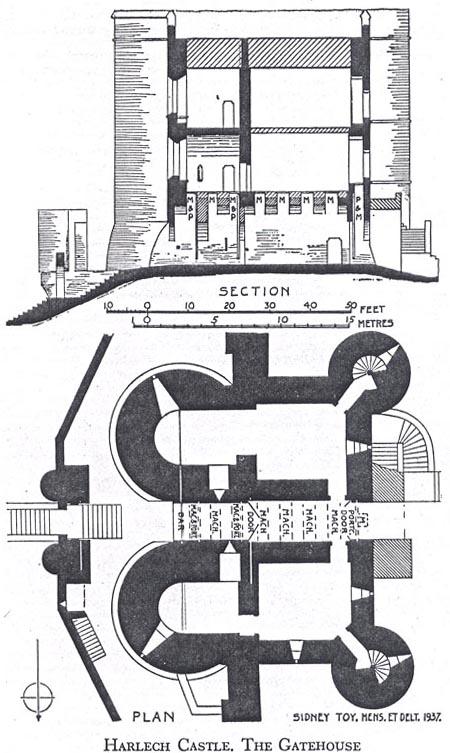 The reason that the slot for the portcullis, and the channels for the ropes/chains that controlled it, cannot be seen on your third picture is simply that the portcullis was removed when the first floor was remodelled. This is described by Charles Peers in his book Harlech Castle:

The inner entry had doors at each end, and had also a portcullis at the western end, though this was done away with by an alteration of the arrangements of the first floor.

This is not an uncommon situation in buildings that were in use for long periods, like Harlech Castle. We frequently see features like doors and windows (or parts of doors and windows), for example, preserved in the fabric of castles or churches after later remodelling.

If we had a picture of the roof of the entrance we might well still see evidence of the cut for the portcullis and the channels for its chains, just as we can in the walls in your first picture.

In the case of Beaumaris Castle, the picture isn't quite as clear. We know that there were several phases of building, and also that the castle was never actually completed.

It certainly does appear that there was an inner portcullis on the gateway through the northern gatehouse shown in your picture:

... a pair of outward opening doors secured by a drawbar, two portcullises and a pair of doors opening inwards. Between each obstacle was a small space covered by arrowloops and murder holes, where anyone entering could be detained or attacked. The next space was larger and was supervised from porters’ rooms on either side and covered by murder holes. These rooms in turn led to the right and left to two spiral staircases, set in their own towers, rising to the apartments above. Another pair of doors and a further portcullis protected the end of the passage into the inner ward.

The slot for the inner portcullis can be seen more clearly in this picture, taken from a different angle: 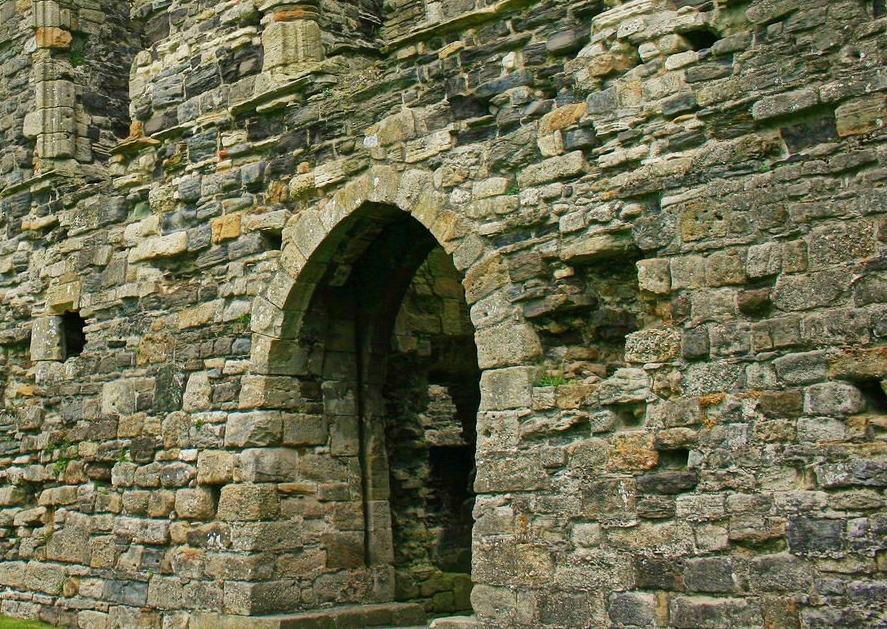 Of course, the slot being present doesn't necessarily imply that a portcullis was ever actually fitted, or that if it was fitted it survived later modifications to the design (as at Harlech).

The problem is that it does not seem to be clear from any of the sources I've found when the upper floor of the north gatehouse, with the five large windows overlooking the inner ward, was actually built. The report cited above notes that:

"Only the towers to the north gatehouse approached their planned height of about 60 feet (18.3m) and the inner part of the south gatehouse never rose above foundation level."

but doesn't make clear when the upper floor, between the towers to the north gatehouse, was constructed.

Other sources seem equally unhelpful. For example, Coflein (the online database for the National Monuments Record of Wales (NMRW)) simply notes that:

The castle was put in order and garrisoned during the English Civil War, but does not seem to have been maintained after its surrender in 1646.

But does not make clear what works were involved in putting the castle in order!

Once again, a photograph of the roof of the entrance to the passage where it enters the inner ward might well show evidence of the cut for the portcullis and the channels for its chains. If these are obstructed by the construction of the upper floor, we can conclude that the portcullis was either never fitted or was removed during later design changes.

Not the answer you're looking for? Browse other questions tagged middle-ages architecture castles or ask your own question.

11
What exactly were currours, and what were they used for?
10
What are the highest and biggest half-timbered buildings built during medieval era?
5
Is there evidence that Harald Bluetooth died from an arrow to the rear?
3
What were the expectations of a medieval castle or fortress hoping to break or outlast a siege?
4
What ancient Roman(s) wished houses were made of transparent walls?
26
How did William the Conqueror consolidate his military victory?
23
How expensive were castles? And how were the costs distributed?
36
How were drawbridges and portcullises used tactically?