What is this 18th or 19th century muzzle gun recently used in a robbery? 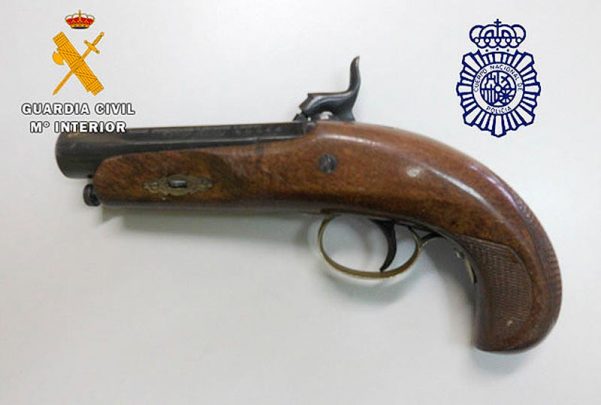 The spanish newspaper describes the weapon, incorrectly IMHO as a "trabuco" (blunderbuss). I ask for a more accurate description.

I offer a translation to the news below, but I don't know if it's appropriate. Feel free to delete that text if you want.

The Civil Guard of Salamanca arrested this Wednesday morning at a > gas station in Aldeatejada an individual who fled after carrying > out two robberies hours earlier in hotel establishments in Avila > at blunderbuss-point.

The agents believe that he could also be the author of a third > > robbery committed in another hotel in the capital of Avila on Wednesday night. At the National Police Station in Ávila on Wednesday was received the notice from several hotels alerting of having been victims of robberies by a man who carried an old muzzle gun, which led to an investigation that allowed the identification of the criminal. Meanwhile, the alleged robber, who had fled by taxi, stopped at first to refuel at a gas station in the province of Avila, where he required the employee to exchange coins for bills, at which time the worker realized that the man had a gun, something he reported to the Guardia Civil

After these communications, the police officers began working together to determine that the individual who had exchanged money at the gas station was the same one who had previously docked at the hotel establishments.

After being intercepted at the second stop at a petrol station, this time in Aldeatejada, the agents checked that the suspect was the same, and when they searched him they found the pistol and nearly 500 euros in banknotes and coins, which led to his arrest.

On the other hand, the Avila Police are investigating whether the detainee is also the author of another robbery of a hotel in the city that was committed on Wednesday afternoon. If this fact is confirmed, there would be three hotels in the capital of Avila that suffered the same type of crime.

It doesn't look like a "trabuco". Those tend to have a trumpet like ending, and use a flintlock.

It looks more like a short barreled percussion cap pistol. (No idea of the maker though.) 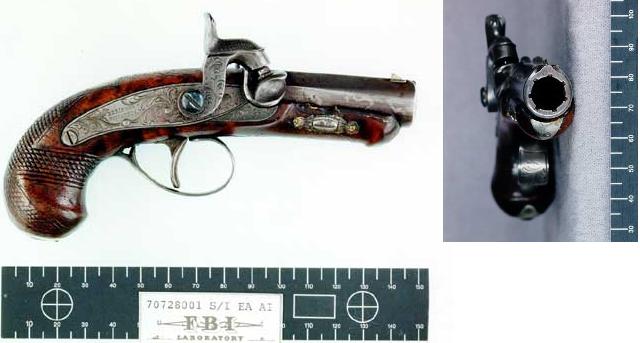 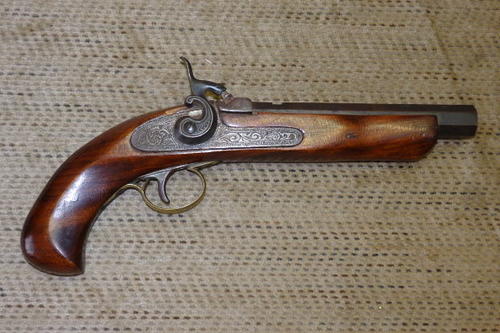 Not the answer you're looking for? Browse other questions tagged weapons identification or ask your own question.

14
What is the flag in this 17th century painting?
8
What are these items in this 16th century plan of an English town?
13
What profession(s) would have used this folding 'ruler'?
8
What is the original source of this 16th century image of a French town holiday with musicians in a tree?
1
What kind of rifle used this shell case?
7
What post-photographic 19th US century dark skirted stripe embroidered jacket, hard brim and top forage cap, light trousers, sword uniform is this?
11
What is this 17th century Swiss coin?