What is the number of slaves imported from Africa to the Americas by non-British countries?

From 1526 to approximately 1870, slave ships from various countries loaded slaves from Africa and took them to somewhere in the Americas.

(Note, in this question, I use "America" and "Americas" to refer to either North or South America, or both.)

Do these numbers exist? Surely logs must exist for these countries' ships just as they do for Britain's.

Current estimates are that about 12 to 12.8 million Africans were shipped across the Atlantic over a span of 400 years.

I'm just pointing this one out to illustrate that, presumably someone did tally up all the slaves from the individual nations' slave ships, or else the sales purchases at American ports. If the latter, then hopefully those purchases have a record of who sold them.

The major Atlantic slave trading nations, ordered by trade volume, were: the Portuguese, the British, the French, the Spanish, and the Dutch Empires.

But this sentence has no source, and it does not even give any numbers for the volume. Nor does it give a date range. Date range is important because I'm pretty sure Britain was the number 1 importer from roughly 1700 - 1830, but later was surpassed by Portugal. I gleaned this from another website, abolition.e2bn.org, saying

In the 1660s, the number of slaves taken from Africa in British ships averaged 6,700 per year. By the 1760s, Britain was the foremost European country engaged in the Slave Trade. Of the 80,000 Africans chained and shackled and transported across to the Americas each year, 42,000 were carried by British slave ships.

That's more along the lines of the info I'm searching for, except it only gives a number for Britain. I would really like to know how many slaves were transported by each European country.

Note: This question is only asking about slave trade from Africa to the Americas. I'm aware that slave trade also existed from Africa to Asia, that many new slaves were the result of births in America, and many other slaveries existed all over the world. For this question I am only interested in slaves loaded onto ships at Africa going to the Americas.

I discovered this answer in the course of asking the question, because I did make a lot of attempts to seek answers as I wrote and reworded each paragraph.

I finally remembered to try Wikipedia in other languages. No luck in Spanish and Portuguese, and French didn't exist, but the Dutch version struck gold.

The table is long and detailed so I'll just use a screen shot. Click on it for a higher resolution. 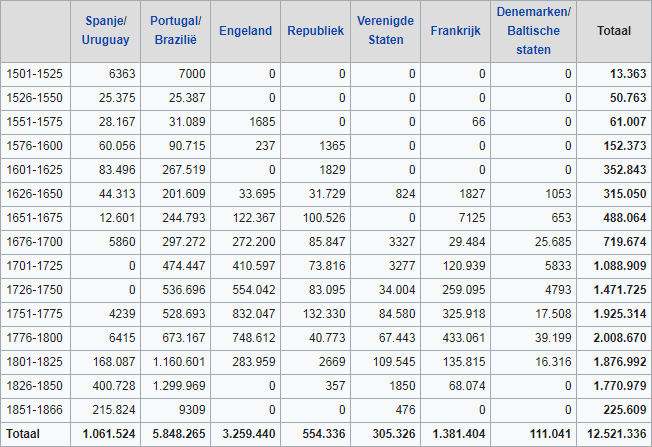 According to footnote number 4, the source is "Emory. These estimated numbers are around 25% higher than the data that can be found in the raw database."

I read through a lot of the article and found this.

Over the years, different types of data sets of slave journeys were created, often based on a single country or port. By chance David Eltis and Stephen Behrendt met in the Public Record Office in 1990 while independently investigating the British slave trade. There the idea arose to combine the databases with each other. In the following years, the data was standardized and coordinated with each other, after which a CD-ROM was issued in 1999 with 27,233 journeys. In the following years the database was further expanded, especially with missing journeys from Latin America. In 2006 it was available online through Voyages: The Trans-Atlantic Slave Trade Database of theEmory university . This database now contains nearly 36,000 slave journeys. [15] Estimates about the numbers of people who were imprisoned and died before the crossing are much less accurate.

I believe this is what it means by "Emory". If so, I couldn't have asked for a better tabulation of answers.

Not the answer you're looking for? Browse other questions tagged europe colonial-america atlantic-slave-trade or ask your own question.

1
British Slave Inventory
6
Did the people who initiated the trans-Atlantic slave trade think they were doing something new?
30
Why was sugar cultivation more profitable in the Caribbean/Brazil than West Africa?
2
How could a black woman be transported directly from Africa to Britain in 1760s?
3
What was the tonnage carried in the Triangle Trade?
1
What was the historical prevalance of inherited chattel slavery?
15
What happened to the British convicts transported to America after the American Revolution?
5
How were false US flags identified on slave ships in the transatlantic slave trade?
12
Which was the official position of the Catholic Church on the Atlantic Slave Trade?