Where can I find data on the amount of fuel carried by WWII Warships and what their operational ranges were?

I am looking for a fairly comprehensive source where can I find data on the amount of fuel carried by WWII Warships and what their operational ranges were? I mean, I want to look up this information for a lot of ships in several different navies. I have found plenty of information about guns, inches of armor, numbers and size of anti-aircraft guns, speed, etc. , but nothing about the tonnes of fuel carried. I would also be interested in learning about the magazine sizes of the ships and how many rounds they could carry or at least how many hours of sustained bombardment they could perform. Anyone have a good comprehensive source for me?

The books annually published as Jane's Fighting Ships should have the information you are looking for. A sample from an early (public domain) edition showing some of the specifications listed: 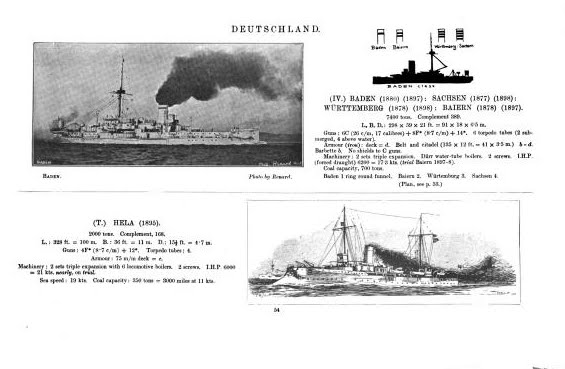 Here you can see the German ship Hela, for instance, is listed as having the following specs:

The volume you may want to find for your specicfic requirements is probably Jane's Fighting Ships of World War II.

Note the link to War Service Fuel Consumption of U.S. Naval Surface Vessels provided by @sempaiscuba has a large amount of information for US vessels.

Radius of action, or combat radius in military terms, refers to the maximum distance a ship, aircraft, or vehicle can travel away from its base along a given course with normal load and return without refueling, allowing for all safety and operating factors.

Conway's All the World's Fighting Ships 1922-46 has the amount of fuel carried and a range at a specified speed for most of the ships it covers, which is essentially every significant naval vessel that served during that period.

It does not have ammunition capacity. In any case, that does not have a simple translation to bombardment duration or capacity. The ammunition load that a ship would carry would depend on what it was expecting to do when it last took on ammunition, and how much risk its officers felt there was of having to do something else. For example, battleships ammunitioning for bombardment off Normandy in June 1944 could be pretty sure they would not be engaged by heavy German ships, because almost all of those were known to be out of action, and the others would definitely be spotted and attacked before they got anywhere near Normandy. So they would load mostly high-explosive shells, with a few armour-piercing for possible use on strong bunkers.

However, battleships loading for bombardment duties at Okinawa in April 1945 were at real risk of needing to engage Japanese battleships, because several of those were still in service and could arrive quite quickly from Japan. They needed a larger proportion of armour-piercing shells than the ships off Normandy, because armour-piercing shell is what is needed for fighting other battleships.

Another factor that's important is wear on the guns. Every gun's rifling wears as the gun is fired repeatedly, but heavy artillery wears out quite fast, with a barrel life of only a few hundred rounds. Bombardment with worn-out guns is pointless, because it's inaccurate; if you were happy with inaccurate bombardment in WWII, you used aircraft, because they were cheaper, longer-ranged and plentiful. However, aircraft take time to arrange for. So naval bombardment was done when precise fire on short notice was required.

Not the answer you're looking for? Browse other questions tagged world-war-two military naval ships or ask your own question.