What is the chair depicted in Cesare Maccari's 1889 painting "Cicerone denuncia Catilina"?

Roman senators sat on benches while the consuls had the privilege of sitting on curule chairs (which are not shown in the fresco).

In addition to the arrangement of the seating, Cesare Maccari's Cicerone denuncia Catalina contains other errors, among which are the location of this particular meeting and Cicero's (apparent) age. The seating depicted is the artist's imagination as we do not know what the senators' benches looked like.

The senate building at the time of this Nov 8, 63 BC oration was the Curia Hostilia but the meeting on Nov 8 actually took place in the Temple of Jupiter Stator (this mentioned by Cicero in his speech), not in the Curia Cornelia (built in 52 BC) as depicted by Maccari.

According to the article Seating Space in the Roman Senate and the Senatores Pedarii by Lily Ross Taylor and Russell T. Scott in Transactions and Proceedings of the American Philological Association Vol. 100 (1969), Roman senators sat on benches (subsellia). Cicero specifically mentions 'benches' in his speech. Taylor and Scott also note that

The arrangements in the senate chamber were similar whether the meeting was held in the Curia or in a temple....There was no fixed place for individuals, though men of the same rank were together.

Senators sat on benches (subselli) down the long sides of the building...

The use of curule chairs was a privilege generally reserved for consuls:

Cicero's position as presiding consul was in a curule chair on a tribunal at the other end of a central aisle. Frequently the consul in charge was accompanied by his colleague who was also in a curule chair; if both consuls were absent, the urban praetor would have occupied the curule chair.

Caesar, like Augustus and his successors, was permitted to have a curule chair between those of the two consuls (Dio 43.14.5). Claudius in senatorial trials sometimes left his curule chair and sat with the senators (Dio 60.I6.31).

Adkins & Adkins state that, during the republic,

Curule magistrates (praetors, consuls, censors and curule aediles) had the right to sit on a special chair (sella curulis) as a symbol of their office.

While we have good idea of what the consuls sat on and what their curule seats looked like, for the senators we are less sure. We know they sat on benches but whether or not they had backrests is unknown. Even the (weak) circumstantial evidence is inconclusive: on the one hand, as The HonRose commented, chairs with (sloping) backs were generally intended for 'women and invalids' but, on the other hand, the solium (a chair with a high, straight back) was used by the pater familias.

The Temple of Jupiter Stator has not survived and there is some dispute as to exactly where it was located. The Curia Cornelia, which Maccari claims to depict, has also not survived but we know that it was a (non-square) rectangular building, as is the (still standing) Curia Julia. The interior of the Curia Cornelia would more likely have resembled the image below than Maccari's picture. 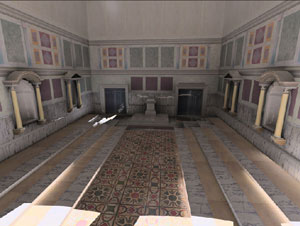 I do not know what the seating actually depicted in Naccari's fresco is called. It seems to be based on a church pew or (as suggested by bonzo-lz, who also notes that Maccari 'worked a lot in churches') a choir bench. The curule seat or chair which the consuls used is not depicted in Cesare Maccari's painting. The Wikipedia article has this depiction: 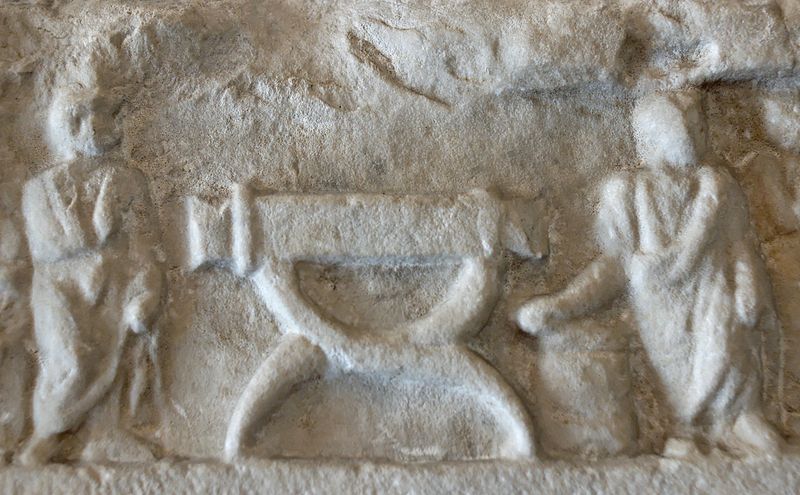 The chairs are called curule chairs.

This painting is a romantic painting. It is anything but accurate. What it shows is how Victorians thought or would like it to be. Roman senators brought their own curule chairs to the meetings of the senate. Or more accurate: their servants brought them.

Compare a curule chair with those on the painting. Vastly different. Reason for the shape of this type of chair is the toga. You can't sit properly in a normal chair wearing a toga. It would crumple and look bad. In a curule chair you have to sit upright, which shows the toga in its proper folds.

Today on toga parties people usually wear bed sheets wrapped around them. That's not a toga. A toga is a long garment, about 6 meters long, with rounded edges on one side. You have to properly wear it, and it takes time to dress up in one. Only Roman citizens were allowed to wear them, and they only wore them on special occasions, as we would wear a smoking. (Which is far more comfortable to wear.) Roman senators would wear them very often, most other people only on formal occasions. You wouldn't wear underwear with a toga, as going to the toilet would be next to impossible. A tunica was often worn under it. (Cato the Younger was notable for wearing nothing under his toga. He did it out of nostalgia, and it was frowned upon.)

Senators sat in U shaped rows (front, left, right) to the speaker, in order of seniority. What you do not see is the https://en.wikipedia.org/wiki/Laticlave, the broad purple stripe on the toga and tunic that only senators were allowed to wear. Senators wore a broad stripe, knights (equites) would wear a narrow stripe.

The Wikipedia article about Roman senators shows the picture you asked your question about, with this remark:

It is worth noting that idealistic medieval and subsequent artistic depictions of the Senate in session are almost uniformly inaccurate.

Not the answer you're looking for? Browse other questions tagged art roman-republic classical-antiquity rome furniture or ask your own question.

8
What is Lorenzo de' Medici holding in this painting?
1
Who's the artist behind this popular painting?
0
Can anyone help identify this painting? (Western, representative, c19-c21)
12
What is the period/term used describe Giuseppe Arcimboldo's style of painting?
8
What is this tool/thing in an Aztec painting?
27
Was Rosie the Riveter sourced from a Michelangelo painting?
9
What is the painting within this 17th c. painting?