What was this slender hooked rod thing that John Wilkes Booth posed with?

In this photo (¿daguerreotype?): 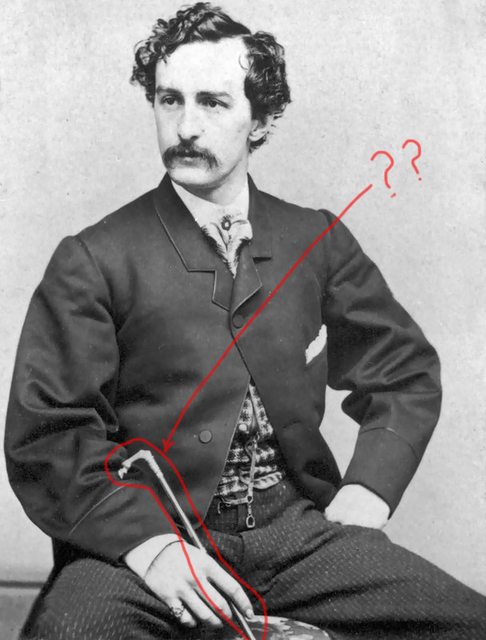 John Wilkes Booth is posing with some kind of hooked rod. It does not seem to be a pipe, cane, umbrella, or writing instrument.

Here are 2 more pics with the same thing (may be from the same session): 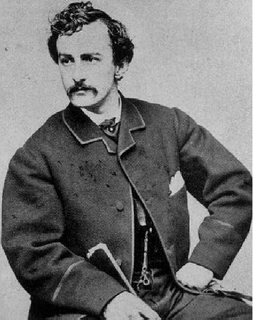 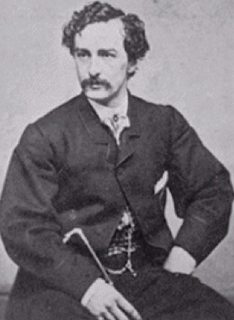 It's a Victorian Turf Cane -Ca. 1860 with shaped horse leg and hoof silver plated handle. They cost $400-$600 today from an antique dealer or online at action. Collecting such Turf Canes or Walking Sticks is a popular past-time today.

They are most closely associated with a walking stick, but too delicate to really serve in that purpose. Too delicate to actually take one's weight or support one as a walking cane might help someone who was old or infirm. They were carried as a social status symbol and fashion accessory.

Some sites have a different term for the item Booth is carrying, a riding crop. The website Gilder Lehrman Institute of American History shows a thumbnail of Booth with the same item, description is

The wiki page for Booth has a link on the bottom to another image, the description here is

Rare shot of Booth probably by J. A. Keenan, the same Philadelphia photographer who photographed him in this attire including riding crop

A riding crop makes more sense to me than a pipe, or a cane. The item is too thin to bear any weight on to be used as a cane or walking stick. Another factor which may lead credence to the riding crop theory, is that the strange shape on the end of the item, appears to be the shape of a horse's leg: 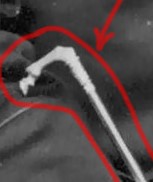 Apparently this shape is a recurring theme on riding crops or whips. An item for sale on a commercial site: 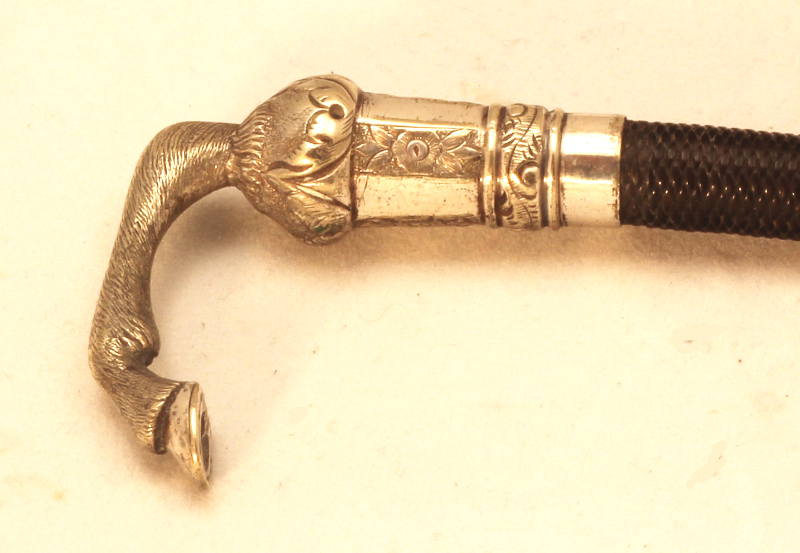 Concerning the form of a 19th century riding crop, here is a description from a publication in 1895, Lloyd's Encyclopædic dictionary, Volume 2, by Robert Hunter

Of course historical evidence placing Booth in possession of a riding crop would be preferred, and incidentally, we have the following from a description of the scene after a failed kidnapping attempt on Lincoln:

...John H Surratt re appeared rushing in a state of frenzy into the room in his mother's house armed declaring he shoot whoever came into the room and proclaiming that his prospects were blasted his hopes gone that soon Payne came into same room also armed and under great excitement and was immediately followed by Booth with his riding whip in his hand who walked rapidly across the floor from side to side much excited that for some time he did not notice the presence of the witness Weichmann tho parties then withdrew upon suggestion from Booth to an upper room there had a private interview From all that

This is from testimony by Louis Weichmann from the conspiricy trial and appears in the 1865 book The Assassination of President Lincoln: And the Trial of the Conspirators ...By Benn Pitman. A more recent retelling of this event cant be found at History News Network,

According to Surratt’s friend and roommate, Louis Weichmann, a frightened Surratt burst into their room at Mrs. Surratt’s around half past six that night, booted and spurred and armed with a Sharp’s four-barreled revolver. “Weichmann, my prospects are gone; my hopes blasted,” he said. Ten minutes later Powell rushed into the room, his face flushed with excitement. When Powell pulled up his waistcoat, Weichmann noticed a large revolver on his hip. Booth came in next, and marched about the room two or three times flicking the riding crop in his hand. At a signal from Booth, the three men went up to the attic to confer. Then they left the house.

This relates the same event with the more familiar term riding crop. The above is listed as

So, historical evidence-actual testimony- seems to place Booth in possession of a riding whip or riding crop (the terms seem fairly interchangeable). (all above emphasis mine).

However, in this image, the object appears to be a decorated walking cane: 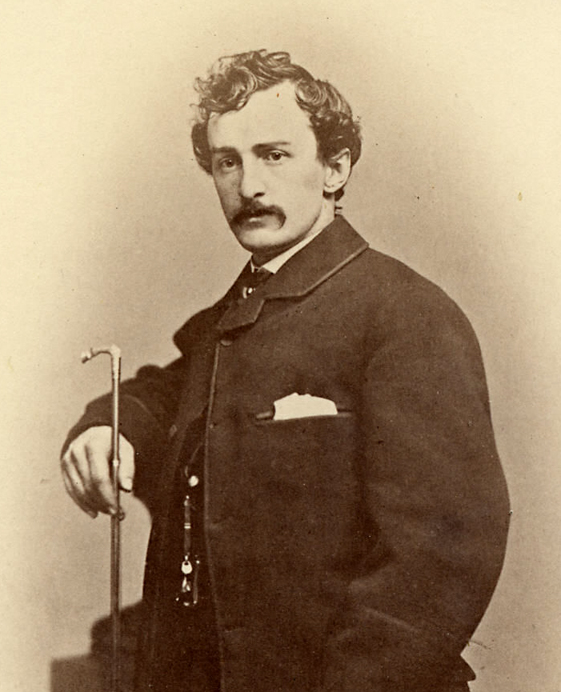 Finally found another picture (at Alamy) that appears to show the same thing: 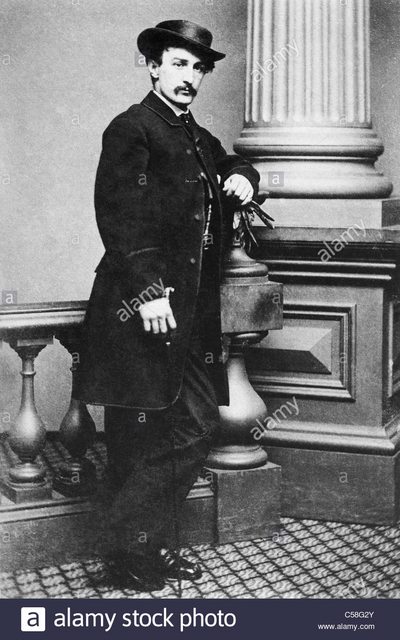 If so, then it looks like a walking stick -- used as a fashion accessory.

Not the answer you're looking for? Browse other questions tagged 19th-century identification clothing photography or ask your own question.

9
Could you help me identify this photograph that was taken shortly after World War 2?
9
A Rake's Progress: What is that weird hat-like thing?
9
What does King Henry III have on his lap in this illustration from a Matthew Paris chronicle?
11
Who is this, probably royal, teenager?
4
What is this medal that LBJ is wearing?
15
Who was Frau Dr. Ebersberg?
31
When was this photo of Mission Dolores *actually* taken?
7
What kind of uniform is this? (Circa 1940s, possibly Israeli)