Did the Babylonians know the Pythagorean Theorem before Pythagoras formulated it?

Came across a clip on TV from an (unidentified) BBC documentary showcasing the Plimpton 322 tablet, written in cuneiform c.1800 BC (1200 years before Pythagoras).

The narrator says the tablet was likely created by a scribe for teaching purposes (kind of implying that it was in common use), with some errors.

As Wikipedia observes, the Plimpton 322 tablet

… lists two of the three numbers in what are now called Pythagorean triples, i.e., integers a, b, and c satisfying a2 + b2 = c2

In addition to the Plimpton 322 tablet we have:

Not only does this show an understanding of what we call 'Pythagoras's theorem', it also shows that the ancient Babylonians knew a pretty good approximation to the value of √2.

(For more detail, see the page Pythagoras's theorem in Babylonian mathematics from the School of Mathematics and Statistics, University of St Andrews, cited below) 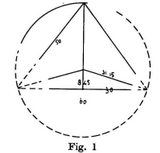 Excavated in 1936, and published by E.F Bruin in 1950 (Quelques textes mathématiques de la mission de Suse), this shows a problem calculating the radius of a circle through the vertices of an isosceles triangle.

Discovered in an excavation close to Baghdad in 1962, and dating to the reign of Ibalpiel II of Eshunna (c 1750 BCE), this deals with calculating the dimensions of a rectangle where the area & diagonal are known.

However, none of this was presented in the form of a 'theorem'. We have evidence for the Babylonians using the concepts in particular cases, but no evidence for a general rule or formal proof.

There is a discussion of the evidence from the tablets described above on the page Pythagoras's theorem in Babylonian mathematics from the History of Mathematics archive of the School of Mathematics and Statistics, University of St Andrews.

[Incidentally, the ancient Egyptians also knew the concepts underlying 'Pythagoras' Theorem' long before the time of Pythagoras. The solution to one of the problems preserved in the Berlin Papyrus 6619 is a Pythagorean triple (although whether that, in itself, implies an understanding of the concepts remains a matter of debate). More convincingly, we have evidence that they used knotted ropes in the ratio 3-4-5 to form right-angled triangles for laying out stonework.]

That is not to say that Pythagoras didn't know about Babylonian mathematics. He may have done (perhaps via Egypt), but we have no evidence of this.

As far as we know, Babylonians had no Pythagorean theorem and no theorems at all whatsoever. The major contribution of the Greeks was that "there are statements (which they called theorems) which can be PROVEN". This was a unique discovery, and no trace of it exists in any other culture. The notion of a "theorem" is a Greek invention, and there is absolutely no evidence that any other culture invented it independently.

Babylonians indeed discovered many integer triples, solutions of the Diophantine equation x2 + y2 = z2. Perhaps they also knew how to find all solutions. It is also likely that they knew that the triangle with such sides has a right angle opposite to z. But this is not what the Pythagorean theorem says!

About the influence of Babylonians on the early Greek mathematicians there is no evidence. Greek historians (of the Hellenistic period) themselves mention the influence of Egyptians, though this has no confirmation in modern research on the history of mathematics. They do not mention any Babylonian influence. The interaction between the Babylonian and Greek cultures is documented after the Macedonian conquests, but not earlier.

Not the answer you're looking for? Browse other questions tagged ancient-greece mathematics ancient-babylon or ask your own question.

6
Did Pythagoras visit Judaea, Arabia, and/or India?
4
Were people in the Neo-Assyrian or Achaemenid Empire aware of the empires before them?
5
What methods did the Old Babylonian society use for solving equations?
9
What was a cistern to the Babylonians?
0
How many digits of Pi did the old Egyptians know?
6
Was 'Jade Mirror of the Four Unknowns' published in 1303, and how do we know?
3
Does anyone know of any examples of the Magnus effect in a real battle?
3
Did the Babylonian priesthood flee to Pergamum?