What battle of WW2 is depicted in this Battlefield V level?

What battle of World War II is depicted in this Battlefield V level?

Credit goes to the game makers of course, as it is their property.

Slight update: I cannot quite remember the map name, but I think that it involves British forces.

Here are a few pictures:

I would suspect that it takes place in France based on the settings, and that it revolves around the bridge, but I am not quite sure at all.

A couple of more are below. Perhaps the soldier uniforms might help?

world-war-two battle
Share
Improve this question
edited May 6 '19 at 16:34

I would have guessed it had to do with "Operation Market Garden" myself, but the developers of the game said this about that map,

"The map takes place along the Escaut river in the northern French countryside during the German invasion in May 1940. Their advance north towards the channel threatened to encircle the Allies' eastern extent into Belgium - in response, a number of defensive lines were hastily established along the Scheldt, Scarpe and Meuse rivers." Twisted Steel Wiki

So the answer is the map is a representation of the Escaut river bridge during the German invasion in 1940. Though the official EA blog states it is not representative of any actual battle.

"While not portraying a specific historical event, Twisted Steel is heavily inspired by the events at the fortified sector of the river Escaut in 1940, on the border between Belgium and France." Twisted Steel Map

Images of appropriate bridges are hard to come by, but if the swampy/flooded terrain shown under the bridge is at all accurate, I believe the battle shown must be the Russian Novgorod–Luga Offensive against the German 18th Army in January 1944. In particular, I believe it is the fight for the bridge marked in red here: 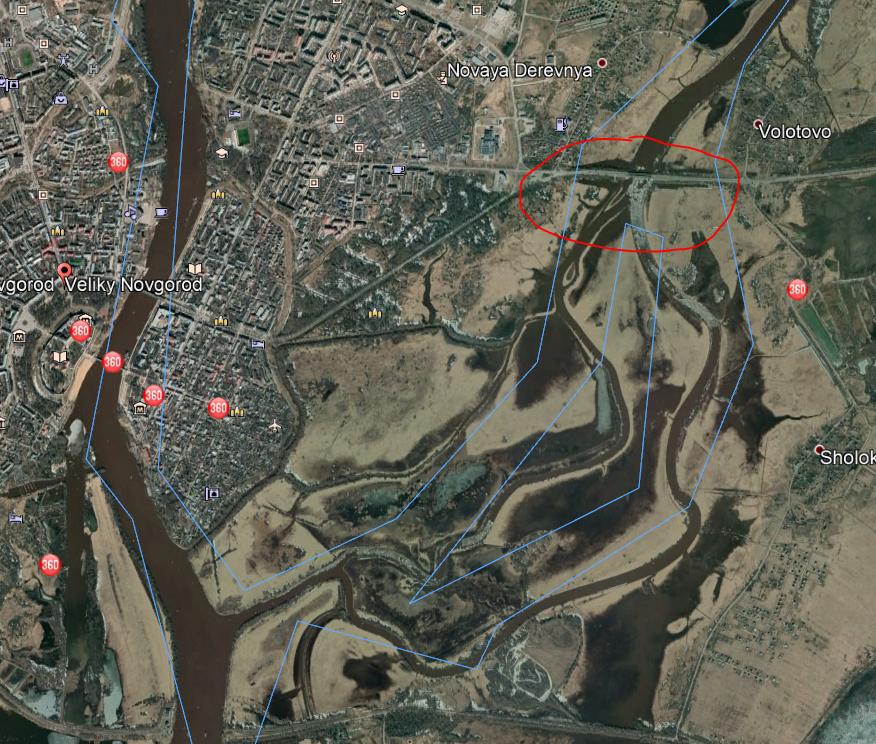 For a game developer it is vitally important to get terrain details correct in order to present any feeling of true simulation to the player - while building details are much less important to get correct beyond period-authenticity. The type of arched metal bridge illustrated was ubiquitous in the early and mid-20th century, particularly in areas where steel (strong in tension) was more readily available than concrete (strong in compression). Steel is strong in tension, so support arch is above roadway in tension rather than below the roadway in compression. Such bridges are still found throughout the Greater Pittsburgh area today. They also provide full clearance under the entirety of each span, rather than just in the centre - important for shipping underneath with tall masts.

Note also that, except for a brief (and quickly cancelled due to friendly-fire casualties) experiment by the U.S. in June 1944, I believe only German SS troops wore camouflage battle-dress in the European Theatre of World War Two.

It's not the British 1st Airborne assault on Pegasus Bridge in the early morning of June 6, 1944: 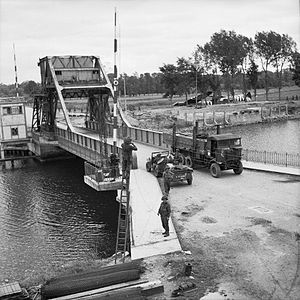 Neither is it either of the Arnhem Bridge 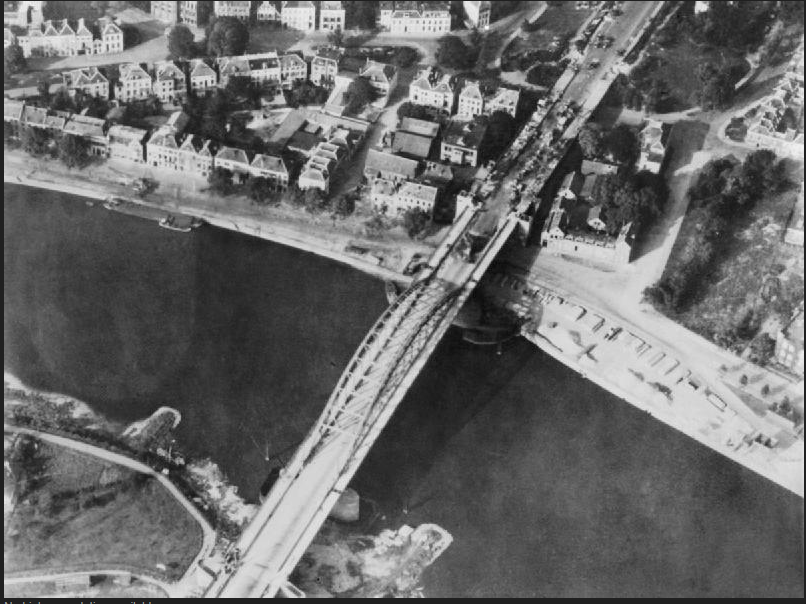 or the Nijmegen bridge, 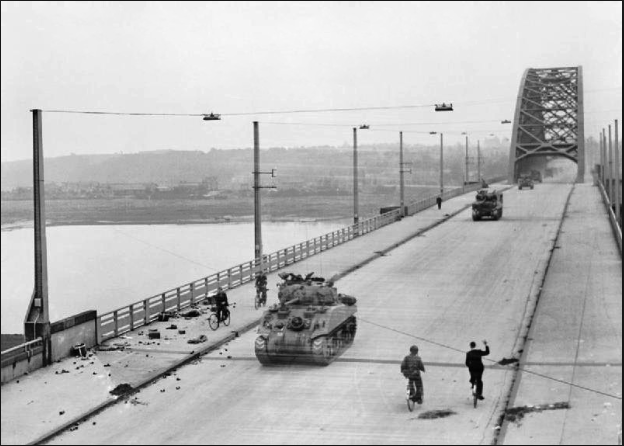 in Operation Market Garden, both of which are set in very urban terrain.

Then I considered the Battle for the Scheldt Estuary, and in particular the assault on Walcheren Island - but that was over a causeway and not a bridge. This battle was appealing because the Germans did flood the Scheldt Estuary, which would match the flooded terrain seen under the bridge of the second screenshot. However a causeway is essentially a dike with a road running down its length - nothing like the raised trestle bride shown.

The closest I could find, from battles to leap to my memory, is the Grave Bridge over the Maas south-west of Nijmegen during Operation market Garden: 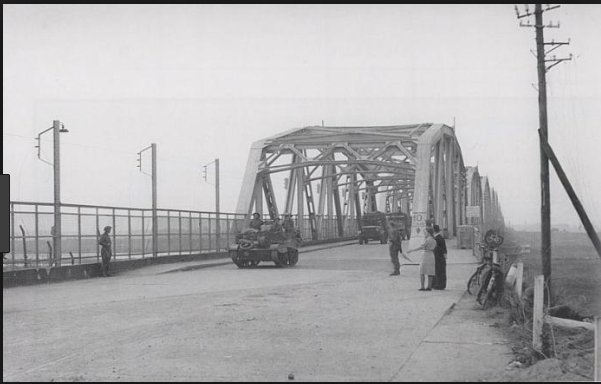 It was secured against very little opposition by the 82nd Airborne on the first morning of the battle. But it again is not really a very good match to either the graphics portrayed or the battle illustrated.

The bridge from your first image looks like the Ludendorff Bridge. The Nazis had demolition charges in place and tried to blow it up, but it survived. The Allies captured it on March 7 1945 and the bridge eventually failed 10 days later, during the Battle of Remagen.

Not the answer you're looking for? Browse other questions tagged world-war-two battle or ask your own question.

4
What was Gen. Buford's ultimate objective at the Battle of Gettysburg?
7
What races are being depicted in this American WWII cartoon?
1
What are the height units of contours on this WW2 topographic map?
5
Is this tale of WW2 true?
3
What was the largest battle fought by ancient Rome?
5
What is the technical term for a head on head battle?
10
How true is this observation concerning battle?