What's the backstory behind the US federal regulation that requires buses to stop at railway crossings?

This Travel SE question's accepted answer raises that there's a Federal Regulation in the US, namely 49 CFR Â§ 392.10 - Railroad grade crossings; stopping required, that requires buses that transport passengers to stop at railway crossings whether a train is coming or not.

Cornel's website has a few links to amendments. Language related to this seems to be present in the 1970 and 1973 amendments. The Federal Register link for 1968 is broken but the Library of Congress has a 392.10 reference titled "Railroad grade crossings; stop-ping required" that from a cursory read suggests it was around then. More specifically, a note on page 19700 (thanks Nate Eldredge!) suggests that the paragraph 292 became 392 in 1968, and that the regulation was introduced even earlier. The Federal Register, unfortunately, doesn't allow to search for docs from earlier than 1994, so my search to locate the earlier text was fruitless.

There were a few major train accidents in the past with some of them related to the US. Cursory search yields e.g. Prestonburg, Kentucky, in 1958; Greely, Colorado, in 1961; or Spring City, Tennessee, 1955; among other crashes. There's always the possibility, of course, that the regulation simply was some official who thought it was a good idea and threw it in in passing, but this seems weirdly too specific so I would imagine some school bus related train crash or something equally awful occurred a few weeks or months before the regulation got introduced.

When was this introduced exactly, and what was the backstory that led to this regulation?

(Partial answer.) Traffic Laws Annotated [pdf], by the US Department of Transportation (1979), pins the introduction to 1930, albeit without much context, on page 209: 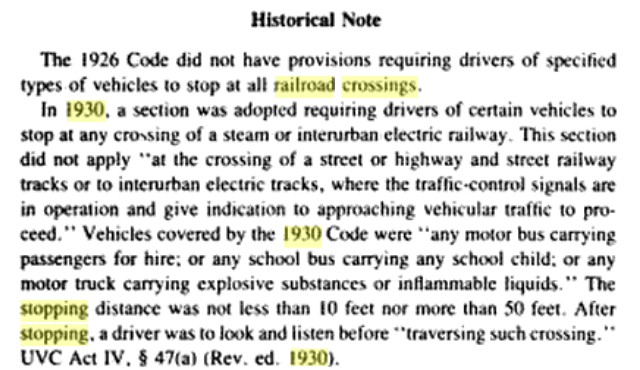 Tracking referenced to the Uniform Vehicle Code from 1930 yields a "Report of Committee on Laws and Ordinances: The President's Highway Safety Conference" from 1949, which offers:

The first Model Traffic Ordinance was prepared in 1927-28 by the National Conference on Street and Highway Safety. It was reviewed and revised by the Conference in 1930, and again in 1934.

That would suggest that a backstory, if any, can be narrowed down to an event that occurred before that report was completed in 1928.

Googling for "train bus crash 1928" suggests there actually was a school bus crash. I'm unable to browse "Safety and economy in school bus transportation - Page 147" by Austin Ruel Meadows (1940) using Google Books, nor am I able to locate the reference on Wikipedia, but Google's snippet is quite promising:

On April 10, 1928, an L. & N. passenger train struck a school bus at the railroad crossing at Mountain Creek, Alabama, killing 1 pupil and injuring 24 ... Witnesses testified that the bus was traveling at a slow rate of speed at the time of the crash.

This doesn't necessarily mean it's the actual backstory, but it seems like an event that could have put school buses on a regulator's radar if it wasn't there already.

Googling the same with 1927 gives another hint, this time in "Decennial Digest, American Digest System - Volume 26 - Page 1294". I cannot access it either, but the snippet is just as interesting:

Put another way, there were court battles at the time, pitching victims on the one hand side, and whoever they were seeking to blame, and at least one of those involved a railroad company that didn't have a flagman at a railway crossing.

Being a bit speculative here, I think it stands to reason that the railroad companies would have lobbied hard to get the liability out of their way, and put the onus of making sure the railway crossing was safe on car drivers rather than man each of those with a flagman.

13
What's the story behind this photo of hikers who brought white plague cure to President Wilson?
22
What East German laws and regulations were extended to the West after unification?
12
How were new states admitted to the Union?
9
Why did United States stop celebrating The Eighth(January 8) as a federal holiday?
6
How did mid-19th century American legislation affect the corporate structure of railroad companies?