Identification of a badge with Russian text

Here's a curious badge that I found somewhere years ago, but didn't know whom to ask. 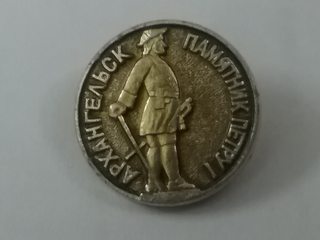 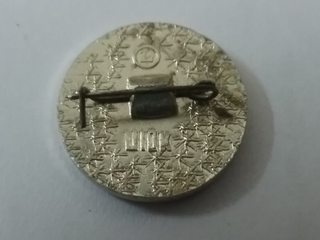 Could someone please identify it? I learnt the Cyrillic script and tried googling it, but couldn't find anything.

soviet-union russia identification
Share
Improve this question
edited May 17 '19 at 14:51

The text reads АРХАНГЕЛЬСК ПАМЯТНИК ПЕТРУ I.
which translates as "Archangelsk – Monument to Peter I."
(kudos for translation refinement to @Neith)

A similar medal is on ebay as: 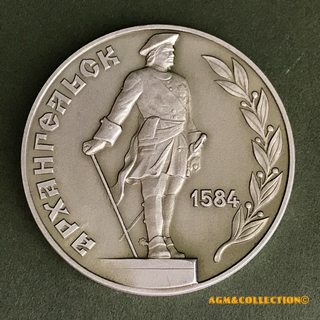 Note that the city of Archangelsk was founded in 1584 under a different name but owes a lot of its importance to Peter.

and it's based on this statue in the city at Severnoy Dviny Embankment | Voskresenskaya St., Arkhangelsk, Russia 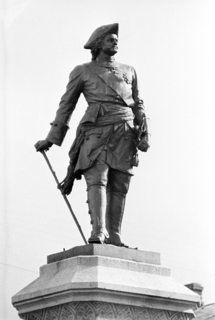 On an unreferenceable hunch I thought that the style would point to Soviet times. This pre-1991 date seems to be more probable if we look at the backside. As @Rompey draw attention in comments

on the back face of the badge is its price--10 copecks. You could buy ten boxes of matches for it or take two bus-rides in the Soviet Union.

As the price for this badge is listed in the metal, that is at the time of manufacturing not likely to change anytime soon, and that being a somewhat widespread practice in socialist countries, it seems ever more likely that another comment presents a more focussed date:

Most likely, this was manufactured in 1984, on the 400th anniversary of Archangelsk. Similar badges were made on other similar anniversaries.
@vpekar

(Better dating still possible. If you know something, write something ;)

Not the answer you're looking for? Browse other questions tagged soviet-union russia identification or ask your own question.

8
U.S. biplane Identification
2
An Austrian Emperor who thought taking his own sweet time about rewarding his underlings was the best way to inspire respect?
12
Did Lenin order the execution of the Romanovs?
10
How many trucks did Russia and Germany have at the start of Barbarossa?
0
Sculpture identification
7
Can anyone confirm the identity of these WWI uniforms?
3
Help identifying this WW1 badge
8
Help on finding out about a sword
10
Did Germans refuse to take Cossacks prisoners in WWI? If so, why?