Did people during the Renaissance believe that the heart had two chambers?

Short question (adapted from @Oddthinking at Skeptics.SE): How many chambers did the scientific population of the world (excluding Leonardo da Vinci), think the human heart had during the Renaissance?

Longer question (adapted from my original question at Skeptics.SE):

For example, during the Renaissance, the common belief was that the heart was a two chambered system, made up of the two ventricles. The atria or filling chambers were considered part of the venous system. Da Vinci clearly states in his papers that the heart consists of 4 chambers, separated by valves.

Was common scientific belief in the Renaissance that the heart "was a two chambered system?"

I have read variously that common belief in the Renaissance was that the heart has 4 chambers 1. However, Aristotle 1 and Galen 2, both of whom predate the Renaissance, believed the heart had three and two ventricles respectively. This belief may have carried into the beginning of the Renaissance (I am unsure if this is really the case). This would appear to contradict ADInstruments' article. What did the general scientific population think?

Original question at Skeptics.SE. (More detailed and since deleted.)

The "common knowledge" of human anatomy in medical circles during medieval times and the renaissance was severely hampered by prohibitions on dissections and the reliance on medical authorities, from sometimes quite early times. The medical community was rather small compared to witches, midwives, barbers and surgeons. Surgeons listed separately, as already Hippokrates made a clear distinction between those and 'real' doctors.

One of the most important anatomists influencing that time was Mondino.

Mondino next explains the dissection of the “spiritual members” or the thorax. The description of the heart is detailed, yet inaccurate. The heart is described as having three chambers: a right ventricle, middle ventricle, and left ventricle. The right ventricle is noted to have a signi cant opening through which blood origi- nating from the liver enters. Despite the anatomical inaccuracies, Mondino provides a detailed and accurate description of the superior vena cava. The left tricuspid valve is noted to have three leaflets.
T.V.N. Persaud & Marios Loukas & R. Shane Tubbs: "A History Of Human Anatomy", Charles C Thomas: Springfield, 22014.

That this was the most widespread conceptualisation can be assumed safely.

Thus, special explanation is scarcely needed for the well-known fact that Mondino's Anatomy, while undoubtedly based in part on its author's own dissections of the human cadaver-which impressed his contemporaries as numerous-repeats a number of erroneous descriptions from textual authorities. Some of the errors were originally made by Galen and derived from the application of information drawn from his dissections of animals to human beings, or from the requirements of his physiological system. Into this category fall the assertions that a rete mirabile ("marvelous net") of vessels is found at the base of the human brain and that a small amount of blood can cross directly from one side of the heart to the other through supposed pores. Other errors arose from misinterpretations of Galen or from efforts to combine the teachings of Galen and Aristotle. For example, Mondino followed Avicenna, who followed Aristotle in asserting that the heart had three ventricles, whereas Galen had clearly and correctly stated that there were two.'"

Leonardo da Vinci, drawing of a female anatomical figure (ca. 1510?) (R. L. 12281R). This drawing shows much evidence of direct observation; however, most of the anatomical details are based on dissections of animals. (See Charles D. O'Malley and J. B. de C. M. Saunders, Leonardo da Vimi on llit Human Body [reprinted New York, 1982, originally published 1952], 456.) The drawing also shows more detailed knowledge of Galenic anatomical and physiological theory than the earlier drawing shown in figure 18, for example, in the representation here of a two-chambered heart (the auricles not being regarded, or depicted, as part of the heart).
(Courtesy Windsor Castle, Royal Library, © 1988, Her Majesty Queen Elizabeth II.) 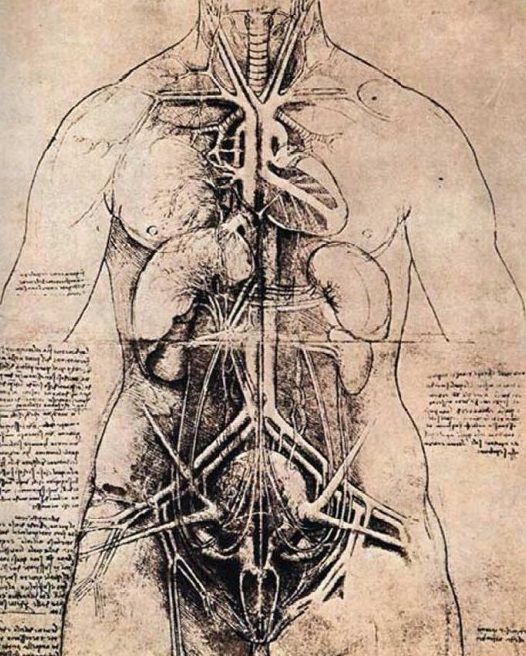 Before Vesalius corrected many of the errors of previous authorities in his De humani corporis fabrica in 1543, it was indeed more guesswork and belief than exact evidence. The strange thing is that what every butcher or army surgeon should have inferred (at least from our modern perspective), are not about the exact structure, but the physiological functions of that organ.

As for Leonardo's conceptional development 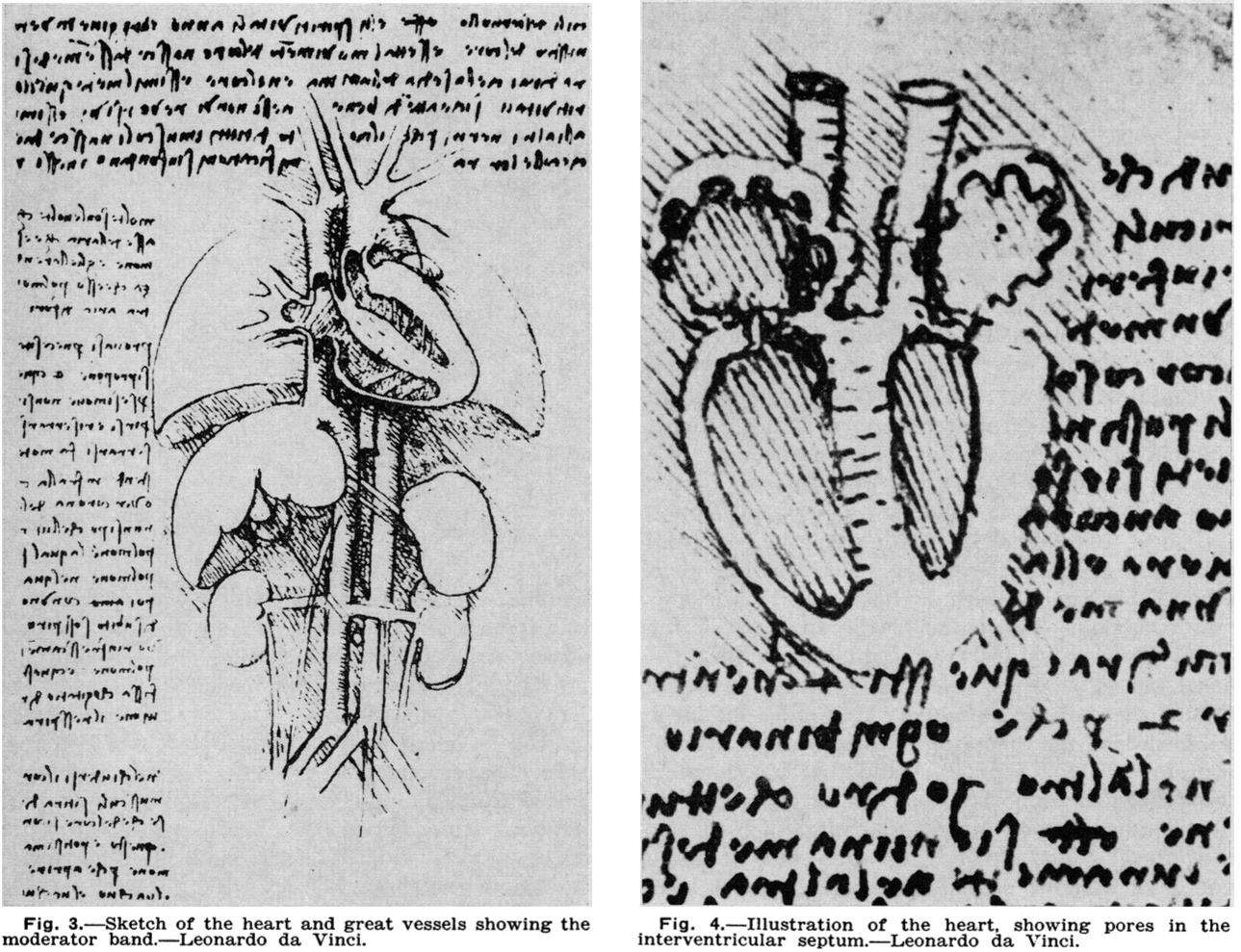 Da Vinci proposed that the left ventricular wall was thicker than the other chambers in order to resist the higher degree of heat found there. This is in contradistinction to the opinion of previous authors who thought that the increased weight of the left ventricle, along with the spleen, counter- balanced the weight of the liver on the right.
Da Vinci inflated the lungs and found that, no matter what force he used, air could not be driven from the air-tubes into the heart. He therefore inferred quite correctly that the pulmonary vein did not transport air to the heart as Galen and his followers believed. Instead the lungs served to cool the blood brought to it and also to cool the heart directly. Although he made many discoveries and observations, da Vinci never published his works. It was for Andreas Vesalius of Brussels (1514-1564) to demonstrate his own magnificent gifts of observation and description in his two epic books, "Fabrica" and "Epitome".
Martin H. Atkinson: "Man's Changing Concepts of the Heart and Circulation", Can Med Assoc J. 1964 Sep 12; 91(11): 596–601. PMID

For what knowledge went into the generalised renaissance mind we have to go back, as all the while an existing theory was what the collected evidence was made to fit into. A guiding principle that in this case didn't result in what we'd describe as very accurate:

This precursor of modern psychology came to predominate the scientific view of the inner man until the modern age. Galen’s teaching concerning the heart enjoyed a monopoly for just as long a time – as a matter of fact until Harvey.

It is striking just how Galen’s conception of the heart managed to predominate from late Antiquity, through the entire medieval period and up to the late Renaissance, in Western as well as in Arab culture. It also illustrates the power of habitual thinking in the sciences, how a logically attractive system of thought and the power of language via established patterns and metaphors can prevent new insights being made.

Galen regarded the heart as a source of heat created by the bloodstream from the liver to the heart, during which the blood comes into contact with air from the lungs. This interaction between element and organ creates a biological melting furnace that heats, purifies and animates the blood with the spirit (pneuma) that air represents. From the heart the vital forces from this spirit are transported via the arteries to the other parts of the body, including the brain, where they are transformed into natural or animal spirits that are responsible for the transformation into outer action.

The essence of this conception of the heart is, then, heat that is produced in the heart-furnace in the workshop of the body. The metaphors Galen uses for the heart correspond to the development of production and working life at the time. Pumps had not yet been developed for production, so Galen did not conceive the heart as a pump.

Considering the fact that the heart that constantly and regularly beats in our breast is one of the first mysteries that man has attempted to understand, it is also striking how tenacious Galen’s theory has proved to be. But his spiritualization of the blood and heart corresponded to and supported the spiritual position the blood and heart of Christ were later to occupy in Christianity. This is perhaps a partial explanation why the theory managed to survive, since the problem had actually been solved by the Chinese, with a long medical tradition that was a possible alternative to the Western one. As early as 2,000 bc the Chinese had discovered that the heart was a pump that pumped blood round the body, which accounted for the human pulse. In The Yellow Emperor’s Classic of Internal Medicine, Chinese physicians could distinguish between 28 types of pulse. The explanation of how the Chinese solved the mystery is, among other things, that they are pragmatically oriented through experience, whereas we Westerners, after Plato, are more bound to hierarchical abstract systems of thought.

And that is all the more remarkable, as what those who cut open a human breast and dissected a heart did see what their theory allowed them to see:

The middle cavity of Aristotle, for its connection with the aorta, is certainly the left ventricle. The left cavity most likely represents the left atrium or auricle, as it is connected to the lungs. The right cavity is morphologically the right ventricle, for its communication with the vena cavae (great vein). Additionally, Aristotle made note of a venous lake at the junction of the vena cavae and the right cavity, suggesting that the cavity was part of the vein. Here, he hesitated to morphologically attribute this venous lake to either the great vein or the right cavity, for it held the features of both, being both thin and a receptacle. Did Aristotle recognize the right atrium? If so, why did he not count it as a distinct cavity, and enumerate only three? In fact, the morphological account of the right atrium as a venous lake is explicit. Elsewhere in the De Partibus Animalium, for philosophical reasons, Aristotle acknowledges that the advantage of an odd cav- ity is that it provides a common source of pure and fine blood to both sides of the body (the other two cavities mainly supply the ipsilateral sides with either warm or cold blood). This, according to Thompson (a biologist and translator of Historia Animalium in Barnes’ edition), represents a tradition or mysticism attached to the number three, which is probably in accordance with Plato’s notion of the three corporeal faculties. Moreover, Harris (a medical historian) notes that, being based on the principle of the mean, Aristotle’s odd cavity was seen as providing a blood intermediate to that of the other two. Thus, from a morphological viewpoint, Aristotle had successfully distinguished four chambers of the heart, but for metaphysical reasons, and perhaps to follow previous teachings, he decided to describe only three.

Not the answer you're looking for? Browse other questions tagged medicine renaissance sociology or ask your own question.

14
Was it ever illegal for two people of different religions to marry in the UK?
7
Why did classical works re-emerge during the Renaissance?
6
Was the term 'renaissance' used during said period?
2
Did nutmeg really prevent infections during the Bubonic Plague?