When did the Ciboney arrive on Cuba and displace the Guanahatabey?

Finding the answer to this question the conventional way is stumping my Google fu, as many sources describe Guanahatabey and Ciboney as synonymous. I am referring to the hunter-gatherer Guanahatabey, and the Taíno Ciboney.

native-americans cuba caribbean
Share
Improve this question
edited May 20 '19 at 17:12

The Guanahatabey by all accounts were hunter-gatherers. AKA: Mesolithic. They also appear to have spoken a language completely unrelated to the various forms of Arwakian spoken in the rest of the Antilles when the Spanish arrived.

I found a reference online that credits "José Jiménez Santander and Lisandra Jimenez Ortega from Department of Anthropology, Eastern Center for Ecosystems and Biodiversity CITMA (Santiago de Cuba)" with an archeological timeline for Cuba. Sadly, their reference link is dead (and it reads like it was somewhat sub-optimally translated into English.1

Taino languages are (interestingly) part of a larger language family that is found all across South America. Its final phase (before Spanish contact obliterated it) appears to have been island-hopping north through the Antilles from its source in South America. So the Spanish found it at its northern frontier when they arrived. 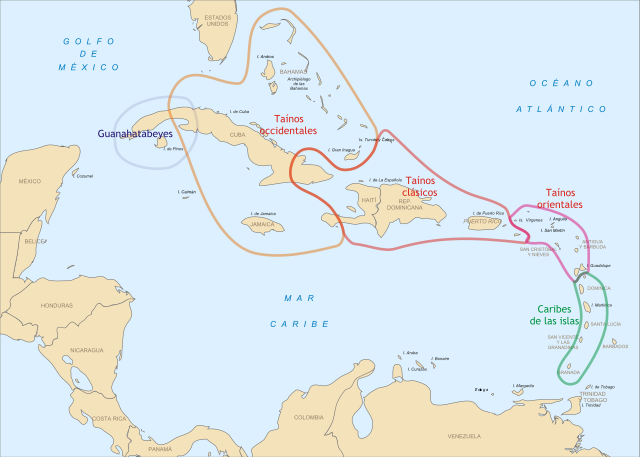 1 - H/T to The Notorious DbB, who found what looks like it might be their paper in the original Spanish (PDF)

Not the answer you're looking for? Browse other questions tagged native-americans cuba caribbean or ask your own question.

35
Did Native Americans ever fight the indigenous people living in Mexico before Europeans arrived?
5
What were the advantages of dual power in the beginning of Castro's Cuba
2
In epic migrations, why keep going?
5
Is there a population density map of pre-Columbian South America?
2
Why is the term "Ancestral Puebloans" used and not simply "Puebloans"?
2
Was the Native American population already decimated before settlers and conquistadors arrived in America?
0
How was the Cuban military capable of performing African interventions?