Are there any important biographies of nobodies?

Biographies usually cover interesting people who said and did notable things. I'm curious about lives notable just for their contexts: the stories of unremarkable people in historically remarkable circumstances. Have any major works been written about nobodies that had unusual lives?

By unremarkable and nobody I mean people who attracted historiographical study solely because of their lived experiences. To identify them we need to exclude not just works about leaders (Theodore Rex) and those written by commissioned biographers (The Joseph Majors story), but also works of anthropology in which individuals proxy for their social group (The Children of Sánchez), works predicated on access to a single unusual source (Montaillou), works addressing events after the subject's death (The Immortal Life of Henrietta Lacks), and autobiographies, whose success establishes the author as a remarkable person (The Diary of a Young Girl).

Are there any well-known books about nobodies? Ishi in Two Worlds may be an example, but not having read it, I don't know whether Ishi's performative cultural testimony was central to the story.

He was an illiterate shoemaker in western France in the 19th century. French historian Alain Corbin picked Pinagot at random on a town registry, and wrote his biography as a way to describe the social environment of 19th century France, collecting as much data as possible about Pinagot, his family, his village, etc.

The result was published in 2001 in Le monde retrouvé de Louis-François Pinagot, sur les traces d'un inconnu, 1798-1876, translated into English as The Life of an Unknown.

Reviews of this original and interesting (imho) work can be found here in French or there in English.

I think you may look into biographies of war heroes. War is an opportunity for a person to do something notable to attract biographers’ attention and still stay just one of the many.

For example, The story of a real man, a novel by Boris Polevoy, is a biography of Alexey Maresyev (Meresyev in the book), a Soviet pilot who was shot down behind the frontline, wounded in both legs, crawled back through the woods for 3 weeks, had both legs amputated and still returned to flying fighters and even had victories. Still, he still was a common frontline pilot, his actions did not have significant impact on war outcome, and he was not even the only one with similar life story.

The Merchant of Prato by Iris Origo (1957) is a biography of Francesco Datini a 14th-century merchant banker.

The only distinguishing factor of Datini is that by chance a huge stash of his written accounts and letters had been preserved and discovered in 1870.

Not a book, but there is a long-running documentary film series in the UK following the lives of ordinary people with a film every seven years from the first when they were seven years old. The latest, '63 Up', has just shown.

One of my favorite historical accounts is The Cheese and the Worms by Carlo Ginzburg (an Italian historian).

It's an account of the life and trial of a sixteenth century miller brought before the inquisition twice, tried, and eventually executed.

"The study examines the unique religious beliefs and cosmology of Menocchio (1532–1599), also known as Domenico Scandella, who was an Italian miller from the village of Montereale, twenty-five kilometers north of Pordenone. He was from the peasant class and not a learned aristocrat or man of letters, Ginzburg places him in the tradition of popular culture and pre-Chrisitan naturalistic peasant religions. His outspoken beliefs earned him the title of a heresiarch (heretic) during the Roman Inquisition."

The novelist Vikram Seth wrote Two Lives: A Memoir, which is a biography of his uncle and aunt.

His uncle was a dentist, originally from India, who studied dentistry in Germany. His wife was Jewish, from Berlin. They left Germany and settled in England shortly before World War II.

The part of the book that I remember best describes the effect of World War II and its aftermath, including the partition of Berlin, both on them and on their circle of friends (both Jewish and Gentile) who originally lived in Berlin.

You could try A Distant Mirror: The Calamitous 14th Century by Barbara Tuchman.

Strictly speaking, it's not a biography, as much as a tour of the 14th century in France, with sections on all the important events of the day: the Black Death, the Hundred Years' War, peasant revolts, the papal schism, and such. But most of the narrative is structured around the life of a mostly unremarkable noble named Enguerrand VII de Coucy. He was a respectable but not particularly influential lord who didn't really play any significant role in shaping history, but took part in all, or nearly all, of the major events of the century. He fought in the Hundred Years' War, saw his estate decimated by the plague, put down some peasant revolts, got caught up in political intrigue due to having an English wife, and died fighting a far off crusade against the Ottomans.

Tuchman chose his life to build her book around specifically because he was the most ordinary person she could find who took part in the events of the day. She wrote in the intro that she spent a while trying to find an even more ordinary person, like a peasant, but unsurprisingly none of them had any detailed enough records of their lives. So the Sire de Coucy it was.

It's been a while since I read it, but I'm guessing that maybe half of the book deals with de Coucy in a biographical fashion, and the other half is more of a traditional narrative. So not exactly what you're looking for, but it might scratch that itch.

To ameliorate some of the western bias among these answers, there's an entire genre of 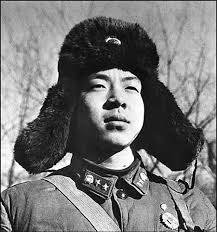 biographies based on his purported diary and others' remembrances of him that have been read by far more people and been far more important to more people than any of the others mentioned here. A billion plus Chinese kids have been raised reading about him as a model citizen, despite his having never held any important post and despite his having been killed at 21 by a telephone pole knocked over by the truck whose movement he was directing.

I'm sure the USSR and their satellites had similar selfless every(wo)men whose hagiographic stories were used to inspire dedication and self-sacrifice among the People. Speaking of which, given the current terms of the question, hagiographies in general fit the bill. Many saints were accomplished churchmen or generous rulers but plenty were simple folk whose personal stories (and legends) were passed down as part of the greater Christian narrative. Similarly the accounts of the Islamic walis, Buddhist arhats, Greek heroes, &c.

Your criteria for exclusion seem quite flexible, so I am not sure if any of the following really count:

There are several works by holocaust and WWII survivors who are more notable for their post-war lives, e.g. Imre Kertesz, Marcel Reich-Ranicki, Inge Deutschkron. There are also works about victims of the war, e.g. about Tanya Savicheva.

1587 Year of no Significance has several biographies of people who were part of the upper levels of the Chinese state at the time, but the author's focus is more on the circumstances of their lives rather than on the individuals.

Wild Swans has a biography of the author's grandmother and her parents. The parents were not really nobodies, but not terribly important either (provincial CCP secretary or so, i.e. second tier after national leadership). But IIRC her grandmother had rather humble origins.

Some more autobiographies: Josef Deifl, who fought in the Napoleonic wars, or Peter Hagendorf from the Thirty Years War.

Christian Weston Chandler is an absolute nobody, yet has a complete wiki (https://sonichu.com/) that documents his whole life, pretty much every email or Facebook post he wrote, every piece of art, video and music he produced. There's also an extensive web of relationships with people he encountered, be they real or not.

Mr Chandler is pretty much the most documented person on Earth, considering you don't get to read the emails from a political leader or movie celebrity.

Not sure if you consider it biography exactly, but Steven Ozment's Magdalena and Balthasar is a lovely study of a 1500s mercantile couple from the Holy Roman Empire. It is principally translation and commentary on their correspondence, studying their relationship and milieu through the medium of those letters, though, rather than a true birth-to-childhood-to-adulthood-narrative biography.

The Minaguchi Inn is a book detailing the establishment in question, from its origins as the house of a samurai, to its transformation into an inn, and the family who lived there.

Not exactly a book, or a serious biography, but the song "The Ballad of Rufus Amos Adams" might qualify.

Europa Europa is a movie but could fit the bill of the story of a random person:

It is based on the 1989 autobiography of Solomon Perel, a German Jewish boy who escaped the Holocaust by masquerading as a "Nazi" German.

While the story is understandably quite extraordinary, Solomon Perel was a standard boy who left no marks in History. The move gives an interesting insight view on the relationships between young Nazis, and their families.

Biographies don't necessarily have to be written. Portraits and sculpture are often just as eloquent forms of testimony. And given your question, I'd point out the custom of memorialising the dead of a war through the tomb of the unknown soldier which arose from the end of the first world war as an eloquent form of biography.

Not the answer you're looking for? Browse other questions tagged historiography book literature writing biography or ask your own question.

2
Are there any universally accepted or non-Abrahamic based books in history that have mentions of longevity of prophets?
1
What does Carlyle mean by 'essence' in 'History is the essence of innumerable Biographies'?
3
Are there any images of old italic or runic inscriptions online?
5
Are there any books solely about the Umayyad Invasion of Gaul?
10
Are there any exemplars of the 'trope of the exiled poet' prior to CE 8?
2
Are there any surviving historical written records about Black individuals in Sub-Saharan African languages?