What caused the Mule Shoe salient?

I have a few ancestors that fought in the 48th VA Infantry Regiment, most of whom were captured at Mule Shoe during the Battle of Spotsylvania Court House.

The Mule Shoe was a half-mile long, mile-deep bulge in the Confederate lines held by Johnson's division . The Mule Shoe itself was attacked twice, first on May 10th and later taken by the Union on May 12th. Around 3,000 Confederates were captures during this second battle. 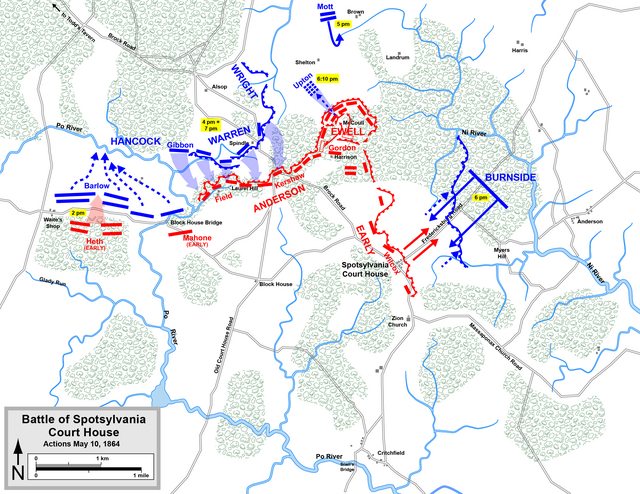 Why were Lee's lines positioned in such a way to have this bulge in the first place? Why didn't he reposition his lines following the first attack if he knew it was a weak spot?

You can do a certain amount of analysis of the general causes of salients. Salients exist when there are two conditions:

In the case of Mule Shoe, Wikipedia writes:

There was only one potential weakness in Lee's line—the exposed salient known as the "Mule Shoe" extending more than a mile (1.6 km) in front of the main trench line. Although Lee's engineers were aware of this problem, they extended the line to incorporate some minor high ground to Anderson's right, knowing that they would be at a disadvantage if the Union occupied it.

That Mule Shoe was high ground is confirmed by the available battlefield maps.

In other words, for Lee to have conceded the high ground at Mule Shoe would have put them at a disadvantage. Lee was therefore willing to expend resources to keep the enemy from doing that, even though the troops defending it would be exposed.

Secondly the Union side, recognising the weakness of the position, made several assaults on it but were unable to dislodge Lee's troops (until May 12th).

This combination resulted in the salient's continued existence.

27
What's the advantage of the infantry column formation in the Napoleonic Wars?

5
What are exceptions to the hypothesis that "climate determined "regional" loyalties in the U.S. Civil War"?
3
What was the term to serve for 1861 confederate volunteers?
6
What were the regimental colors of the 18th NY Infantry Regiment?
6
An American Civil War battle where a general was ordered to advance to a certain point and wait . . . so waiting was all he did?
3
What were the circumstances surrounding Forrest's injury at Shiloh?
2
What was the experience level of officers during the American Civil war?
2
What is the difference between a Division Pioneer and a Regimental Pioneer?