What is the impact of history on food habits in India?

I have observed (although I cannot substantiate it with any complete research data as such, except for a few articles) that, an average Indian diet, especially in the rural parts of India generally consists of more carbohydrate and less protein or other nutrients. Although there are exceptions, based on geography for example, yet, on an average too, it is far less diversified in terms of all the nutrients one should consume to nourish the body well.

There could be a number of reasons why there is such a norm generally prevalent in Indian diet, but I would like to also know, whether such a change in food habits had its origins in our history of long centuries of oppression of the peasant and labor castes or in the historical caste-ism prevalent in India from times immemorial, where a significant chunk of the population sustained on bare minimum means for their sustenance

Here are some examples to narrow down my question:

Until India became independent, the question wasn't so much whether the diet was balanced than it was whether there was enough food to not starve. There have been a few famine threats since, but thankfully nothing like the 1943 Bengal famine, which resulted in an estimated 2.1-3 million deaths from starvation or malnutrition.

As to the evolution of the diet itself, it seems to have changed somewhat since independence, in that consumption of produce, eggs, and diary have increased. There was a study published a few years ago by the Food and Agriculture Organisation of the United Nations (FAOSTAT) to flesh this out. It analyzed the consumption patterns of countries across the world between 1961 and 2011. (The data apparently resides here, but I can't seem to get the page to finish loading.)

This article on results for India give a summary of the findings: 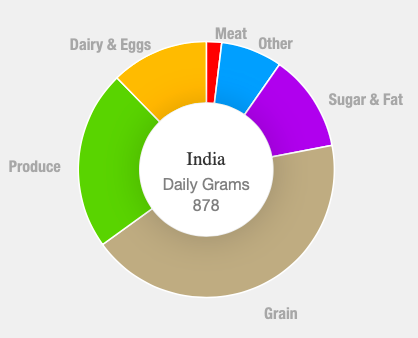 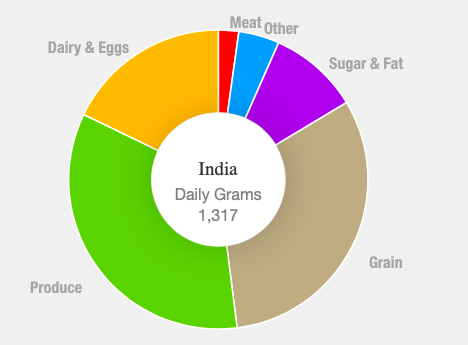 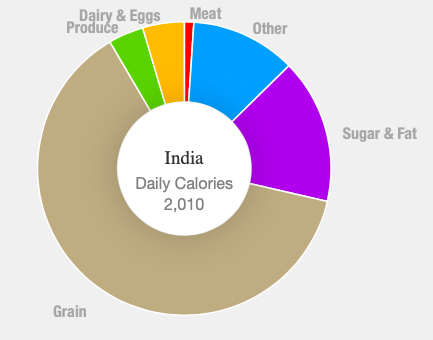 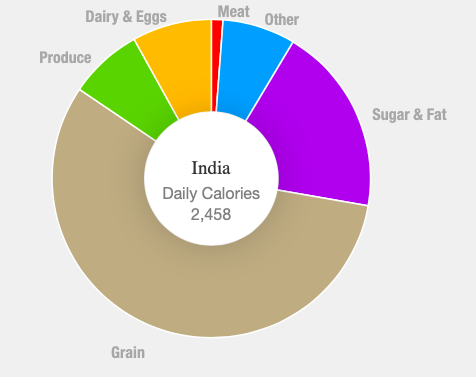 The charts unfortunately don't break things down in enough detail to determine whether the assertions in the article you cite are correct or not. Still, they do hint at the notion that India as a country could be eating more, and more diversely. Or put another way, that the local staple foods are still the basis of what people eat day in day out. This leaves plenty of room to increase gram and calorie intake from the nutrients that the article you cite mentions are lacking. Thus, I would hazard the suggestion that this is all due to, to quote your own words, "a significant chunk of the population sustained on bare minimum means for their sustenance" - while leaving the question of who one should attribute that state of affairs to open.

an average Indian diet, especially in the rural parts of India generally consists of more carbohydrate and less protein or other nutrients.

From a larger historical perspective, this is exactly what's "normal". In traditional societies, starches have dominated while protein has been relatively scarce. As Denis de Bernardy's answer shows, the Indian diet in general has changed in recent decades, as it has all over the world. Higher consumption of protein, fat and processed sugar is a relatively new phenomenon beginning in the wealthiest parts of the world and made possible by "modern", industrialized forms of agriculture and economy more generally. So what the observation in the question illustrates is that rural India has been less thoroughly impacted by these global changes than some other places.

Here is a highly relevant paragraph about the more general pattern of diet in human history from anthropologist Sydney Mintz (Sweetness and Power, p.9):

Most great (and many minor) sedentary civilizations have been built on the cultivation of a particular complex carbohydrate such as maize or potatoes or rice or millet or wheat. In these starch-based societies, usually but not always horticultural or agricultural, people are nourished by their bodily conversion of the complex carbohydrates, either grains or tubers, into body sugars. Other plant foods, oils, flesh, fish, fowl, fruits, nuts, and seasonings-many of the ingredients of which are nutritively essential-will also be consumed, but the users themselves usually view them as secondary, even if necessary, additions to the major starch. This fitting together of core complex carbohydrate and flavor-fringe supplement is a fundamental feature of the human diet-not of all human diets, but certainly of enough of them in our history to serve as the basis for important generalizations.

5
What was the reason why Americas didn't take to buckwheat as a crop?
8
What is the history of standing armies in India?
10
What was the main food source in old California?
7
What containers were used for food prior to the industrial era?