What publication claimed that Michael Jackson died in a nuclear holocaust?

I have a question about some paragraph in Finkelstein's Holocaust Industry. He writes that

Some years back, the parody of a New York tabloid was headlined: “Michael Jackson, 60 Million Others, Die in Nuclear Holocaust.” The letters page carried an irate protest by Elie Wiesel: "How dare people refer to what happened yesterday as a Holocaust? There was only one Holocaust..."

My question: What publication was that? And was the letter by Wiesel itself a parody or a real letter written by him. Finkelstein provides footnotes for quite a lot of things, unfortunately, not for this one.

As Denis de Bernardy found the 'newspaper' alluded to by Finkelstein was the November issue of the 'Post New York Post'.

The headline didn't talk about 'a holocaust', nuclear or otherwise. The paper is a parody paper, not to be taken seriously, as if the news bit wouldn't suggest that already.

But if it would have contained a letter attributed to Eli Wiesel, it could not have been a real letter to the editor by Wiesel. A real reaction to an original, satirical fake news newspaper would not make much sense and is also impossible if viewed from logic, causality and march of time..

The paper could also have invented that bit and just ascribe such a letter to Wiesel?

Problem here: the newspaper does not headline anything 'holocaust', does not contain any reason to publish a letter that attempts to display a reaction by Wiesel to the non-existent headline.

But, that newspaper does have 'a letter' 'from Wiesel' in it. In the same November 1984 issue: 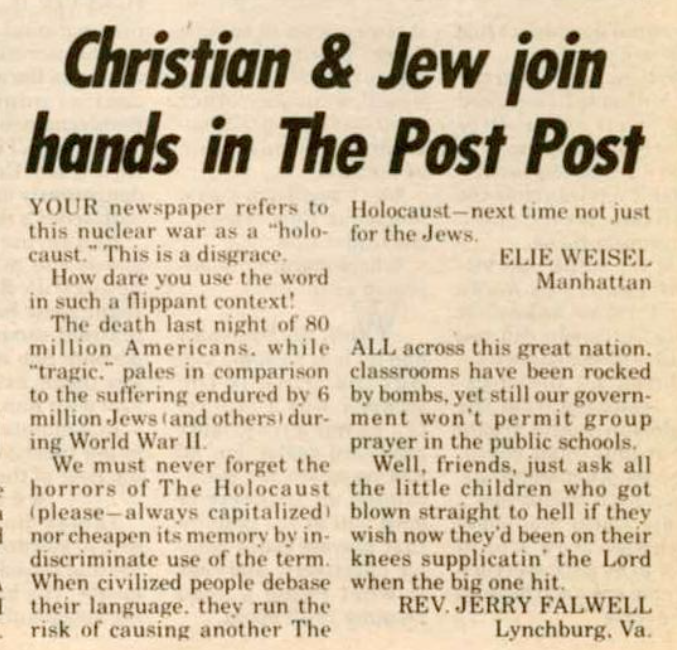 Some years back, the parody of a New York tabloid was headlined: “Michael Jackson, 60 Million Others, Die in Nuclear Holocaust.” The letters page carried an irate protest from Wiesel: “How dare people refer to what happened yesterday as a Holocaust? There was only one Holocaust. . . .” In his new memoir Wiesel, proving that life can also imitate spoof, reprimands Shimon Peres for speaking “without hesitation of ‘the two holocausts’ of the twentieth century: Auschwitz and Hiroshima. He shouldn’t have.”

Finkelstein claims here that after the Post New York Post came out Elie Wiesel "imitated" the spoof in real life.

The context for the Wiesel quote on "Peres, Hiroshima, two Holocausts" in his memoirs reads differently than Finkelstein presents it, especially how Finkelstein contextualises it with the 'letter'.

One cannot speak of suffering or terror, of evil and disaster, without evoking the destruccitve demons unleashed in Hiroshima. Auschwitz and Hiroshima: One evokes the end of mankind, the other the apocalypse of our planet. Both symbolize the curse that, more than fifty years later, continues to weigh upon us. From now on, we will live with the frightful knowledge that the impossible has become possible. Evil has been unleashed, and nothing seems to contain it. Shimon Peres spoke without hesitation of the "two holocausts" of the twentieth century. Auschwitz and Hiroshima. He shouldn't have. Hiroshima was a cruel, inhuman decision, but it was part of a response to Japanese aggression and a global military strategy. It was intrinsically linked to the war in the Pacific. Auschwitz was conceived as an operation that carried its own justification: genocide.

The headline (or more specifically, a variation thereof) was used on the debut edition of the Post New York Post, a satirical take on the New York Post by Robert Vare and the same crew of satirists that also produced Not The New York Times and Off The Wall Street Journal. 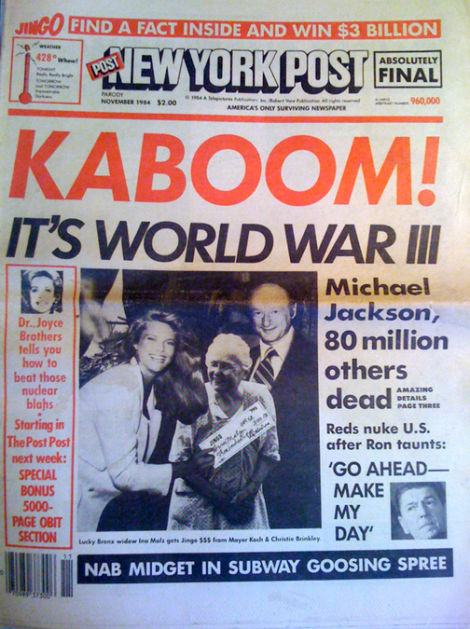 I'm unable to locate anything about the Elie Wiesel quote from the archives, but if as the passage you quote suggests it is indeed in the same paper, then one can only assume this was satire as well. Also, as noted in LangLangC's answer, the actual headline doesn't contain the word Holocaust so the quote is likely apocryphal. See his (IMO better) answer for the details.

11
How do functionalists explain the fact that Holocaust continued until the very end of the war?
20
What is the basis for the argument that the true believers in Juche died in the N. Korean famine?
9
Is there a way to find who died and what American plane crashed over a spot in Romania in 1942/1943?
4
What percentage of relocated Armenians died?
14
What happened in 1914 that ended the golden age of microbiology?
5
What was the role of the Catholic church with regard to the Holocaust?
19
What happened to all the nuclear material being smuggled after the fall of the USSR?
1
What, if any, futurists that went to war actually denied the movement later?