What profession(s) would have used this folding 'ruler'?

This ruler was originally handed down to an aunt on my (English) mother's side of the family. One side is a standard ruler in inches but, curiously, the other side is unlike anything I've been able to find on Google images. 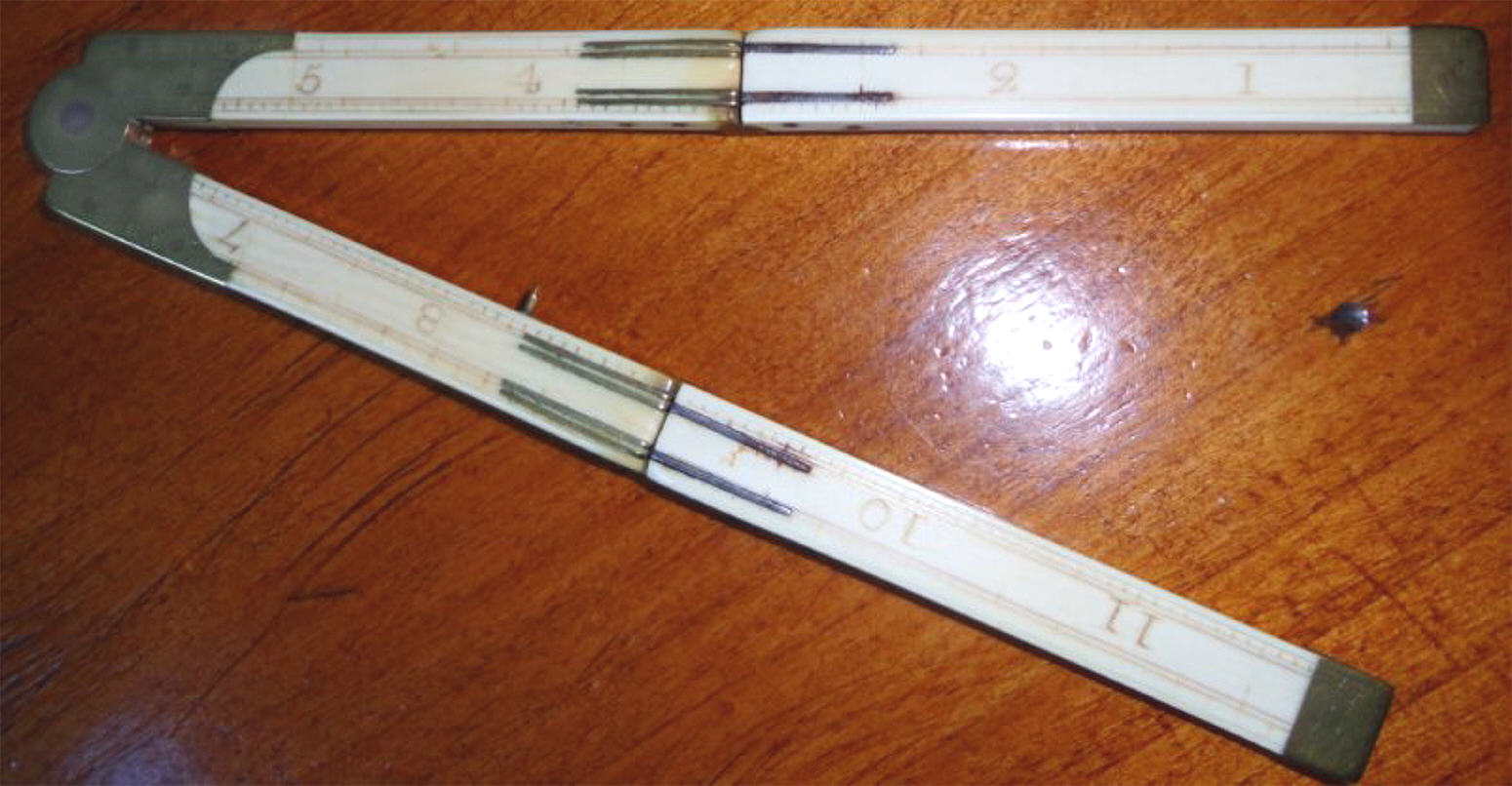 One side has inches. Many such such rulers can be found on the internet. 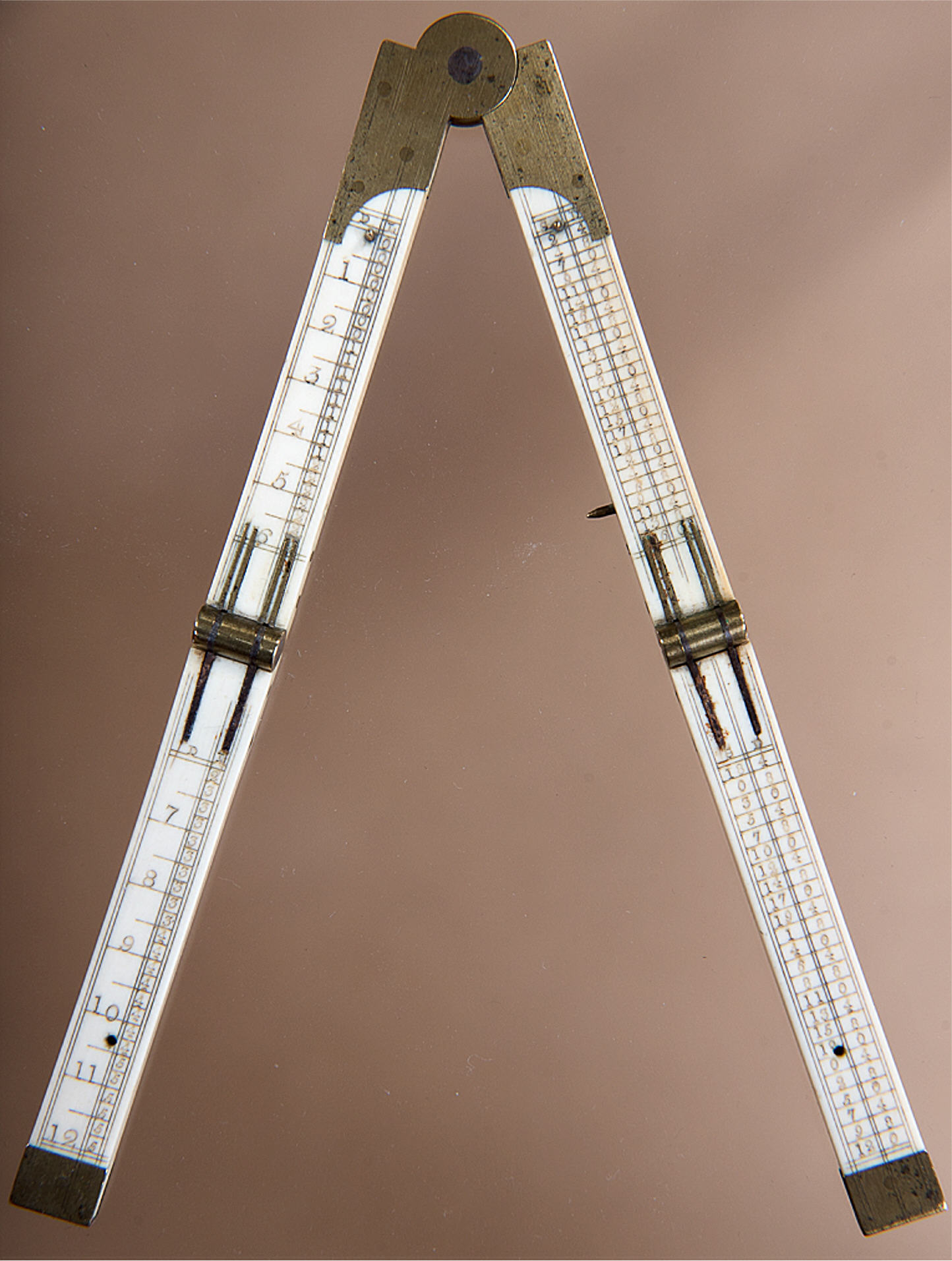 The other side seems to be for prices (lettering includes L S D, presumably pounds, shillings, pence). 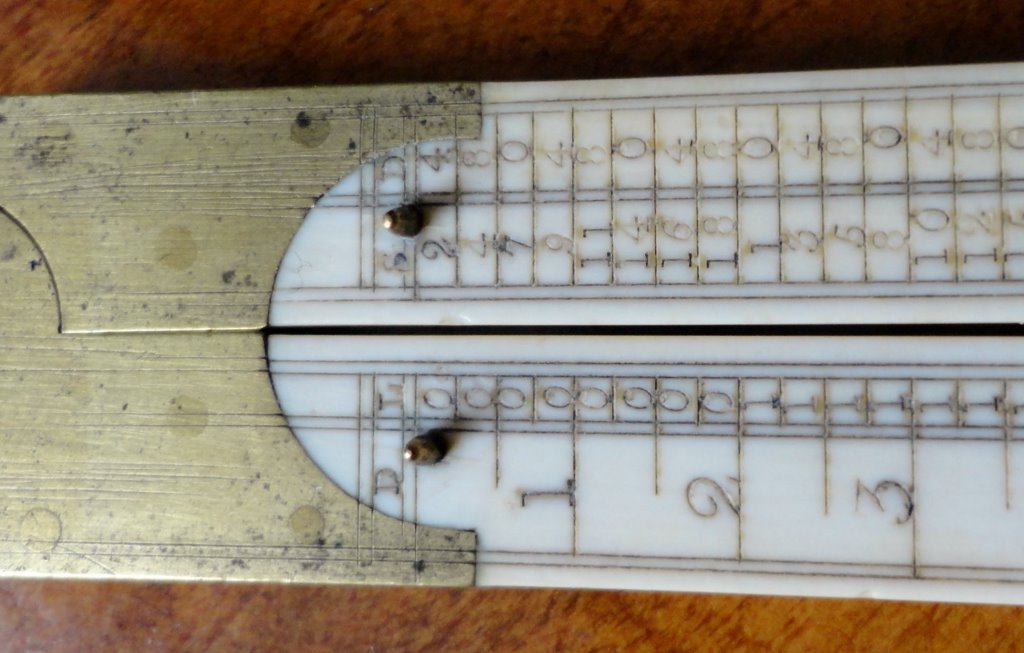 This close up shows D and L on one section, then S and D on the other. 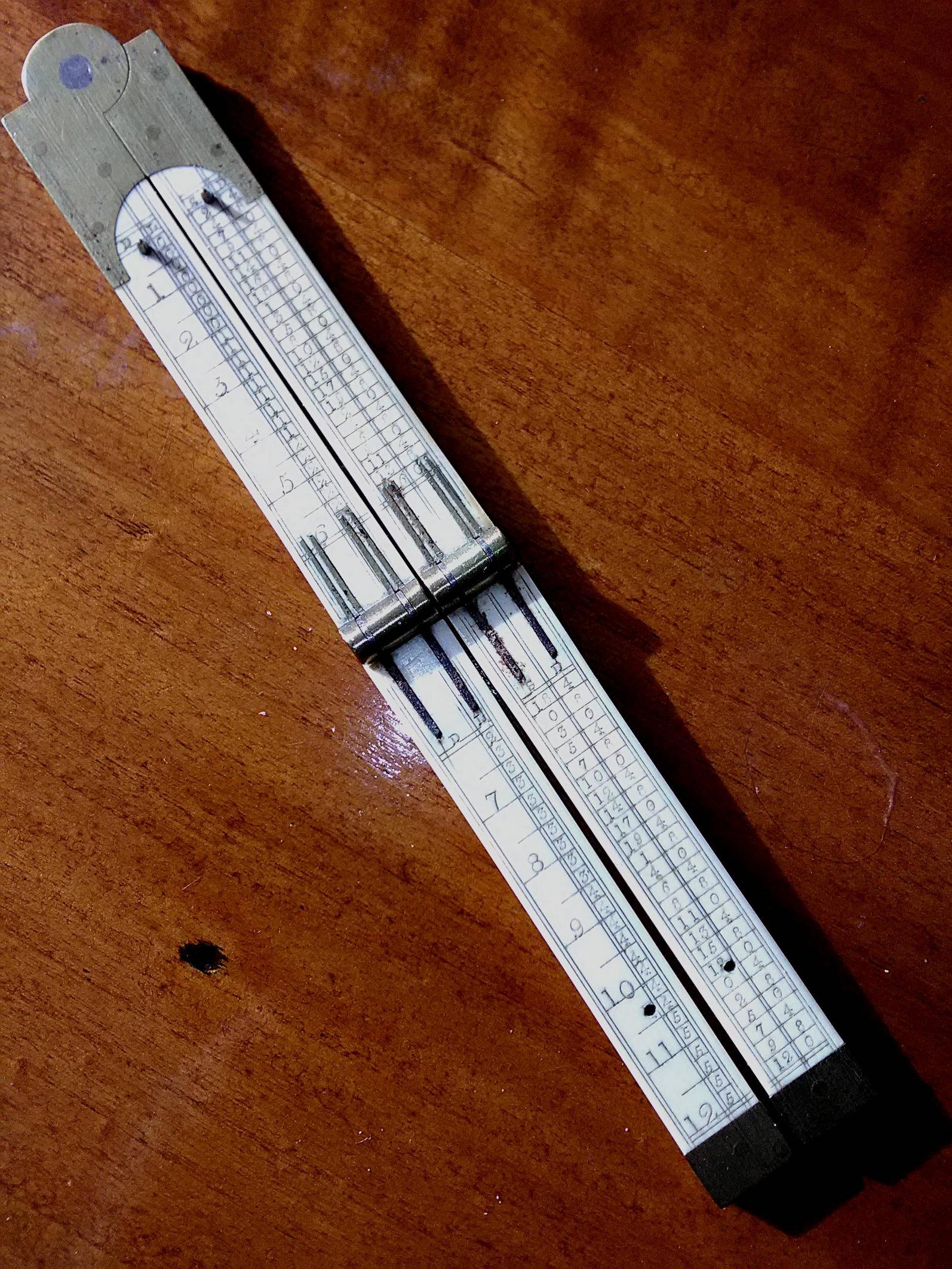 The wooden folding ruler also shown here is a Rabone Boxwood N°1380 (of no particular value or interest I think).

The earliest known owner was a great aunt (born 1876, died 1941); we don't know who (if anyone) owned it before her or how she obtained it. Nor do we know anything about her, other than that she had several brothers and that she never married. This great aunt's father (b.1831, d.1904) was a member of FRIBA (Fellow of the Royal Institute of British Architects).

The ruler is ivory and has, in tiny letters on one side, the name Joseph Mackness. It is unclear if this is the name of manufacturer (Googling hasn't turned up any manufacturers of this name) or the original owner. There are some people with the name Joseph Mackness on Ancestry.com but none seem to fit the likely time-frame (Victorian or Edwardian), and there are no known Macknesses in our family.

Given the numerous examples of ivory and bone folding 'rulers' that can be found online, many for different purposes / professions, it is puzzling that I can't find any examples with D and L S D. This might indicate that it is quite rare, which seems strange if its function was related to prices; (presumably) many thousands of shopkeepers, customs officers etc. would have found it useful, which means it shouldn't be rare.

One explanation suggested by a family member is that it is a presentation item, souvenir or retirement gift, never intended for actual use.

Was this folding 'ruler' used by shopkeepers, customs officers or some other profession? Or is it a presentation item or souvenir?

I'd also be interested if anyone could put a narrower date range on it than (I think) Victorian to Edwardian.

With one hinge folded we see a four-column matrix affording an unusual crosswise reading. It's probably custom work, as none of us have located a similar object online, and isn't really a ruler at all: the discontinuity at the other hinge makes any length measurement onto the second half incorrect. This device had perhaps three functions: to exhibit the high status of its possessor, to look up prices, and to demonstrate fair equivalence to business partners.

As the question states, three of these columns are very likely to represent British currency. In the first column D is demarcated in quarters up to twelve. Physically it quite resembles a centimeter (I see about fifteen D in six inches), but in light of the hinge discontinuity, D represents a measure other than length. We can also rule out diameter, as products sold by it (pots, pipe) aren't priced linearly; those diameters proxy for higher-dimensional figures of volume or surface area.

The value of the D is consistently 9s, 4d, which was the value of relatively pricy stuff like one stone of Prime Joints of English Beef or a week's wages for a lady's maid. The confidence required to engrave a specific price onto a durable tool like this means that the price was fixed by agreement.

To recap, the tool was built for someone relatively wealthy, to repeatedly perform simple multiplication in front of others for whom a large amount of money was at stake. This device is probably a payroll tally for a population of laborers whose wages were set by a union contract. D stands for Days worked.

Days are divided here into groups of six in accordance with Britain's six day work week, and workers would have paydays every week or two, using either the top or bottom half of the device. 9s, 4d per day was quite an attractive industrial wage. Similar amounts were reportedly earned by a Queensland miner, an Ipswich railway laborer, and a London cutlery hawker. If laborers were seen to work six full days for a week or two, they'd earn the very last figure shown on each half of the table: 2l, 16s or 5l, 12s. Wages could evidently be figured by quarter days (not the quarter days of the year) in case of shirking, early dismissal, etc.

Here is my two penn'orth:

Whatever D means, it translates to 9 shillings and fourpence, which is 112 pennies. 112 is the number of pounds in a (British) hundredweight. (These units, shilling and hundredweight, were still taught when I was at school in the 1960's.)

So I suggest that D means pennies. Pennies were divided into four farthings prior to 1960, which explains why there are four entries for every D.

And now we have a conversion from price per pound to price per hundredweight! If a good is advertised at tuppence three farthings the pound, and you want a hundredweight of it, you will find the price in the eleventh row: £1 5s 8d.

This would be useful if you were involved in wholesale buying and selling of any kind of bulk commodity.

Edited to add: You asked about possible dates. Unfortunately the internal evidence is not very helpful. The farthing was around from at least the 13th century until its discontinuation in 1960; the hundredweight was officially defined as 112 pounds between 1835 and 1985.

Some time ago, a relative contacted the British Museum about this item and I have just received their feedback. The museum staff admit it had "several" of them puzzled so they contacted the Museum of the History of Science at Oxford. In sum, they came up with the following:

Here is a listing for a four-fold ruler, but made of wood rather then ivory. It is described as 50 to 80 years old, used by carpenters and similar construction trades:

Every carpenter and builder carried a rule like this with him at all times - slipped in his pant's pocket. At that time they were the equivalent of the now familiar steel measuring tape.

This listing of "woodworking rulers" includes a number of examples in ivory and bone which may be more similar to the one you have.

This one (from a different site, purpose not specified) looks particularly similar to yours, although only one side is pictured. It is dated circa 1880.

I am a drafter by trade and this tool looked instantly familiar to me. Back before computers or caluculators, we used rulers like this. Though the one I used to work with did not have monetary values but different scale options. I am only guessing here but maybe this was a way for carpenter/journeyman to measure and find the cost of a particular job all with one tool?

Not the answer you're looking for? Browse other questions tagged england identification modern occupations or ask your own question.

4
Epoch of an item marked with anchor symbol with the letters N and D
4
Name for a position in a noble household in the medieval period (c.13-14)
11
What is this card, and why does it go “on the hat”?
16
In Edwardian England, did poor families arrange to have their children buried in the graves of unrelated adults?
18
Who is in this c.1866 photo?
15
Who was Frau Dr. Ebersberg?
0
How did 15th century royals identify themselves in England/Spain?