Did the Germans attempt the easier or harder of two possible objectives in the Caucasus?

During the summer and fall of 1942, German Army Group A advanced into the Caucasus pursuant to Fall Blau. This consisted of two armies, the First Panzer Army and the Seventeenth Army.

The advanced started (mostly) south from the Don, to the Maikop oilfields. After that, there were two possible ways to advance. One was "more east than south" to the Grozny oilfields, deep in the mountains, which was the one actually attempted. The other possibility was "more south than east," to and along the Black Sea coast, and along those lowlands to the Turkish border.

I am puzzled by this choice, from a strictly military, (as opposed to economic) perspective. Given the composition of Army Group A (heavy on armor), I would have chosen the southerly lowland route as my axis of advance. Was this, in fact, the more militarily "easy" target? Or was the coast so well defended that "Grozny" was actually the easier target?

I would like to start by asking to forgive me if I sound condescending, I didn't mean it, and I may well be wrong myself, so criticism is welcome.

a quick touch on military/economic goals

First, I'd like to address all those claims about military/political/economic goals in the war. They all sound like nonsense to me. Apparently, Hitler didn't change his goals from "military" to "economic" in 1942. Moscow was no different from the oilfields as a target. The latter were a strategic asset (a commodity) for the enemy, while the former also was a strategic asset, only a service — transportation (let alone a territory with tens of millions of ethnic Russian, hence more loyal, population). Depriving the USSR from the ability to move troops, materiel etc. quickly, via railroad, was of no lesser importance than oil.

The main reason, as I can imagine, behind Hitler's decision to attack towards the oilfields was the fact, that the Russians were definitely expecting another German attempt to capture Moscow in 1942, and as Hitler had chosen in 1940 to attack France not in a way they did in 1914 but through the Ardennes, he must have chosen to attack in the South, instead of trying to attack where he'd tried the previous year¹.

What can start sound condescending, is that from your words it seems that you have a wrong perception of WW2-era warfare, as well as the geographic conditions of the "easy route":

Given the composition of Army Group A (heavy on armor), I would have chosen the southerly lowland route as my axis of advance.

The German army wasn't a medieval army, or even a 17th century one, which had almost all it needed in wagons with it. It couldn't been concentrated in one spot, moving one easy route/road, leaving only small garrisons in strongholds and be ready to repel attacks from all sides. It needed constant supplies.

I cannot give a link to a original resource, but I heard that during the so called Blitzkrieg (of which the German generals had no idea at the time) a German tank division by demands of "field manuals" had to carry with it a supply of munition for two days of battle of "medium intensity". Not a very precise figure, but the idea is that it needed a constant supply, even a day without one was a serious problem.

That need for supplies (for all armies in that war) gave a lucrative tactical goal to pursue (especially the Germans seemed to be acting that way): instead of trying to destroy the enemy face to face with strength ratio as the mean on the theater (i.e. if you have a million men and the enemy has two, the ratio is 1/2):

In summary, all armies should have been worried about been encircled in that war. And the easy route made it more easy for the Red army to do exactly that (more on that below).

the hard route vs. the easy one

If I understood you correctly, this is what happened (left) and what you call the easy route (right). As far as I know, many historians, German generals blame Hitler for his decision to split his forces. What you actually call the easy route is not only to split the forces, but to move them apart as much as possible, leaving the enemy between them to attack them separately. 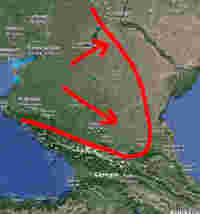 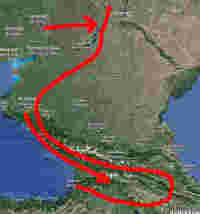 If you didn't mean the variant on the right, but something like this: 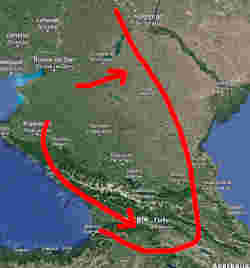 then the easy route still would have had serious deficiencies (apart from terrain ones, more on that below). The main one was that even though the enemy would have been absent between the main "arrows" there still would have been the Caucasus mountains, which would've made the mutual support for the split forces not much easier, then with the Red army there. Also that variant deprived the Germans the possibility to encircle and destroy the Red army forces (situated right on that easy route).

not so easy route

Then I think, you are wrong, when you call the southern route an easy "low land" one for the Germans "heavy on armor". One can look at the terrain, for instance at Google maps / street view. It ain't a stripe of plains 100 km wide, though even if it was, it could have been cut off relatively easy, so it would have been dangerous to the Germans even in that case. It is a rocky, bushy terrain, with cliffs right to the water line. Look at this satellite image of Novorossiysk and surrounding areas to the south and east. There is virtually no arable land. It's forest and rocks. One can view street view images also, only he should have in mind that the road on which the Google vehicle was riding wasn't there in 1942. 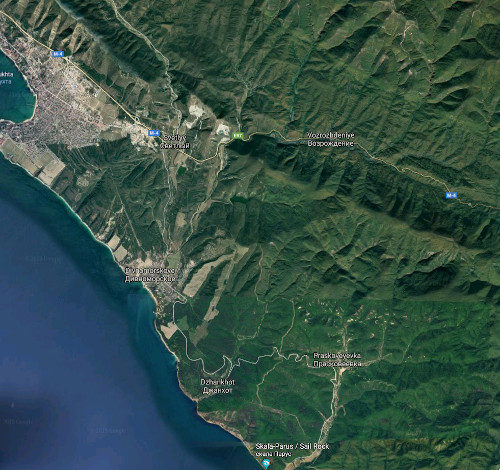 With that conditions, had the Germans chosen the easy route, they would have either (and probably both):

The last point needs a bit elaboration. You can't just move your troops quickly in columns in the vicinity of the enemy, you need to know, where the enemy is, so you need reconnaissance. In steppe it was achieved relatively easily with the air reconnaissance and the land one with light tanks, automobiles. So the troops really could move fast.

In the terrain on that easy route there was no way to use automobiles, light tanks for this purpose. And forests made it difficult to use the air reconnaissance too. So the Germans could have relied only on their foot soldiers, and the main forces (even with tanks, trucks) could not have moved faster than them, since it would have been a grave risk to move blindly.

¹ I must admit, that Wikipedia contradicts the claim about the Russians expecting the Germans to attempt to capture Moscow, since it states that in the Second battle of Kharkov the Red army had 765,000 men and in the First Rhzev operation they had less than 500,000. But I would rather dismiss the numbers, than my own common sense, since in the USSR, especially during the Khrushchev era it was a widespread practice to distort history in a way favorable to Zhukov et al. I cannot touch the topic here, but Zhukov most certainly destroyed the order to put the Army on alert before the German attack in June, 1941. (I gave a couple of proofs for that claim in another answer, namely quotes in that answer) The point is, one should not blindly trust those numbers, which most certainly come from Soviet, Khrushchev era historians.

After the failure of conquest Moscow the previous year. Hitler objectives mostly were economical and political instead of military. That's why the permanent negation to yield territory to improve military position.
Now, regarding to Fall Blau, german main objective was Maykop, Grozny and Baku, where main oilfields are located, Black Sea coast did not have oilfields. Therefore, military objectives where defined to reach those places.
The following years, Hitler insisted on keep Krivoi Rog and Nikopol region (rich on minerals), later on he tried to keep Lake Balaton oil fields in Hungary. Because economic objectives were more important than military ones.

Main motivation behind drive into Caucasus area was capture of oilfields, first those around Maykop, then Grozny and finally biggest of them around Baku. This is of course easy to understand, Germans needed oil for their armed forces and industry(to lesser extent) and wanted to deny it to their Soviet enemy.

Path to these objectives is also relatively straightforward, it goes north of Caucasus Mountains, first Maykop then Stavropol, Grozny and finally Baku. Open steppe terrain in that region did allow Germans to use their mechanized forces. They managed to capture Maykop but its oilfields were heavily damaged by Soviets before leaving. By late October they were closing on Grozny and oilfields there came under German air attacks. Baku was mostly left alone, it was out of range of German fighter escorts, and Soviets gathered substantial air-defense forces there. Therefore, they simply decided to use their limited air assets elsewhere.

Main problem for German advance into Caucasus area were Caucasus Mountains themselves and Black Sea. Soviet Black Sea Fleet was still dominant in the region. Black Sea Fleet, as well as whole Soviet Navy at the time, was somewhat obsolescent and vulnerable to air attacks. However, it was larger then German and Romanian forces in the area, which consisted mostly of destroyers, torpedo boats, and some lighter submarines. Germans also had some landing craft and barges, but as a whole insufficient for large scale amphibious operations. Germans and Romanians also didn't have troops specially trained for such operations so they never attempted them. Also, Black Sea coast from Novorossiysk to Sochi is mountainous, therefore relatively easily defensible from attacks either from sea or coastal advance. In fact, German advance on Black Sea coast was stopped after they captured Novorossiysk and front remained static well into 1943.

Germans of course realized that moving towards their main objective with right flank exposed is not very wise. Therefore, they did attempt to cross Caucasus Mountains from north to south at several places, and emerge on Black Sea coast, cutting of Soviet forces westward. Largest of these attempts was aimed at port of Tuapse, and it lasted until the end of November 1942. Germans suspended further offensives when their 6th Army was surrounded in Stalingrad, and in January of 1943 started with evacuation of Caucasus region, abandoning plans for capture of oilfields.

12
Is there documentary evidence that Stalin intended/prepared to fight Germany after the Nazi-Soviet pact?
3
How strongly defended was Baku in 1942?

12
Did the Germans use a "Verdun"-like strategy at Stalingrad?
21
Could the Soviet Union have continued fighting World War II without Caucasus oil?
6
How (and why) did Hitler create "the world's largest traffic jam?"
3
Did the Soviets have an alternate source of oil in Iran during World War II?
3
How long might the campaigning season in the Caucasus have lasted for the Germans?
5
Did the Germans "mix up" Army Groups A and B during Fall Blau?
7
Did the Germans consider an amphibious landing for Fall Blau?
11
Why did Fall Blau start at Voronezh instead of further south?
1
How and why did the progress of Army Group A differ from what the terrain in the Caucasus might suggest?