Identification of harbor and ships 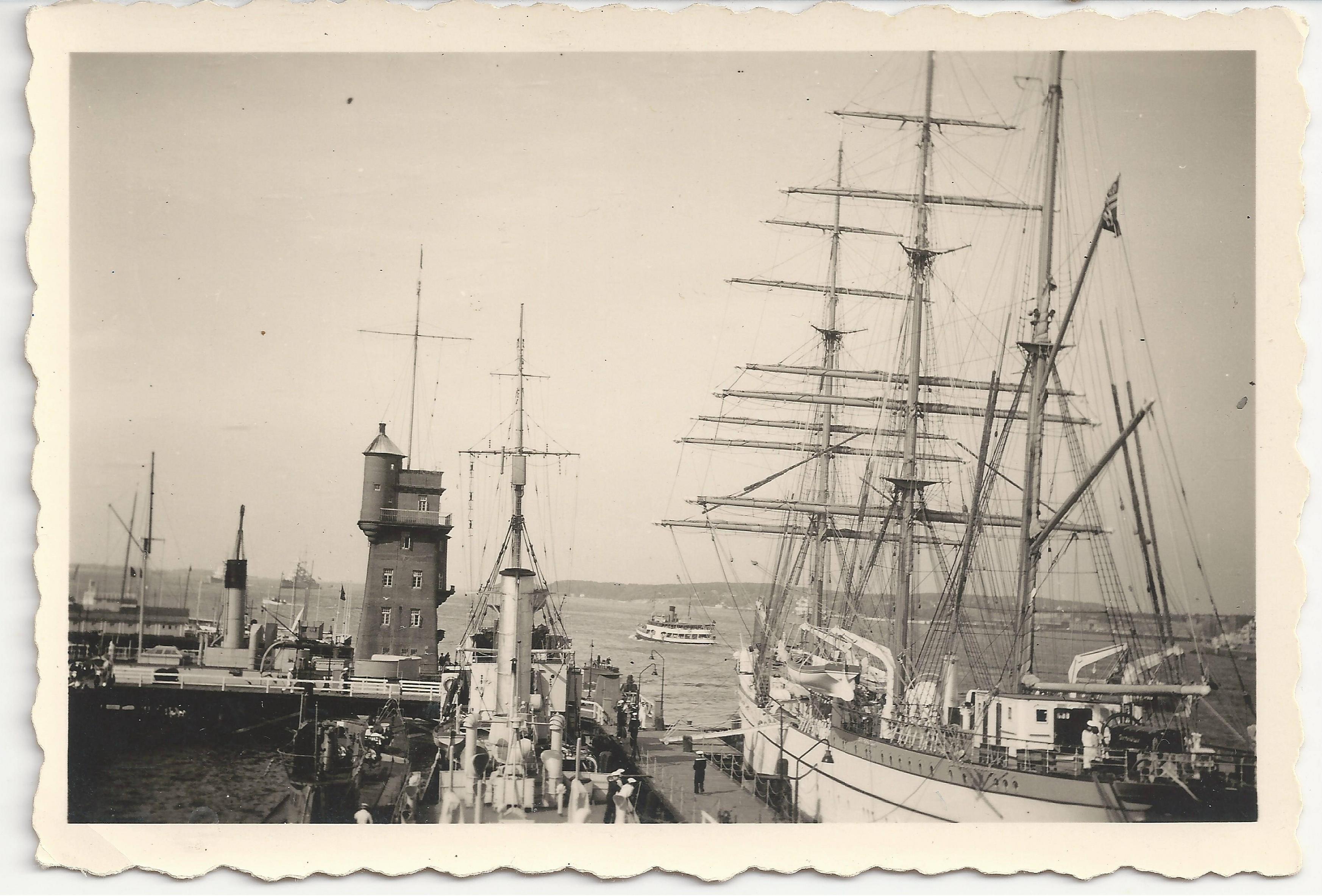 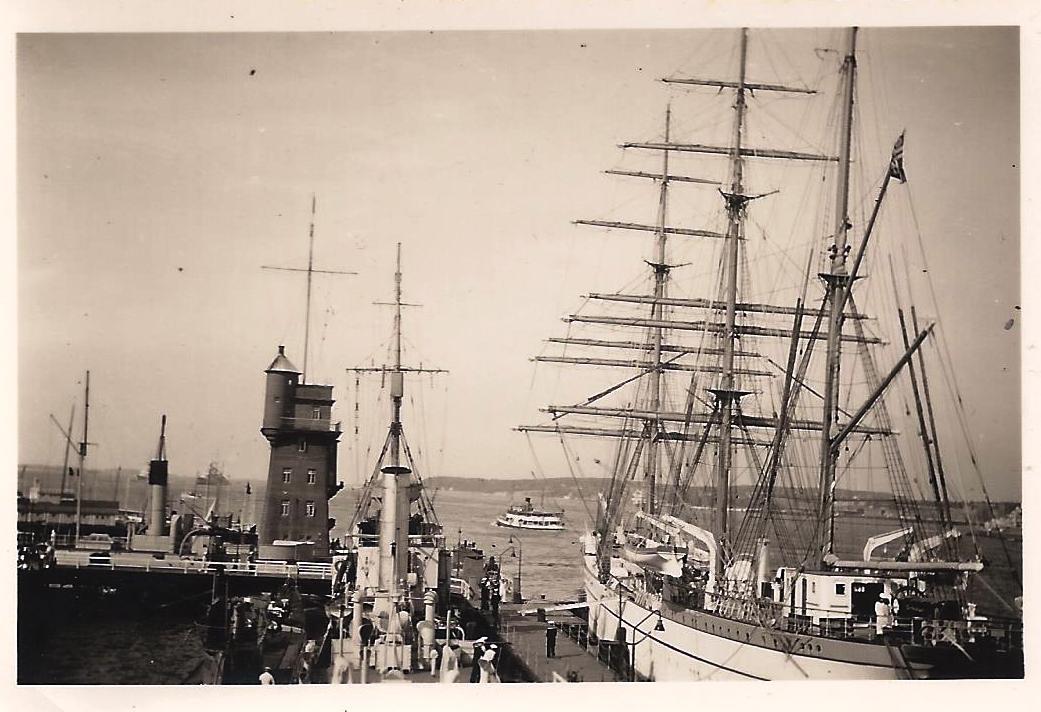 This is Kiel, before 1958. The signal tower was build in 1912 and dismantled in 1958. It is located at the Kiellinie on the Blücherbrücke: 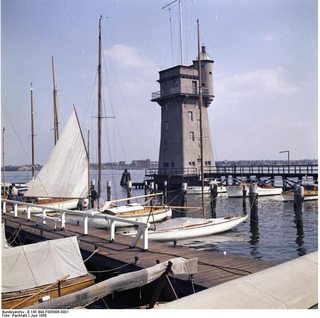 It had to be torn down as it developed some Pisa-esque characteristics after the war. 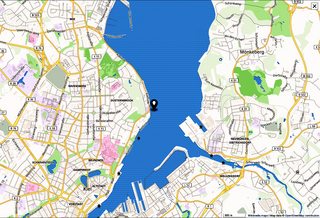 As it was a frequent guest at exactly this place, I'm going out on a limb and make a wild guess to say the ship was probably the Gorch Fock: 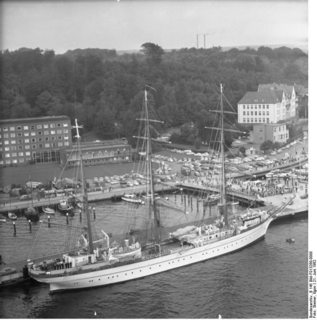 Note that the ship currently named so was only build in 1958. The predecessor is from 1933. 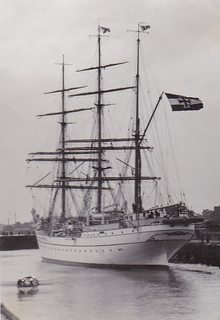 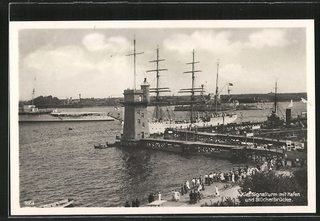 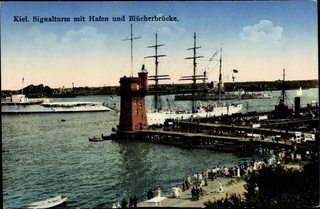 If it is the first Gorch Fock, then this would date the photo to 1942–1944, when it was stationed at Kiel (according to an unsourced Wikipedia entry, or an history-oriented newspaper but sources seem a bit murky on details), afterwards being transferred to Stralsund while she was again in sea-going service. 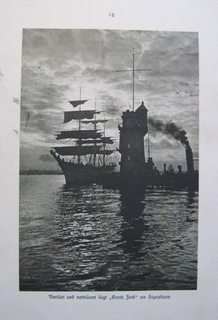 As the slightly later built sister ships look quite similar, the ship in the orignal foto may also be the Horst Wessel or Albert Leo Schlageter.

As it happens, for example the Horst Wessel was at least in 1943 also in Kiel and also seems to prefer anchoring a Blücherbridge when in Kiel and was by 1944 in Stralsund, where it also was in 1941….

Since these ships are so similar and details on the original fotos – whether pictoria or regarding date – are still not enough – and well, yeah, ships can move, a lot – for me it seems undecidable which one of the three most probable candidates exactly this is.

Plus, the perspective of the original photo doesn't even rule out that two of these ships were moored there at the same time: 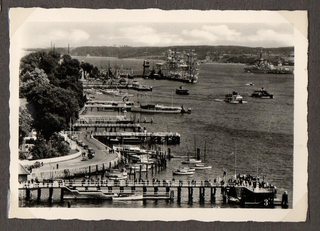 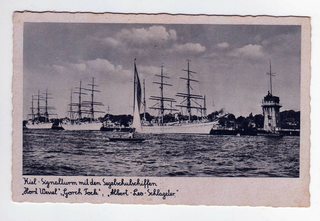 Data for the ships, according to German Wikipedia:

Concerning the sail plan, most pictures of Gorch Fock in the 30s do show a 2 sails on the mizzen mast, while the other two ships have three, but it's unclear whether or when a re-fitting might have taken place. The current state of the Gorch Fock shows another difference there:

That would point in summary to any one of the three German Gorch-Fock-class ships, dated by flag flown in original picture to after 1935 and obviously before May 1945.

For comparison, pictures of all three ships:

Further hints: there seems to be a coastal vessel and an early u-boat type to the left of the sailor. The two warships in the distance is another possible clue, but too hard to make out all. The presence of a launch type small boat ("Barkasse"; modern version) for private mass amusements or personal transport from A to B across the bay. Both types of transport should be much rarer after July 1944 when allied air raids hit the place and eastern landing piers.

In the centre of the picture might hint at a date somewhat before 1945 when things got tight and the clothing of all the sailors visible might shift the latest date a few weeks before the end of 1944 as well, when things got cold.

Not the answer you're looking for? Browse other questions tagged world-war-two identification ships german or ask your own question.

11
Why did fighter pilots wear their hats lopsided during the World Wars?
12
How many suicide attack (kamikaze) pilots died and how many of them successfully hit ships during World War II?
28
What was the longest a World War II submarine stayed at sea without being resupplied at a port?
15
Who are the people walking with Hitler?
2
Where can I find data on the amount of fuel carried by WWII Warships and what their operational ranges were?
9
In the 18th century, who built ships built using two-pointed nails?
7
What post-photographic 19th US century dark skirted stripe embroidered jacket, hard brim and top forage cap, light trousers, sword uniform is this?
42
In the Battle of the Coral Sea, how could two Japanese scouts grossly mis-identify two American ships?