Luis Argüello was California's first Mexican governor. He died in 1830 and was buried next to San Francisco's Mission Dolores. His grave marker doesn't appear contemporary with his death, though. I don't think there were any stonemasons in California in 1830. There are no other markers from the same time in the cemetery, and while the headstone is engraved in the Spanish language, it contains several orthographical errors. All this suggests to me that it was engraved after California was taken over by the United States. The gravestone is credited to "J. Daniel, S.F." Its spire fell over in the 1906 earthquake, but stands upright today.

When was Argüello's monument built and who paid for it? 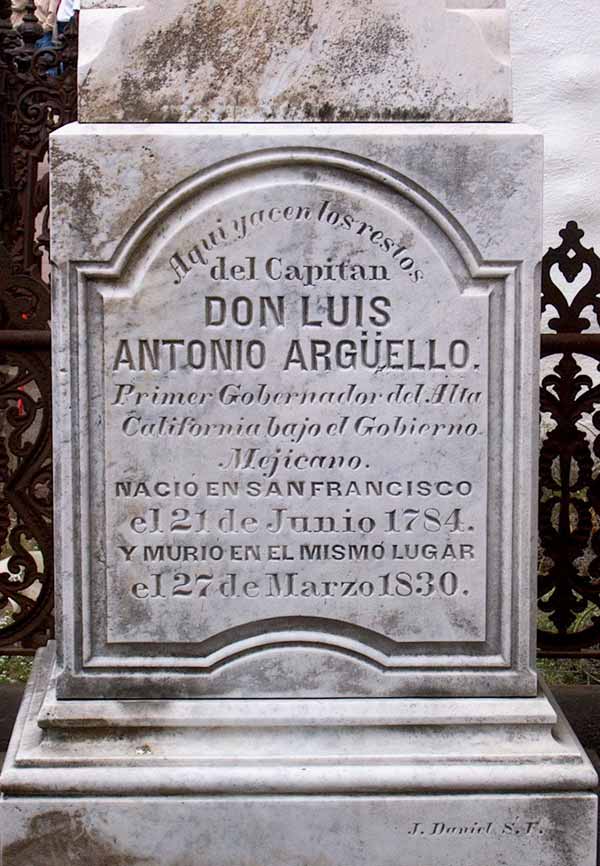 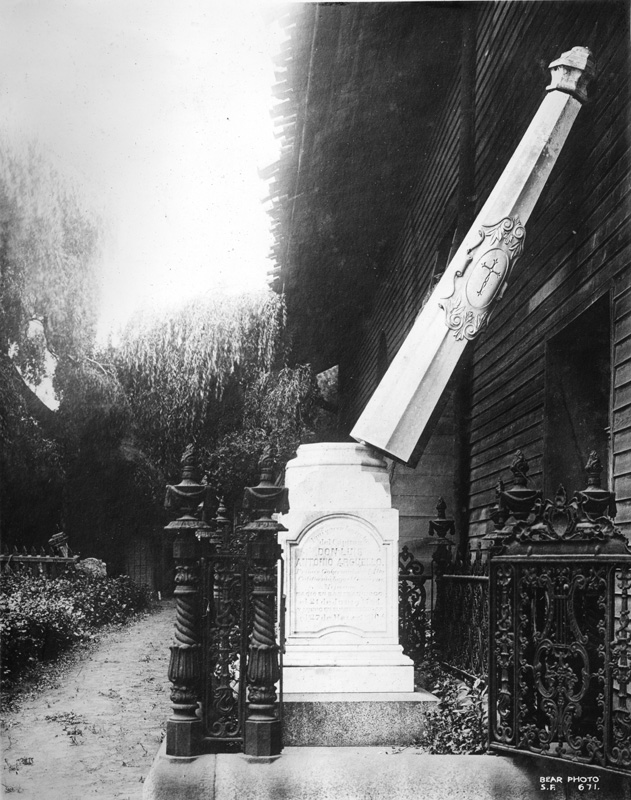 I'm afraid that the best I have been able to do so far is narrow down the timeline for this, and provide a little more information concerning this monument. Lets look at what we can determine. We do have confirmation of the burial, From the book San Francisco or Mission Dolores by Zephyrin Engelhardt, which on page 280 states

"On March 28, 1830," Fr. Thomas Estenaga notes in entry number 5158, "the body of the captain of this presidio of San Francisco, Don Luis Antonio Argiiello was interred in the cemetery. He had received for his death the holy Sacraments of Penance, holy Viaticum and Extreme Unction."

So far the oldest reference to this monument I have uncovered is from an article in Sunset magazine, Old Mission Idyls, by Charles Warren Stoddard, published in 1906. This article discusses the history of the mission, but has one paragraph with some useful information:

If we look at the Wikipedia page for Stoddard, we find that he was in San Francisco in 1855, and the wording of an earlier paragraph would seem to confirm 1855 as the date he was puzzling over the Spanish text on the monument.

This possibly gives us a minimum earliest time of 1855 for the presence of at least some form of a monument to Don Luis Arguello.

Can the name on the bottom of the monument help, J. Daniel?

I have found a likely suspect by the name of John Daniel, listed in the 1880 US census as a marble Worker, born about 1834 in Canada to Scottish parents. This John Daniel appears in a business directory published in 1872, The Buyers' Manual and Business Guide: 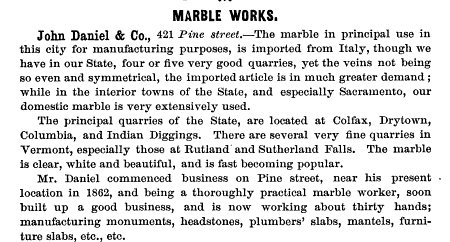 So John Daniel, who made monuments and headstones, had established a business at 421 Pine Street in San Francisco in 1862. This sets a more definitive oldest range for the appearance of the monument we see today, 1862.

Can we confirm this photographically? We do seem to have evidence indicating the existence of large stone monuments in this cemetery in the mid 1850s. This image from the Wikipedia page for the mission, is supposed to be from 1856: 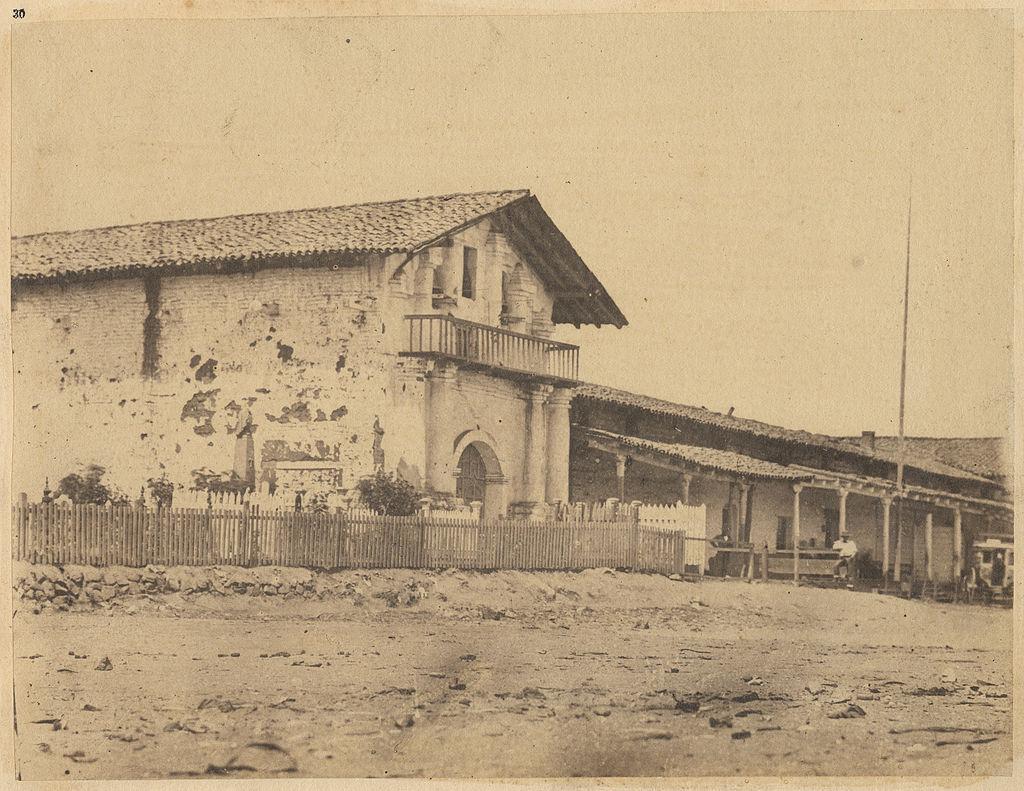 Though the angle of the image does not appear to show far enough back to include the Arguello tomb, it does show a large obelisk-type monument in the front area of the cemetery. This indicates the availability of such works by this time, and lends credence to the eye-witness report by Stoddard of a monument for Arguello in 1855. (Though this is obviously not the same monument, it does give a reference object for comparing other images to).

What is the earliest photograph I find showing the existing monument? First we need to figure out just what we are looking for. This monument has changed form at least three times that I have found.

So the earliest shape we are looking for is a tall obelisk-like spire with an oblong top.

The earliest photos I have found, (so far), showing this shape is from a group of photos hosted at OpenSFHistory. Several photos dated 1865 are unclear concerning the monument, but one dated 1875, showing the nearly completed brick church (destroyed after the 1906 quake and replace with the current building) includes the monument showing the football-shaped capstone: 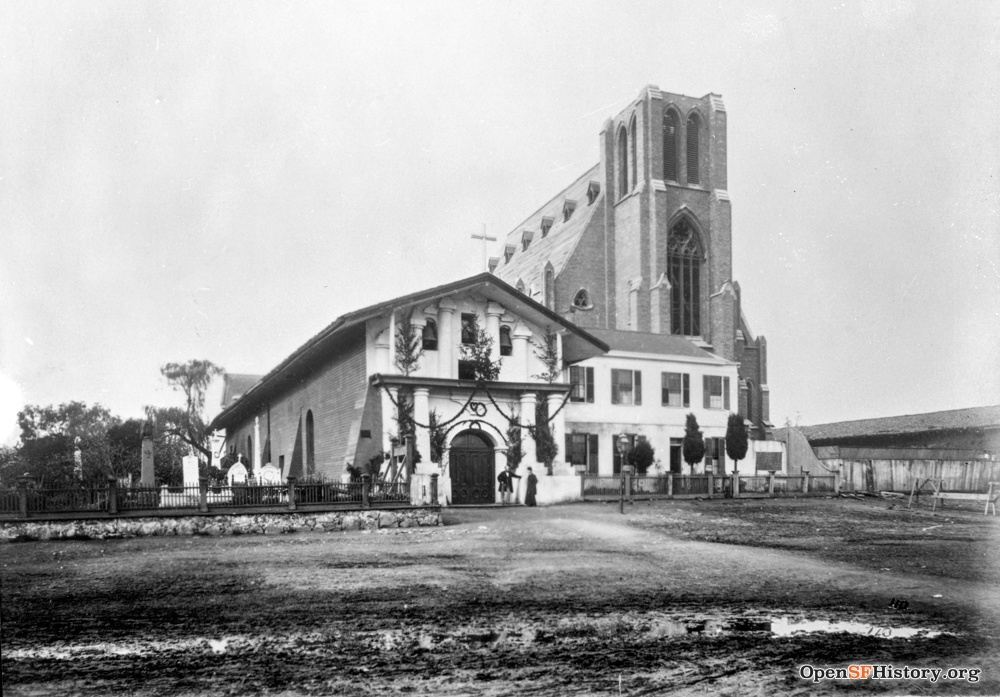 So, to conclude with what I have gathered so far; the monument has changed cosmetically several times, the oldest form of which can be identified in photos dated to the mid 1870s at the time of the new brick church. The monument was crafted by John Daniel, who established a marble-working business in San Francisco in 1862. (With the current evidence I have to discount the Stoddard remembrance as possibly seeing an earlier version of the monument). Current earliest estimate as to when the current monument appeared is 1862-1875.

This is a work in progress...

Not the answer you're looking for? Browse other questions tagged united-states california mexico death monument or ask your own question.

31
When was this photo of Mission Dolores *actually* taken?

6
First recorded use of a traditional tombstone?
4
Who left Fort Ross to defect to Mexico?
5
Who was the first foreigner to be naturalized as a Mexican citizen in Alta California?
1
Who accompanied Canónigo Fernández to Mexico City in 1822?
2
Who was the Gold Rush memoirist James G. Ward?
1
Who were the members of Hartnell's _Compañía Extranjera_?
1
When was the property tax introduced in early Mexico? Who paid?
4
Who was the Irishman that betrayed Coronel's gold claim?
2
Who named San Andreas, California?
4
Who were the earliest Californian university students?