There is a quote by Makarios III from 1964 (during the Crisis of 1963–1964), regarding a possible Turkish intervention in the island. It has been very infamous in Turkey, and has gained attention again with the vandalism on a Cyprus memorial in Istanbul. The quote is;

The meaning of the quote has always been suggested as a threat to annihilate the Turks on the island, which is a very divisive and destructive thing to say as the president of the Republic of Cyprus. I was unable to find any reference to such quote apart from some very untrustworthy Turkish forums & websites. The only "proper" source I was able to find is the website of Turkish Foreign Ministry.

How accurate is this quote? I know during that time the inter-communal fights were so frequent, and many Turkish villages were destroyed, and this quote from him, as the leader of the Greek Cypriots, whose words carried weight, might've had more damage and added fuel to an already flaring fire. I'd like to see if there is any credible source that supports the existence of it.

The exact quote or close variants of it never show up with a proper source attribution. That is usually a sign that those typing these words cannot name one. And I tend to dismiss all of these cases as abuse and severe distortions or even malevolent inventions.

The searched sources included search engines, newspapers from 1964, a biography of Makarios, research articles about this conflict that is so poisoned by nationalist 'thinking'. Never was there anything close to that formula in non-Greek and non-Turkish sources, not even in magazines known for having a knack for quoting the most colourful soundbites with undue preference.

If anything approaching exactness for this 'quote' is given, the it is the date of August 1964. In October, after Turkish air attacks took place we read this analysis:

Makarios's obsessive determination to withstand all pressures for a compromise solution is understandable only if it - is realized how deeply he feels the stigma of having signed the London - Zurich agreements which brought the struggle for liberation from British rule to a close in 1959. The agreements, worked out among Britain, Turkey and Greece, precluded both union of Cyprus with Greece and partition of the island. They granted Cyprus independence —with the option of joining the Commonwealth—but gave Greece and Turkey the right to station troops on the island and to intervene if the status quo were altered. They provided for a Constitution which gave the Turkish minority of about 100,000 powers virtually equal to those of the Greek majority.

Makarios knew that it was a bad solution, but nevertheless he signed on behalf of the Greek Cypriotes after heavy pressures had been put on him by the Greek and British Governments. He says, “I had no choice, for it seemed the lessee at two evils. The factor which forced, me to agree was to avoid the continuation of bloodshed.” Yet on his return to Cyprus after the negotiations in Zurich and London he heard the word “traitor” shouted at him. He who had engineered the struggle for liberation, who believed he had a divine mission to liberate his people, heard the one word which could hurt his very soul. This is the stigma Makarios must now erase. […]

Makarios did not need much persuasion. He felt badly let down by the United. Kingdom, which had not supported his “13-point” plan, and he was deeply suspicious of the United States treaty commitments to Turkey. In face of the Turkish threat of invasion, he felt forced to seek help from wherever he could get it.

After the Turkish air attacks on Aug. 8, when Greece was unable to prevent the Turkish strikes and even criticized Makarios for taking action that might involve Greece in war, the President felt he had no alternative but to make public overtures to both Cairo and Moscow. He wanted planes, airfields, antiaircraft weapons, naval vessels and. most of all, an undertaking by the Soviet Union to guarantee the territorial integrity of Cyprus. What he will get is still an open question. […]

In recent months Makarios has been under heavy criticism by some Ministers for his refusal to take strong action against the Turks. He has also been reluctant to take firm action against his own people who have flouted his orders and those of the Minister of Interior. Abroad, he is believed to be a man ready to condone violence and bloodshed; at home he is known as a man who will almost sacrifice all to avoid bloodshed.
–– "Cyprus Problem = Makarios Problem", New York Times, Oct. 18, 1964

However, in this case the above heuristic might benefit from another quote:

Indeed up to the de facto division of Cyprus by the intervention/invasion of the Turkish army in 1974, the Greek-Cypriot official history and narrative is nothing but legitimization of the demand for the unification of Cyprus with Greece. Therefore, one of the main characteristics of the Greek-Cypriot text- books has been the construction of the concept of continuity of the Hellenism in Cyprus since ancient Greeks. Emphasizing the influence of the ancient Greeks on Cyprus underestimates all the political and cultural links with the other eastern Mediterranean countries (Kullapis,p. 281).

Another remarkable point is the use of the concept of "Cypriots" exclusively for the Greeks. For example one reads that:

"[…] ultimate aim of the Cypriots during the colonial was nothing but unification with Greece" (Kullapis, p. 283).

The multiethnic structure of the population has been systematically ignored. The Turkish-Cypriots only appear in the Greek-Cypriot textbooks after the failure of the national aim of unification with Greece and the emergence of the independent Cypriot state, and this in a biased and ambiguous way. It is interesting to note that the president of the bi-communal Cypriot state Archbishop Makarios used to refer to the Turkish-Cypriot citizens as "the co-habitant element" ("τσ συνσικον οτσιχεισω").

Between 1960 and 1974, there was no proper use of the word "Turkish-Cypriots". The Greek-Cypriot textbooks describe the Turks who came to Cyprus during and after the Ottoman occupation (1571) as "basically lazy and greedy". For example: "Life without hard work and suffering is not possible […] unless we do injustice to the others and live on theirexpenses. The Turks of Cyprus used to do so" (Kullapis, p. 284).

This instability of the post-colonial state fuelled the ethnic conflict and tended to promote a heightened sense of ethnic identity, which in turn strengthened the aspirations of the Turkish Cypriots for a separate ethno-national identity. The persistent advocacy of Enosis by the Greek Cypriots despite the establishment of the Cypriot State, supported the myth that two communities can not live together. President of the Republic of Cyprus, Archbishop Makarios was not hesitant to state in August 1964, during the inter communal clashes were continuing that his “ambition was to [...] unite Cyprus integrally with Greece, and then the borders of Greece will extend to the shores of North Africa” (Patrick, p. 28). This ethno-centric view of Cypriot territory was nurturing the fears of Turkish Cypriots. So, became the Turkish Cypriot ethnic nationalism the vehicle for a new national identity which drew many members of the community, involved in the conflict, into a new type of politicised vernacular culture and created a different kind of participant society. In this context the separatist ideology and movement itself was the prototype and harbinger of a new society. Its cells, schools, army units, welfare associations, self-help groups, labor unions, as well as its songs, flags, poetry, sports, arts and crafts, all presaged and created the nucleus of the future separate ethnic community and its political identity. It is important to note that in this process the Greek Cypriot community was the main points of reference for the Turkish Cypriot identity. The Turkish Cypriot “we” was structured in an violent conflict with “them”, the Greek Cypriots and the identification with Turkey, which was actively involved in the military affairs and overall socialization of the Turkish Cypriots, reached its highest momentum.
–– Niyazi Kizilyürek: "The politics of identity in the Turkish Cypriot community: a response to the politics of denial?", In: Méditerranée : Ruptures et Continuités. Actes du colloque tenu à Nicosie les 20-22 octobre 2001, Université Lumière- Lyon 2, Université de Chypre. Lyon : Maison de l'Orient et de la Méditerranée Jean Pouilloux, 2003. pp. 197-204. (Travaux de la Maison de l'Orient méditerranéen, 37).

And how this quote that claims "will not find" – that seems indeed preferred by Turkish nationalists exclusively – came into being is perhaps found in sources like these: 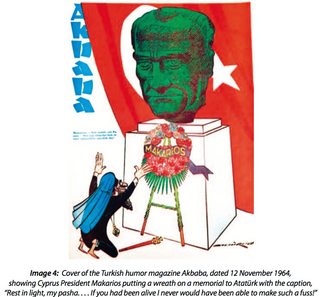 "We will, we will, rock you!" –– the Iranian Constitution

Not the answer you're looking for? Browse other questions tagged turkey greece cyprus or ask your own question.

10
How did ethnic Turkish people embrace Islam?
12
What happened to Muslim spouses who converted to Christianity during the 1923 Graeco-Turkish population exchange?
8
Did Reza Shah Pehlavi know about Turkish offer to restore Ahmad Shah Qajar?
26
Is rye bread Turkish?