What uniform is my ancestor wearing? 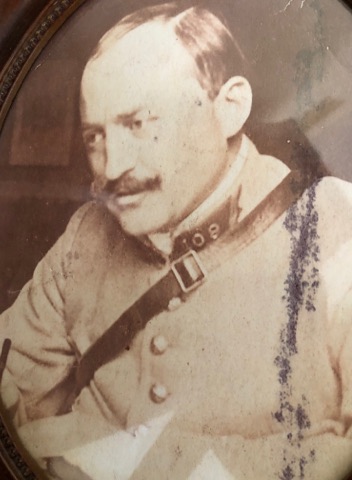 I believe this man is an ancestor of mine, the picture was shared with me by my father 2nd cousin - whom we found through DNA matching. She does not know his name. I have several ancestors who were in the French military, so trying to narrow it down.

Related: Can anyone help identify this French military uniform?

It would appear that this man is wearing a French army light-blue (bleu horizon) M14 or M15 jacket, see this pdf link with soldiers of the period in similar uniform (Page 9, Fig 24). His lack of epaulettes seems to indicate that he was not an officer at the time of the photo. On the collar the number 108 indicates that he is of a regiment with the number 108. I have found two possible regiments with that number; the 108th infantry regiment (108e régiment d'infanterie) and the 108th heavy artillery regiment (108e régiment d'artillerie lourde). The colour of the collar patch would help to determine which regiment the man belongs to as this would indicate what branch his regiment was in. The artillery regiments maintained the red (garrance) backing throughout the war, whereas, the infantry regiments started with red (garrance) backings, switched to yellow (jonquille) in December 1914 and then in April 1915 it was switched again to light-blue (bleu horizon).

Now based on this information I would believe that the man belongs to the 108th heavy artillery regiment (108e régiment d'artillerie lourde) as the red of the collar patch would come out darker on the photo than the light-blue of his uniform. The accolades and stripes (soutaches) also lend me to believe that the photo was taken of him in an artillery regiment post December 1914, at the earliest.

You can find the 108th heavy artillery regimental diary for the 1914-1918 period here and a few photos, in two albums, pertaining to the regiment here. You can also search this database for the man in question if you have a name.

The 108th infantry regiment is a rather old one having been created during the 1791 reorganization of the infantry corps during the early French Republic, from a regiment of the Ancien Régime. Here is the regiment's diary for the years of 1914-1918. It is a pdf online, in French, of course.

4
Can anyone help identify this French military uniform?