Has chattel slavery ever been used as a criminal punishment in the USA since the passage of the Thirteenth Amendment?

The Thirteenth Amendment to the US Constitution provides (my emphasis):

Section 1. Neither slavery nor involuntary servitude, except as a punishment for crime whereof the party shall have been duly convicted, shall exist within the United States, or any place subject to their jurisdiction.

Section 2. Congress shall have power to enforce this article by appropriate legislation.

This clause seems to indicate that the legal status of chattel slave whose use had triggered the passage of this amendment was not fully abolished by it, but that this form of slavery could be imposed upon criminals as part of their sentence.

Did this ever happen?

I am very much aware of human rights issues surrounding the use or abuse of prison labor by governmental agencies and private correctional companies. This quesiton is not about that, but about true, pre-Civil War-type chattel slavery. That is, did a court ever tell a defendant something like, "We find you guilty of Second Degree Aggravated Mopery with Intent to Do This and the Other Bad Thing, Third Offense. You are hereby sentenced to a life of chattel slavery and shall be auctioned off in the town square at high noon tomorrow."?

Yes, but for fixed periods of (for example) six months or 1 or 2 years rather than for life. This section of the 13th Amendment, ratified on the 6th of December, 1865, was controversial from the outset. Slavery Under the Thirteenth Amendment: Race and the Law of Crime and Punishment in the PostCivil War South by Peter Wallenstein in the Louisiana Law Review (vol 77, No. 1) has this example from Maryland of the punishment of slavery being imposed:

On December 8, 1866, in Annapolis, Maryland, a crowd gathered at the county courthouse for an auction. A recent advertisement in the Annapolis Gazette had called the public’s attention to the upcoming event with the language “Public Sale . . . a Negro man named Richard Harris, for six months, convicted at the October term, 1866 of the Anne Arundel County Circuit Court for larceny and sentenced by the court to be sold as a slave. Terms of sale—cash.” 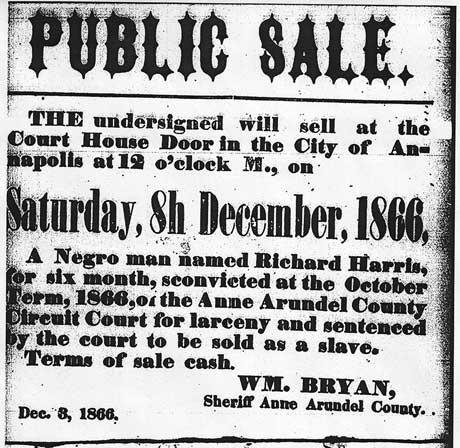 Public domain, from unpublished congressional digest. Source: The inseparability of capitalism, racism, and imprisonment: an interview with Dennis Childs

Other examples mentioned (all black, unsurprisingly):

The sentence was not for life but rather for a number of years.

Whether before or after the “end” of slavery, these “slaves” were not to be held in perpetuity, but for a period of years. Even after all black Marylanders had moved into the category of free people, the statute lost none of its ferocity, nor did it shed its racial specificity. These circumstances could exist because the Thirteenth Amendment expressly allowed state actions such as those taken by Maryland authorities.

Abuses appear to have been widespread, with Republicans at the time protesting that, although the letter of law was clear, the spirit of the law abolishing slavery was being "avoided and got around by these cunning rebels."

In 1866, many Republicans complained that former Confederates were abusing the crime exception to impose slavery even for minor crimes....Representative Henry Deming complained, “[U]nder the exceptional clause (‘except as a punishment for crime’) reconstructed North Carolina is now selling black men into slavery for petty larceny . . . .”

Your question is trying to be so precise that it embeds its own answer. You ask:

This quesiton is not about [the human rights abuse that is convict leasing], but about true, pre-Civil War-type chattel slavery. That is, did a court ever tell a defendant something like, "We find you guilty of Second Degree Aggravated Mopery with Intent to Do This and the Other Bad Thing, Third Offense. You are hereby sentenced to a life of chattel slavery and shall be auctioned off in the town square at high noon tomorrow."?

However, one of the salient features of chattel slavery in the US was that it was an inherited condition--any child born to an enslaved mother would be enslaved themselves. But enslaving the child would be a violation of the 13th Amendment. Therefore it would not be possible to recreate an exact replica of antebellum chattel slavery, even if you bound someone to "involuntary servitude" for life, because even someone enslaved through that loophole would not pass that status to their children.

That said, I think you're parsing this too finely. When you have no rights to withhold your labor, a three-year sentence can easily be a life sentence if whoever purchases/rents you sets you to sufficiently dangerous work. Or decides to move you across the country. Or provides so inadequately for your welfare/withholds medical attention from you such that you die during your term. All of which are ongoing processes in present-day prisons in the US. There are too many potential actions which render the distinction between de jure antebellum-style chattel slavery, and the abuses which continue in the US every day today, irrelevant.

Not the answer you're looking for? Browse other questions tagged united-states slavery crime us-constitution justice or ask your own question.

10
When was the last time someone was condemned to slavery as a punishment in the United States?

20
Has the United States ever been formally condemned by the United Nations?
1
Has the accounting services industry ever been disrupted in the U.S.?
3
Has the USA ever taken unilateral military action?
6
Have US troops ever been lawfully quartered in private homes during wartime under the Third Amendment?
2
Has The USPS / APWU Ever Had A Strike Since 1970?
1
Before the Civil War, did the USA ever offer something like a "5-year plan" for the South to abolish slavery?
14
Has Section 2 of the 14th amendment ever been enforced?