What was Richard Owen's status within the Royal Society in 1858?

I'd like to know if Sir Richard Owen was still a distinguished fellow of the Royal Society by 1858.

The information I have collected is controversial. The RS website shows his being VP in 1849-1850 and 1857-1858 and receiving the Royal Medal 1846 and Copley Medal 1851. However, other sources say in 1846 he was voted off the councils of the Zoological Society and the Royal Society on account of the Chaning Pearce scandal on Owen's paper on belemnites. The book The life of Richard Owen does not shed much light on this issue.

Could anyone give me more precise information?

Richard Owen was a Fellow of the Royal Society (F.R.S.) until his death in 1892. Despite the various controversies, the biologist and paleontologist still had his supporters and was nominated for the Royal Society's governing council in 1862 and 1870. On both occasions, though, the nominations were successfully opposed and he had a number of powerful enemies at the society (including Charles Darwin and Thomas Henry Huxley).

His life-time fellowship was never withdrawn, though, and he remained an active member both politically and academically into his 80s. Note that being denied a place on the council did not mean that Owen was denied membership of the Royal Society itself.

Richard Owen's obituary in the British Medical Journal includes F.R.S. after his name. 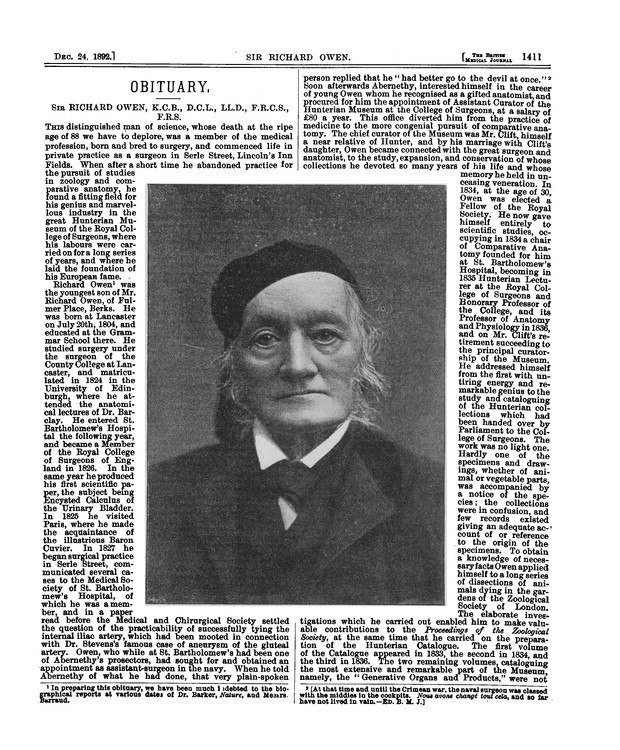 There are also a number of other sources indicating his fellowship continued after 1858, including this Royal Society published document from 1887, the 1873 book Cartoon portraits and biographical sketches of men of the day (which clearly states 'Fellow of the Royal Society'), and this Royal Society archive page for an 1873 Vanity Fair cartoon.

Richard Owen was nominated for election to the Council again in 1862 (the council being the governing body of the Royal Society), but this was successfully (though controversially) opposed by Huxley. Although he remained a powerful figure in the Royal Society after 1858, his nomination by Edward Sabine in 1870 was again opposed. However, Owen continued to present papers to the Royal Society until at least 1887, by which time he was well into his 80s. Issues of Proceedings of the Royal Society of London on the internet archive make many references to his activities at the society over the years.

Concerning the Zoological Society, Owen resigned from the Council when Huxley was elected to it. Unfortunately, the source doesn't give a date so I'm not sure if this is referring to 1846.

Owen was capable of great acts of kindness when it suited him and he maintained a life-long concern for the welfare of the poor of Lancaster, his hometown, which was the reason for his significant (but often overlooked) contribution to sanitary reform. Despite his many justifiable claims to fame in his scientific work, it seemingly wasn't enough for him; he plagiarized colleagues, claimed credit for the discoveries others and was vicious in his attacks on 'opponents'. His treatment of Gideon Mantell was particularly spiteful. Mantell said of Owen that it was

No one fact tells so strongly against Owen...as that he has never reared one pupil or follower.

Not the answer you're looking for? Browse other questions tagged 19th-century science victorian or ask your own question.

11
What were the Government Press Prosecutions of 1858 and why did they occur?
17
What is the equivalent in France of the "Victorian era"?
2
English society in the early 19th century: Was aristocracy including royal members?
11
What was the relative social status of a "grazier" in Victorian England?
23
What was life like for an adult Victorian chimney sweep?
37
Why did the Royal Society in 1771 believe that a continent further south than Australia should exist?
5
What was the rate of premarital conceptions in England from 1850 to 1890?
11
What (else) happened July 1st 1858 in London?
1
What was life like for Australian convicts in the last few decades of transportation?
5
What is this Victorian era British Uniform? Royal Horse Artillery?