Is the Western Wall the only remaining portion of the Second Temple?

I saw a travel blog post recently that claimed that the Western Wall is the only remaining portion of the Second Temple in Jerusalem. At first, I thought this was just a mistake on the part of the blog post's author, but then I found that several other sources (including the Encyclopedia Britannica) say the same thing, though I couldn't find any that cited an academic source and/or explained their reasoning for making that claim.

So, my question is, is there some reasonable interpretation of the claim that the Western Wall is the only remaining portion of the Second Temple that is consistent with current archaeological and historical evidence? And, if so, what precisely is that construction of the claim?

Note that "Herodian-era" in this question means built in the time of Herod the Great, during his expansion of the Temple Mount in the first century BC, which was toward the end of the Second Temple period.

Some sub-questions that would need to be answered to answer that this question:

For those who may not be as familiar with the present appearance of the site, this is a relatively-recent aerial photo from Wikipedia. The photo is facing the Southern Wall. The Western Wall is on the left; the Eastern Wall is on the right. The whole area inside the walls is what is known as the Temple Mount. 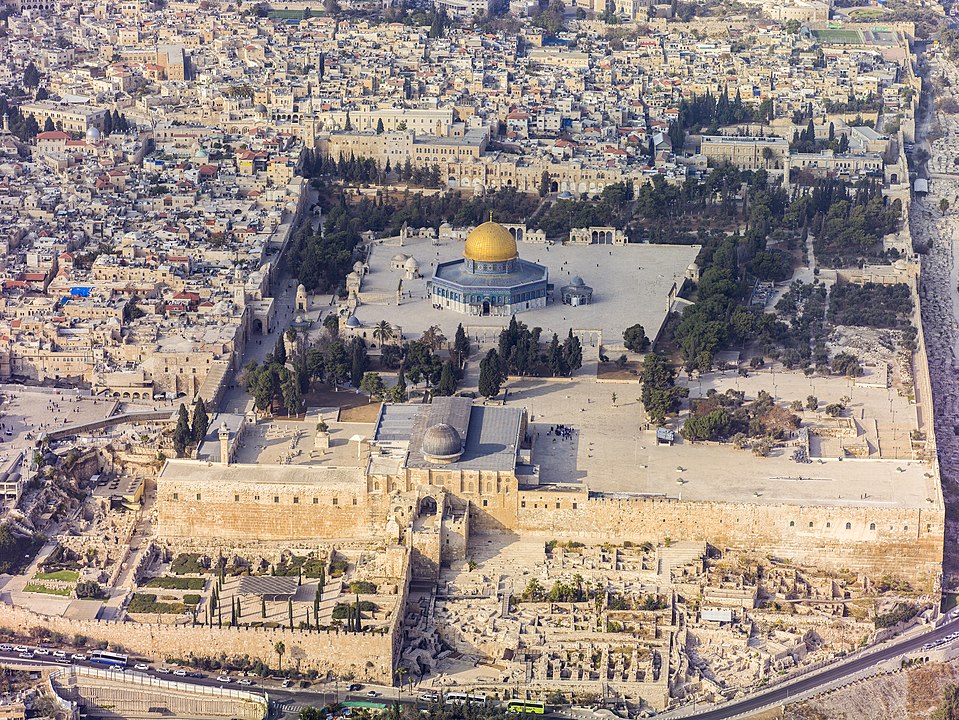 By the way, I'm primarily interested in what is supported by archaeological and/or historical evidence, though if the claim were based primarily on some religious tradition, that would be interesting to know, too.

Given that my question is mostly about the history of the temple complex in Jerusalem, I figured that the History Stack Exchange would probably be a better fit than, say, Skeptics or Mi Yodeya, but please let me know if you think this doesn't belong here for some reason.

It's probably more correct to call it part of the Temple complex rather than of the Temple per se, but that's really a matter of definition. The Temple Mount, of which the Western Wall is one of the retaining walls,* is the outermost zone from which, according to Jewish law, certain impure people are excluded; on the other hand, for example, sacrifices can't be offered throughout the Temple Mount, only in a zone within that, called the Courtyard (azarah).

* There is a responsum by Rabbi David ibn Zimra (a prominent 16th-century authority on Jewish law) that appears to identify it as the wall of the Courtyard. However, the consensus of later authorities is that it's the wall of the Temple Mount.

Not the answer you're looking for? Browse other questions tagged religion religious-history judaism jerusalem temples or ask your own question.

42
Why were there no religious wars in Poland?
7
What is the role of towers in Romanesque architecture?
6
Was Buddhism the dominant religion of India for 1 thousand years?
2
Was the wall of the Second Temple part of the fortification of Jerusalem?
5
On the history of Jewish places of worship
7
Which fortress east of Ancient Megiddo did Thutmose III go to during the siege?
21
Is today's Old City of Jerusalem the Jerusalem of the Crusades' period?
12
Was Yahweh a god in a possible Edomite Pantheon?