When did "&" stop being taught alongside the alphabet?

After reading “A Was an Apple Pie” Lyrics, which ends with

"W wanted it,
X, Y, Z and ampersand
All wished for a piece in hand."

I came across more detailed information on the website Fast Company, but that same information is repeated on many other websites. The story of the symbol is pretty clear and it is easy to follow. However, I'd like to know when the '&' stopped being taught alongside the alphabet.

I have come across a few comments referring someone's parents or grandparents being taught the alphabet with the ampersand until as late as the 1920s but I have no idea if such comments pertain to the US or the UK nor if the practice continued until later.

Ironically, it seems to coincide with the addition of the very word 'ampersand' to the dictionaries. But the process took a while to complete and a precise date seems to be undeterminable, not in the least because it wasn't universally adopted ever. The character got its corrupted name around 1837 and from then on lost popularity so much that by the late 1800s it was already distant memory for most.

A real watershed for its use in alphabet learning early readers' books seems to be 1857:

Even as late as 1857, & was printed in some early-reader books as the 27th letter of the alphabet. And it is the ampersand’s status as a letter that gave it the name by which we know it today, a name that first appeared in English in about 1835.
–– Stephen Webb: "Clash of Symbols. A Ride Through the Riches of Glyphs", Springer: Cham, 2018.

If that is indeed 'the year', then the ampersand as twenty-seventh letter of the alphabet appeared in 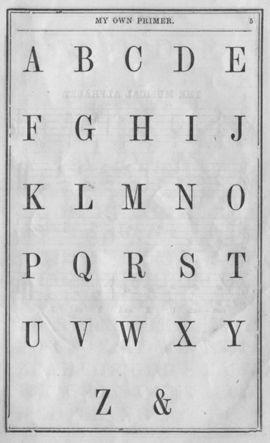 During the whole time various editions of for example John Walker: "A Critical Pronouncing Dictionary, and Expositor of the English Language ...: To which are Prefixed, Principles of English Pronunciation ... : the Whole Interspersed with Observations, Etymological, Critical, and Grammatical… ", Tomas Tegg, 1827( checked until 1882) contained discussions about whether the English alphabet contains 24 or 26 letters 'properly', but has the 'per se et' listed as additional info outside of the alphabet (example) 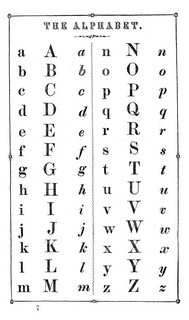 Not really implausible speculations and reasoning around that to be found at How and why has the ampersand been removed from the alphabet?

When Old English was discarded in favor of the modern English were are now familiar with, the ampersand maintained its status of “member of the alphabet” (to coin a phrase) to a degree, with some regions and dialects opting to include it until the mid-1800s.

Except that it was not yet called an ampersand. The & sign was, rather, referred to simply as “and” — which made reciting the alphabet awkward. As Dictionary.com notes, it was (and is) odd to say “X Y Z and.” So, they didn’t. Instead, our lexicon developed another saying: “X, Y, and Z, and by itself, ‘and'” — but instead of saying “by itself,” the Latin phrase per se came into favor. The result? “And per se, and,” or, muttered quickly by a disinterested student, “ampersand.”

Why the inclusion of the ampersand in the alphabet fell out of use is anyone’s guess, but there is a good chance that credit goes to the ABC song we are most all familiar with — that is, the one which shares its tune with Twinkle, Twinkle, Little Star (and borrows from Mozart’s Ah vous dirai-je, Maman). That song was copyrighted in 1835, around the time that the ampersand started falling out of favor with the rest of the ABCs.
–– "And, the 27th Letter of the Alphabet", NowIKnow, 2011.

It all begins with the Little Folks learning their ABCs. In the 1830s the alphabet started incorporating the symbol “&” as the 27th letter. From the Dixie Primer for the Little Folks:

1837, contraction of and per se and, meaning "(the character) '&' by itself is 'and' " (a hybrid phrase, partly in Latin, partly in English). An earlier form of it was colloquial ampassy (1706). The distinction is to avoid confusion with & in such formations as &c., a once common way of writing etc. (the et in et cetera is Latin for "and"). The letters a, I, and o also formerly (15c.-16c.) were written a per se, etc., especially when standing alone as words.

In old schoolbooks the ampersand was printed at the end of the alphabet and thus by 1880s the word ampersand had acquired a slang sense of "posterior, rear end, hindquarters."

During the 19th century it then fell out of favour.

The name ampezant, occurring above in the same passage with ableselfa, is not the only evidence for a final t instead of the usual d of ampersand. Professor Joynes writes:

"As to ampersand, my recollection is quite distinct. In my day fifty years ago the sign & always stood at the end of the alphabet, and we recited it as a letter : x, y, z, ampersand. Yet I think we called it rather ampersant or ampersants, without the slightest idea (on the part of pupils or teacher) that it contained any trace of the word and. I was in childhood also familiar with the name izzard"

Mr. George H. Browne of Cambridge informs me that he used to hear his grandfather (a native and resident of Framingham, Mass.) say the alphabet ending in zed, ampsam. Mr. Browne is not quite sure, at this distance of time, what the vowel of the second syllable was; that of the first was œ. Still another form is eppershand, given in Samuel Ramsey's The English Language and English Grammar, New York, 1892, p. T04, 1 and well explained as et-per-se-and.
–– Harvard studies and notes in philology and literature, Vol 2, by Harvard University; Harvard University. Division of Modern Languages, 1893. (archive.org)

With isolated holdouts persisting into the 20th century, the official statement on this seems to be:

Corruption of ‘and per se—and’, the old way of spelling and naming the character &; i.e. ‘& by itself = and;’ found in various forms in almost all the dialect Glossaries. See A per se n., I per se, O per se, etc.

Not the answer you're looking for? Browse other questions tagged language education or ask your own question.

29
When did the Hebrews stop speaking Hebrew and start speaking Aramaic?
7
What psychology would have been taught at the 19th century Lyceum?
16
Why was not Greek alphabet adopted by other languages given the Greek influence?
49
When did the Greeks stop calling themselves "Roman"?
6
What determined the order of letters in the alphabet
8
When did English become a major subject in Japanese schools?
9
When did "skipping" grades become common and when did it stop in USA?
1
Was Deicide officially taught in American Catholic ("parochial") schools and if so, when did it officially end?