Did some chemical weapons from the military end up in private hands after WWI?

It is a common, well-documented knowledge, that chemical weapons were widely used during the Great War. It is also quite common knowledge, that soldiers like to take "souvenirs" from the battlefield - small trinkets, valuables, enemy skulls... and the captured/favourite weapons. So it is easy to imagine, that there would be soldiers thinking "Hmm, maybe I can take a few of those special shells and use them to get rid of rats in daddy's warehouse". Or maybe a civilian could find few unexploded shells after the war and try to use it for something? The fact is, a LOT of military equipment goes missing and it's later found in unexpected places.

Were there any instances, where a military grade chemical weapons ended up in private hands after the WWI?

From a conceptual viewpoint it's one thing to speculate.

Simple chlorine's usefulness in canisters is entirely different from yellow cross in grenades; or other types. Some could be used as pesticides, others would just pollute 'the barn' so much to be utterly impractical. And disarming the cap means there was practically zero knowledge for that 'idea' in say agriculture or urban pest management. But start to think less 'souvenir' but 'political activist' and even the craziest chemical might attract a crazy crackpot?

That said, some of the chemical weapons were after the war not overseen destructed by allied military but from 1918–1920 partially 'set aside' by German military and private companies, officially to be 'delaborated'.

Apart from these clandestine operations it does indeed happen to this day that dumped into the sea chemicals leak and get washed up on the shores in the form of toxic lumps. Unidentifiable for the casual tourist.

But sometimes the souvenir aspect takes over in people visiting the battlefields. Taking a grenade from an abandoned trench storage maybe somewhart 'safe'. But people still take fired but unexploded shells home today:

A farmer had called to say he had left a shell on the roadside, beside a metal pole with a yellow tip, but it is not there. ‘It seems that someone has taken it for a souvenir. There’s no other explanation. It happens,’ he says. ‘People take these things away without knowing what they are. The explosive danger is little, but the toxic danger is great.’ His colleague Geert Denolf adds that unscrupulous locals sometimes take shells from the roadside, clean them up and sell them to unsuspecting tourists in the markets of Ypres. ‘It will be a booming business during the centenary years,’ he predicts. ‘Booming’ in more senses than one, perhaps.
–– Martin Fletcher: "Lethal relics from WW1 are still emerging", Telegraph, 12 Jul 2013

And not only in France and Belgium were some hidden treasures lurking below ground. On the grounds of American University in Maryland's Spring Valley a private company dug up

a sewer line in front of a recently constructed house in a luxury development uncovered a cache of rusting munitions, including four unexploded mortar rounds and three 75-millimeter artillery shells. […] determined that the mortar rounds still had fuses in them-that they were "live" and extremely dangerous. Some of the munitions were also believed to contain mustard agent…
–– Jonathan B. Tucker (2001) Chemical Weapons: Buried in the Backyard, Bulletin of the Atomic Scientists, 57:5, 51-56, DOI: 10.1080/00963402.2001.11460494

And of course there was more where that came from. Much more. During the war they simulated Verdun battleground, killed a lot of goats with poison gas shells and explosives and after the war just filled up the simulated trenches without proper cleanup. When suspicions about this site formerly called Death Valley resurfaced in 1986 the army simply declared the area safe – just to the University, not the public – as there had been orders to remove the poison…

Now transfer this outcome from a very orderly environment in the US and apply that to the trenches system from Switzerland to the North Sea. It is still such an issue that Eurostar train line issued warnings to passengers that collecting grenades is forbidden and especially prohibited is taking them onboard the trains.

According to 2010 numbers 60 metric tons of duds are cleared annually from the Verdun battlefield by demineurs now.

Q Were there any instances where a military grade chemical weapons ended up in private hands after the WWI?

Quite a lot. One instance would be this: 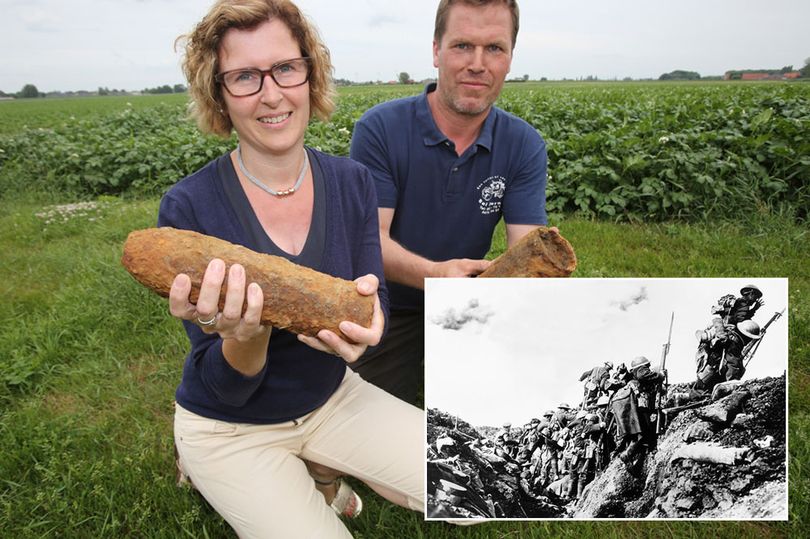 Former battlefields in North-Eastern France and Belgium still turn up live ammunition today, including some with chemical ordnance. And as hinted at in the comments, thousands of tons of unexploded ordnance got dumped in the North Sea. So in a sense, yes, such shells do end up in private hands on occasion - if only momentarily.

That said, I've never heard of a story of someone crazy enough to bring a live mustard gas shell home.

Not the answer you're looking for? Browse other questions tagged world-war-one weapons chemicals or ask your own question.

13
Did Roman military require uniform weapons?
4
Why does the UK buy some of its major military hardware from the USA while France is self-reliant?
6
Is it true that Serbia was offered "Great Serbia" instead of Yugoslavia at the end of the WWI by Allies?
1
What's the story behind this photo from WWI?
28
Why were the Irish exempt from conscription during WWI?
6
Why didn't the WWI Allies attack through the Vosges Mountains after 1915?
16
Why didn't the steppe bow spread further?
2
Did French troops use chemical weapons during the Siege of Laghouat in 1852?
0
Which kingdoms were using WWI weapons at the time of the second world war?