How does a heraldic eagle become a nazi symbol?

The Heraldic Eagle, or Reichsadler is still to this day used as the coat of arms of the German empire. Its use in the coat of arms, and on German symbolism generally picture an eagle with curved wings and a red open beak. 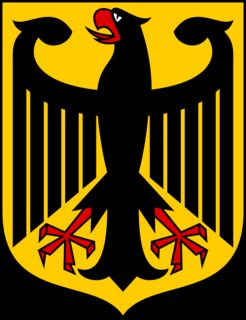 Nazis used a heraldic eagle with wider and straighter wings, and no apparent colors.

In October 2018, a Philly cop was noticed wearing the said eagle on his forearm, and was frowned upon by the national press. However, no apparent sign appeared to me to link this type of symbolism directly to nazism (especially since it wasn't known if the eagle was carrying any swastika).

Simply by using (or abusing) it. An heraldic eagle (or any other heraldic symbol) on its own is neutral. Remember the 3 powers of advertising: repeat, repeat and repeat.

I live in Thailand were the swastika has a very different (and religious) meaning. I've seen a Buddhist temple with a fence decorated with swastika's. To me it's somewhat eerily funny, but I am not a Buddhist. For Buddhists there's nothing wrong with that fence. Likewise I had to ask a pupil not to wear a very fashionable red shirt with a huge white circle and a swastika in class. For the pupil, it was just a fashion statement. He hardly knew what Nazis were or what they have done. (History has a very low priority here.)

In a similar vein the Dutch flag is a red-white-blue tricolor. We used to have a different version, in the 17th century, which was orange-white-light blue, the Princevlag. During the 1930's the NSB (Dutch quislings) started promoting that old flag. In reply the Dutch government officially described the colors of the flag, being red-white-blue.

The Princevlag, like the heraldic eagle, doesn't not have a specific political meaning. People give it meaning. Right now some groups would like to use the Princevlag, but that has been permanently tainted by the NSB.

However, no apparent sign appeared to me to link this type of symbolism directly to nazism (especially since it wasn't known if the eagle was carrying any swastika).

Well, the eagle as displayed the way the Nazis displayed it, together with the word "Fatherland" in some gothic font certainly makes it a symbol of the Third Reich. Either that, or the guy is a real fan of the book "Fatherland" and chose a really strange way to make his fandom known.

After the fact? Well, Germany tried. With the Reichsadler so prominently displayed on many buildings, it just wasn't feasible to tear them all down or at least substantially damage them, especially not after the war when non-bombed buildings where rare.

"Entnazifizierung" ("denazifying") in this case happened by removing the swastika. The remaining eagle with the hole where the swastika had once been was deemed enough. (Example)

But if somebody would build a new building and put one up, it would certainly raise questions and eyebrows.

Because they used it. Just like the swastika, brown shirts or Hitlers mustache. They are all connected to Nazis because the Nazis used them. The same way as the star spangled banner is American or the yellow M is for McDonalds. It's not an inherent property, it's what we make of it.

Here is an interesting undergraduate thesis that compares the different ways the eagle was appropriated as a national symbol in US and German contexts. In both cases, the author traces this symbol to Roman times (the aquila). Regarding the specific way the Nazi Party (NSDAP) used the eagle (the Parteiadler):

When the partially Germanic Holy Roman Empire came about, they took the Roman eagle as their own in order to link the legacies and lineages so as to justify their claims of authority and identity. Specifically the double-headed Byzantine eagle was adopted (Becker 114), which became the emblem of Germany during the middle ages (Whittick 236), and the bird continued to be the national insignia in either its single or double headed form. Whereas the American eagle was meant to represent virtue, the adler here clearly retains much more of the militaristic significance that the aquila held, for it gazes over its left shoulder, toward the sinister. This seems to suggest, especially when compared to the American eagle, a preference of the adler for war, rather than peace. Additionally the NSDAP changed the iconography to make the eagle sharper, darker, and more intimidating, but also placed in its talons a swastika encircled by a stylized oak wreath. (emphasis added)

I find it almost impossible to believe that Lichterman's tattoo isn't an intentional reference to the Nazi Parteiadler. Even if it lacks the swastika and oak wreath, the other elements I put in bold above are present.

Not the answer you're looking for? Browse other questions tagged nazism heraldry symbols or ask your own question.

14
White on Polish coat of arms
22
Why was the bald eagle chosen as the national bird of the United States?
9
What does this spear & carpentry square symbol mean?
10
How much of Nazi iconography came from Hitler?
16
What does the eighth samurai crest / symbol in this picture signify?
4
What is the symbolism behind the Sauser family crest from Sigriswil, Switzerland?
11
What were the rejected designs for the Euro symbol?
9
Is this costume plate from Theatrum Orbis Terrarum correctly colored?
5
Was Swastika a universally-recognized symbol of fascism as early as 1925?