Can anyone identify these uniforms? 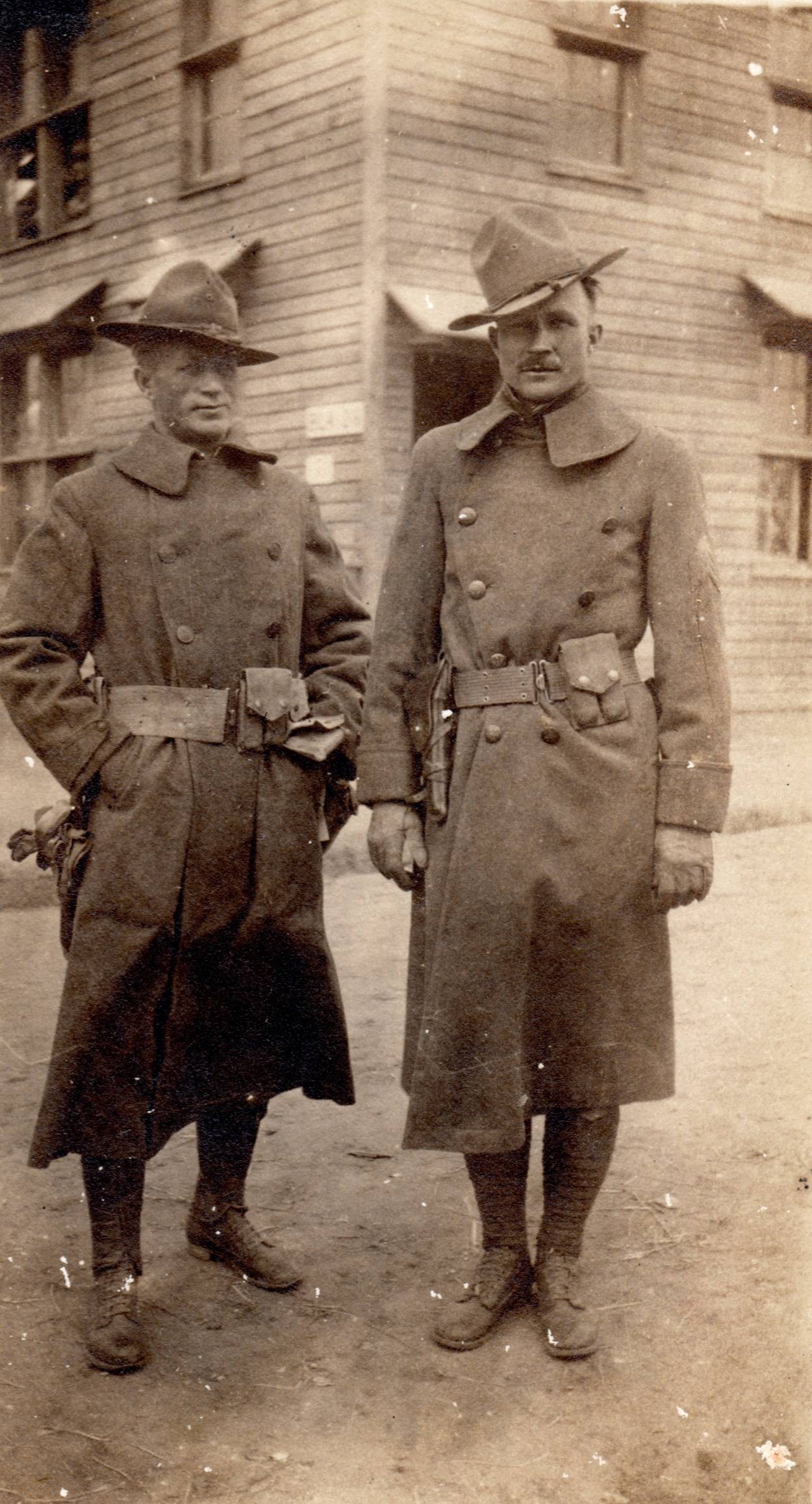 Without knowing the date of the photograph, the context involved, the specifics of what the building is behind the individuals depicted, etc., it is difficult to conclusively state particulars. But much can, however, be identified here, beginning with the apparent age of the photograph. This is a sepia-toned image that likely dates to the 1910s-thru-early 1920s. And in keeping with the older "view"-style cameras of that era, the original print of this photo would have been VERY small, almost UNDER pocket-sized, and this particular image (due to its slight fuzziness) would have been an ENLARGEMENT of same. I have a large collection of family photos that date to the same era, including those of relatives who served in the U.S. Army during this time in history, and this could easily match the color, level of focus and clarity, of those images.

The man on the right of the image (on the left of the two from his perspective as he faced the camera) is wearing U.S. Army Sergeant stripes. We can possibly further confirm that he was indeed a Non-Commissioned Officer (NCO) from the fact that he alone of the two men is wearing a mustache. In that era when these uniforms were common (anywhere from the Punitive Expeditions Against Pancho Villa through the end of World War I) more junior enlisted men would NOT have been allowed to grow mustaches. They were simply too junior to have earned the privilege. [The old adage "Rank has its privileges" most certainly applies here.] Beards were strictly prohibited at this time in Army military history, and contrary to earlier periods in the Army, hair was routinely well-groomed and cut very short around the sides and back of the heads, this being primarily to reduce the incidence of lice and lice-borne diseases that were endemic to military barracks life in earlier years. Bed-bugs and fleas, etc. (better known by Doughboys as "kooties") during that era would have been unavoidable, as dust mites thrived in old mattresses, heavy wool blankets, etc., that would have been used over and over by a multitude of soldiers. But at least the body lice problem would have been lessened as there were fewer places for lice to congregate and breed when men had shorter hair (the sides and back of the head being prime breeding grounds for lice eggs (known as Nits) that needed a warmer environment found in the insulation of longer hair.

Both soldiers have woolen World War I-era U.S. Army uniforms and campaign hats set at jaunty angles (a common practice in informal portraiture from the 1920s-1950s). Both are wearing the heavy woolen great-coat, "lovingly" referred to as the "horse blanket" by the troops themselves, and especially heavy, miserable, and smelly whenever it was drenched by rain. Both are wearing W.W. I-era woolen leg wraps (a.k.a. "puttees") above their boots (again, a control against parasite bites (like Ticks) the soldiers would have been exposed to in ground-level operations.

The junior soldier to the left of the photo (on his own right in the photo when facing the camera) is wearing an older wide cavalry-version web belt from just ahead of that era (stocks of which, as with all U.S. G.I. gear, would have been used until depleted), a heavyweight canvas web affair with a brass clasp buckle, an M1912 drop-style ("dismounted") holster for the M1911 .45 Auto pistol, and a canvas pouch (up front) intended to carry two 7-round magazines of .45 cal. military ball (230 grain) ammunition. He wears no visible rank on his coat (no stripes, no officer's collar brass, and likewise no Eagle, Globe and Anchor on the front of his campaign hat that would have indicated he was a U.S. Marine whose field combat uniforms at this time were nearly identical to those of the Army). Incidentally, he likewise has his hands in his coat pockets, which besides being strictly against most military regulations for formations, etc., also indicates he and the Sergeant were likely friends (since the sergeant hasn't already ordered the junior man to remove his hands from the pockets) and also the obvious factor that the location where this photo was taken was likely very cold.

The Sergeant, who as an NCO had the privilege of obtaining newer or improved equipment, wears the more common later-styled heavy canvas web belt with a square brass clasp. This was a purely World War I improvement, which also helps date the photo. Likewise, he is also carrying the newer M1916 holster (without the longer "drop" extension) for the same M1911 .45 Auto pistol, and the same canvas pouch for two magazines, exactly the same as his junior-ranking friend.

The building behind them has markings on a placard at the corner, but they are not clearly legible as to whether they are marked in English or perhaps Cyrillic text. It appears to be too tall for the typical two-story early-era barracks building used with the U.S. military, as this structure does not bear the distinctive shape and layout of old American G.I. barracks (I've seen, lived, and worked in plenty of them, both of very similar designs from both W.W. I and W.W. II, during my own service years, as well as in archival photos of older barracks dating to 1917 when I was the Chanute AFB historian.)

I'm going to take a wild stab at this, but I am guessing that these fellows might have been U.S. Army troops associated with either half of the "Polar Bear Expedition" into Archangelsk or Siberia in Russia during World War I. Both places were horrifically cold, and under those difficult conditions, I'm sure regulations about troops being allowed to have their hands in their pockets might have been a bit more relaxed than elsewhere in Army service. I would even take a guess that the building behind them might have been a former Russian building (in Vladivostok perhaps?) converted for U.S. Army use (and marked as such while the troops occupied it) during that campaign.

One other odd possibility: scrutinizing the faces of these men, both have very similar features in the shape of the mouth and upper face. Could they possibly be related?