The current minimum height required for the Swiss Guard at the Vatican is 5'8 1/2" or 174 cm (Swiss Guard requirements). Has that always been the case? I remember reading years ago that the minimum height requirement used to be about a foot (30 cm) more than that back when the Guard was formed. However, I have not been able to find anything on this one way or the other in basic information about the Swiss Guard.

[edit] Support for the possibility of a much higher height requirement. The basic argument is that adequate nutrition (and possibly living at altitude) may have provided conditions for height to be taller then.

This is not a definitive answer, because I haven't found a firm source to establish when the height standard came into existence, and because the history of army height requirements is turning out to be surprisingly difficult to google.

With this in mind, I'd stick my neck out and suggest that no, the standard if any was probably different when the regiment first formed, and that there probably wasn't a specific standard back in 1506 beyond being, well, tall.

The first hint is the standard itself: 174cm is oddly specific. The unit didn't exist at the time. If we allow that it might have been expressed in (of all things, British) imperial units for some reason, on the basis that measurements in Rome (or Lausanne) might have matched them, then we must also consider how 174cm and 5'8 1/2" are almost exactly the same. That seems too good to be true. Why pick 5'8 1/2" Why not a rounder 5'8" or 5'9" (both numbers turn up when googling it)? That alone suggest me that the standard, if any, wasn't the same when the unit was first put together under Pope Julius II.

(In passing, we can factor in that a typical British WW1 soldier was short enough that they wouldn't have met the criteria to become a Papal Guard. The average height seems to have been 5'5" at the onset of the war, and a 5'7" soldier was apparently rare. So demanding 5'8 1/2" in 1506, to say nothing about the laundry list of other criteria, isn't setting you up for recruitment success.)

The next hint comes from how the Swiss Guard was initially formed. Pope Julius II, a former Bishop of Lausanne, sent a letter to Swiss cantons, asking them to provide him with 200 soldiers. They only supplied 150 for one reason or another. If we assume that they were cooperative (a sensible assumption I think), this can be interpreted in two ways. It could mean they couldn't find enough soldiers (leading one to assume that any volunteer got to go). It could also mean that there weren't enough soldiers that were fit for the job. Question mark, but hold on to that thought.

The leader of this initial force was Kaspar von Silenen. And his wiki page helpfully raises that:

Under Pope Leo X, Kaspar von Silenen's company was one of six Swiss and Grisons mercenary units, totalling 1,800 men, sent to Rimini in the War of Urbino of 1517. They were supposed to help defend the city against the Duke of Urbino until reinforcements could arrive. They were quartered outside the main city walls, in Borgo San Giuliani, because the garrison commander, condottiere Guido Rangoni, was reluctant to let a large mercenary force enter the city. In the evening of 4 August, there were reports of a large enemy force approaching, and Rangoni invited the mercenaries inside, but Kaspar refused due to the late time of the evening, saying his men were already "full of wine". The enemy arrived in the early morning of 5 August and managed to enter the Borgo unnoticed, and killed many of the mercenaries in their sleep. Kaspar also died in this attack.

It unfortunately doesn't say whether this was the Swiss Guard proper, or some other mercenary troops that happened to be Swiss -- I suspect the latter. Still, I'm finding this anecdote about drunk Papal troops hard to square with the "there weren't enough soldiers that were fit for the job" hypothesis that we just looked into. Given the time period, it might be possible to reconcile the two. But seeing how the Pope was recruiting drunkards only a few years later, I'm more inclined to believe that any reasonably fit and honest young man would have worked for the initial batch, and not enough were rounded up.

The last set of hints I came across are from the following two papers on the history of weight and height standards:

They're mostly about the US army, but the two papers offer a few interesting tidbits. You'll hopefully excuse my not remembering which of the two had which bit. Somewhat conflicting hints include:

Put together, I'm finding the evidence somewhat conflicting. The only way to know for sure would be to access the Vatican's archives, assuming they kept a copy of the letters that Julius II sent to the Swiss Cantons. I haven't located any way to access those online.

If I were to guess, I'd suggest that there likely was some kind of standard (it's their job to stand tall at the end of the day, and using height as a recruitment criteria for soldiers wasn't unheard of), but the criteria was "tall" rather than something as specific as 174cm or 5'8 1/2", or perhaps some round number in whichever unit Rome or Lausanne was using at the time. But as already noted, this is pure speculation.

Edit: Mark Johnson chimed in with a helpful comment.

The Roman foot is not the same as the Imperial one. If we assume that there was some kind of express height before the decimal system got introduced, and that Rome still used Roman units when this express height got set (I haven't verified but would be inclined to think it did), then it's interesting to note that 5 pes 14 digitus (= 5.875 pes) is within a few whiskers of 174cm.

This leaves us with two scenarios:

Assuming the latter scenario, this leaves open the questions of when the height requirement was introduced exactly (was it by Julius II or someone else?) and if it changed over time.

The first edition of the question was, ( you can roll it back by pushing the "edited" button and can find the original ) and I am answering basing on the question.

I found an almost direct ( but inferred by indirect method ) answer to this question at a Japanese blog site ( who has been living in Switzerland for almost 15 years marring with an English husband ).**

I would like to translate some important lines by the lady

I've been here in Switzerland for 15 years. I've been living near the Lake Zuerich with my English husband. I would like to post many issues such as the reality of Swiss that I had not expected, living abroad for a long time, the international marriage, the beauty of Switzerland and people's life, seasonal life, so on from a city near the lake with many photos.

The armor of Swiss Guards', who are protecting Vatican, was renewed after 500 years ( and the news is it will be made in Austria )

I've been on the European tour for a while now.

It is a well known fact that mercenaries from Swiss have been protecting the Pope for over centuries, but the news is, the armors of the Swiss Guards will be replaced by new ones after historical 500 years.

I think the translation up til here is enough.

So a report from a lady who has been in Switzerland says the armors were replaced by new ones. The OP's original post was I think if the physical requirement of Swiss Guards had been 6'8 in the past ( if I remember correctly )

The height of NBA star Lebron James is 6.8. My height is 5.7, which is exactly same with that of the (potentially hypothetical) requirement for Swiss Guard. If the height requirement for Swiss Guards had been different, it would be same with that Lebron James is trying to wear the same uniform of me, which would not be possible. (too short for him)

Had there been any chance that the physical requirement had happened to be 6.8 in the past, the armors for the guards should've been in completely different size, **therefore, the fact that the size armors for Swiss Guards were changed after 500 years indicates the physical requirement has been same throughout its history almost for 500 years, which means it has been 5,7 (probably roughly around) for centuries ** 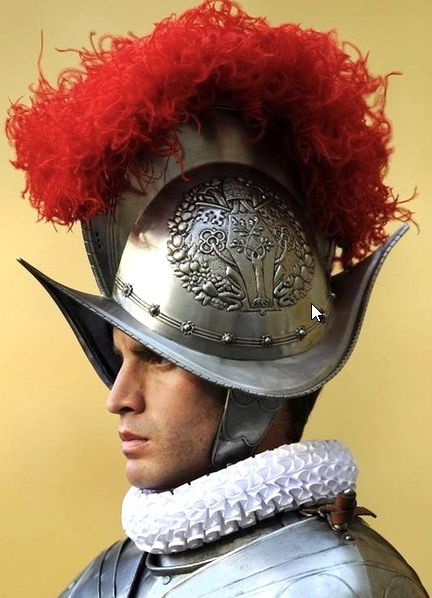 Above is the old armor worn in the past.

Not the answer you're looking for? Browse other questions tagged military middle-ages switzerland or ask your own question.

33
Why did Meiji government consider switching from Japanese to English?

5
What did the end of the western front look like at the Swiss Border?
7
When the term “president” was used the first time?
2
When was encrypted voice over radio first used?
101
Why did archery not make a comeback when armor was phased out in the 18th century?
6
When was the first airborne combat drop?
3
Name of Kingdom that was formed after marriage refusal?
3
Did Italian irredentists ever lay claim to the Swiss Canton of Tessin?
2
What happened to the Swiss troops in French service after August 10, 1792?
2
Are the Swiss flag and the flag/coat of arms of Piedmont related?