Why did the later Crusades seemingly focus more on naval traversal?

I was studying some general Crusade maps and I noticed the first crusades seemed to be more land based as compared to the latter ones and I was wondering exactly why that was (besides just changing their target to Egypt and other locales in the late crusades).

I know the status of Constantinople fluctuated making it a challenge to get to the Tripoli/Acre, but from my understanding Greece was still relatively 'safe' land for the Crusaders, so why would they not traverse and depart from there?

Was it simply because the English built ships to cross to Europe so they figured might as well sail around it? I would have thought the Islamic occupation of Spain/N. Africa would have made that even hassle that it's worth.

I'm pretty ignorant on Crusader history, so thanks for any insight. 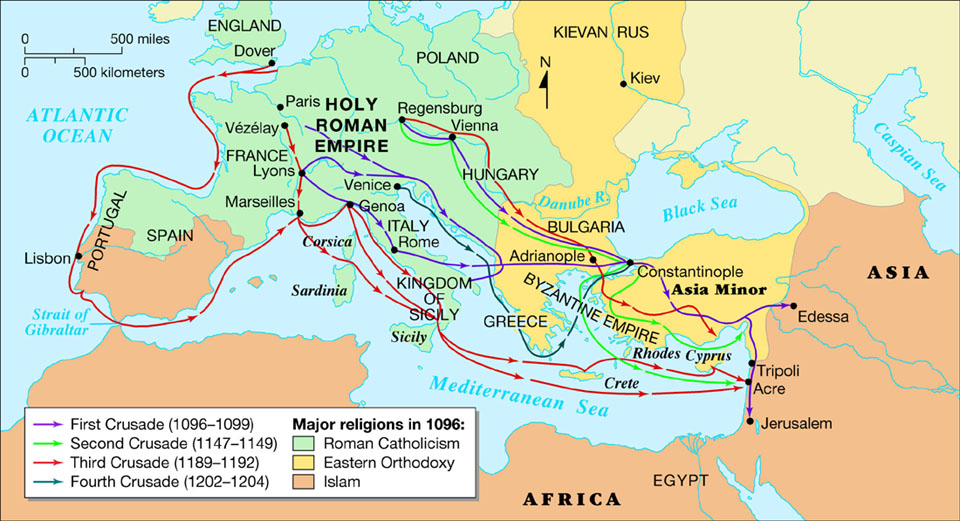 Politics, collaboration and trust dictated the routes of the armies to the Holy Land during the crusades.

Each crusade is different from the others, with different participants, different nations, different objectives, different interests, different periods and different geopolitical situations. The routes to reach the holy land were studied carefully and many leaders choose the path best suited to their political and strategical needs.

Naval routes to the Holy Land may have been more viable after the third crusade when the crusaders acquired a more powerful naval force by incorporating the vessels from the kingdom of Sicily and Cyprus and inflicted multiple losses on the Muslim naval force as stated in this document The Rise of Latin Christian Naval Power in the Third Crusade that covers the naval choice of the third crusade and gives a detailed look on the overall naval power of Christianity during that period. Most important the writer concludes saying

The main legacy of the Third Crusade on the Latin side (besides added territory) was the acceptance of using sea power primarily for further military actions in the Levant.

Indeed, it was not long before the Latins flexed their newfound naval muscles in the Mediterranean again, this time turning it on the Byzantines in what became the Fourth Crusade. Constantinople proved no match for the powerful Latin fleet.

It was also no accident that the Fifth Crusade led by King Louis IX in the next century followed up on Richard’s and the Templars’ plan to attack Damietta in Egypt with a fleet rather than assault Jerusalem. Emperor Frederick II was able to leverage naval strength in the Sixth Crusade to achieve what even Richard could not: the surrender of Jerusalem (albeit by negotiation).

The Byzantines, once a considerable power on the seas, were already in retreat from the Sicilians by the Third Crusade and after the Fourth, they were a naval non-entity.

Lastly, on the Muslim side, naval power fell into a long decline after the death of Saladin in 1193. This serious lack of attention to marine affairs only facilitated the aforementioned Latin ascent. It would not be until the rise of Ottoman fleets in the latter half of the fifteenth century that Muslim sea power would return to challenge the Christian nations of Western Europe for supremacy on the Mediterranean.

In regards to the crusades you mentioned, these are the motivation for the route chosen:

In this crusade none of the leaders of the various armies was a ruler, but they were all members of the high nobility. Each of the leaders arrived independently (by land, by sea or both) in Constantinople, as the crusade was called by Pope Urban II to help the Byzantine Empire regain their lost territories. Despite the success of the crusade the reputation of the crusaders was very low mainly due to:

Alexios (The Byzantine Emperor) requested the leaders to swear fealty to him and promise to return to the Byzantine Empire any land recovered from the Turks. Godfrey was the first to take the oath, and almost all the other leaders followed him... - wikipedia

The Norman decided to renege on his vow to return all captured territory to the Emperor and kept the city for himself. The relations were thus irrevocably soured between the two leaders. - Ancient History Encyclopedia

.. rape and pillage perpetrated by the less pious members of the western armies which were causing chaos as they crossed Europe and the Empire’s territory. - Ancient History Encyclopedia

Below you find a map taken from wikipedia that illustrates all the routes taken by the various leaders to reach Constantinople. 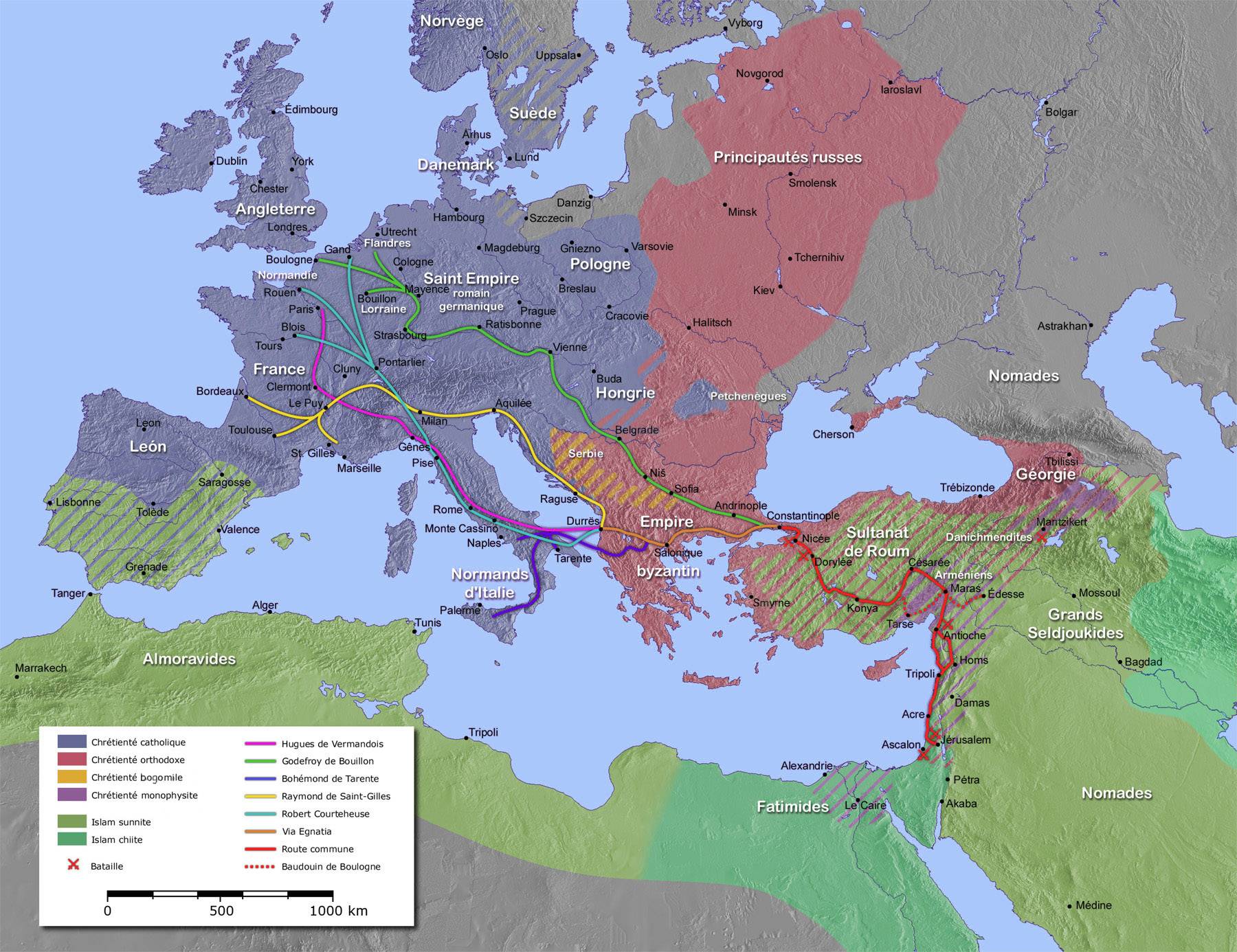 This was the first crusade leaded by kings. Conrad III of Germany decided to travel by land as they considered the sea route as politically impractical because Roger II of Sicily was an enemy of Conrad. Many of the French nobles were against the land route, which would take them through the Byzantine Empire who distrusted the crusaders who had gained a reputation for theft and treachery since the First Crusade. They took the land route anyway and diplomatically increased the relations with Constantinople who was in a delicate position at the times, with a German army in their territories pillaging, looting, and raping, the Turks pressing on the borders and the Kingdom of Sicily invading the Peloponnese. In the end Manuel I Komnenos (Byzantine Emperor) signed a truce with the Turks (seen by him as less of a threat than the Crusaders in the short term) that angered the French who wanted to storm Constantinople in retaliation. 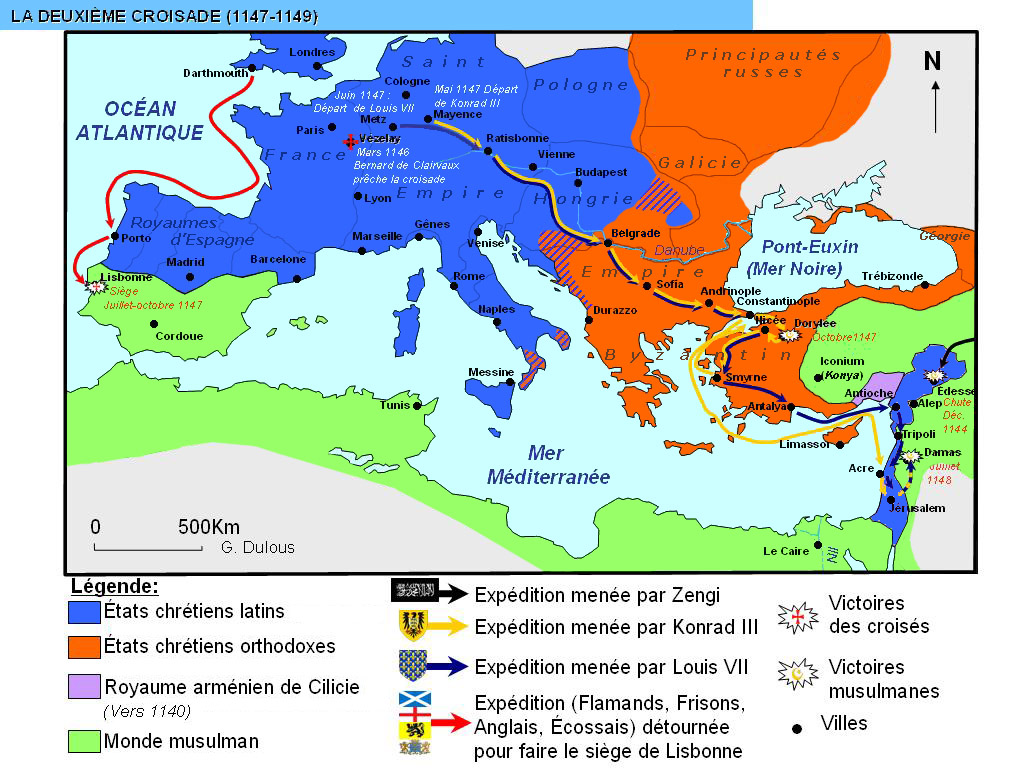 During the third crusade the memory of the ambiguous behavior of Manuel I Komnenos Byzantine emperor during the second crusade, placed some European leaders in the condition of not being able to trust Constantinople. Holy Roman Emperor Frederick I Barbarossa tried a land route but was delayed for six months in Thrace as the Byzantines refused to let them cross. Richard the Lionheart and King Philip II of France departed by sea to reach directly the Holy Land, pursuing personal interest on the way such as the occupation of Sicily and the conquest of Cyprus, totally unrelated to the crusade's fights. 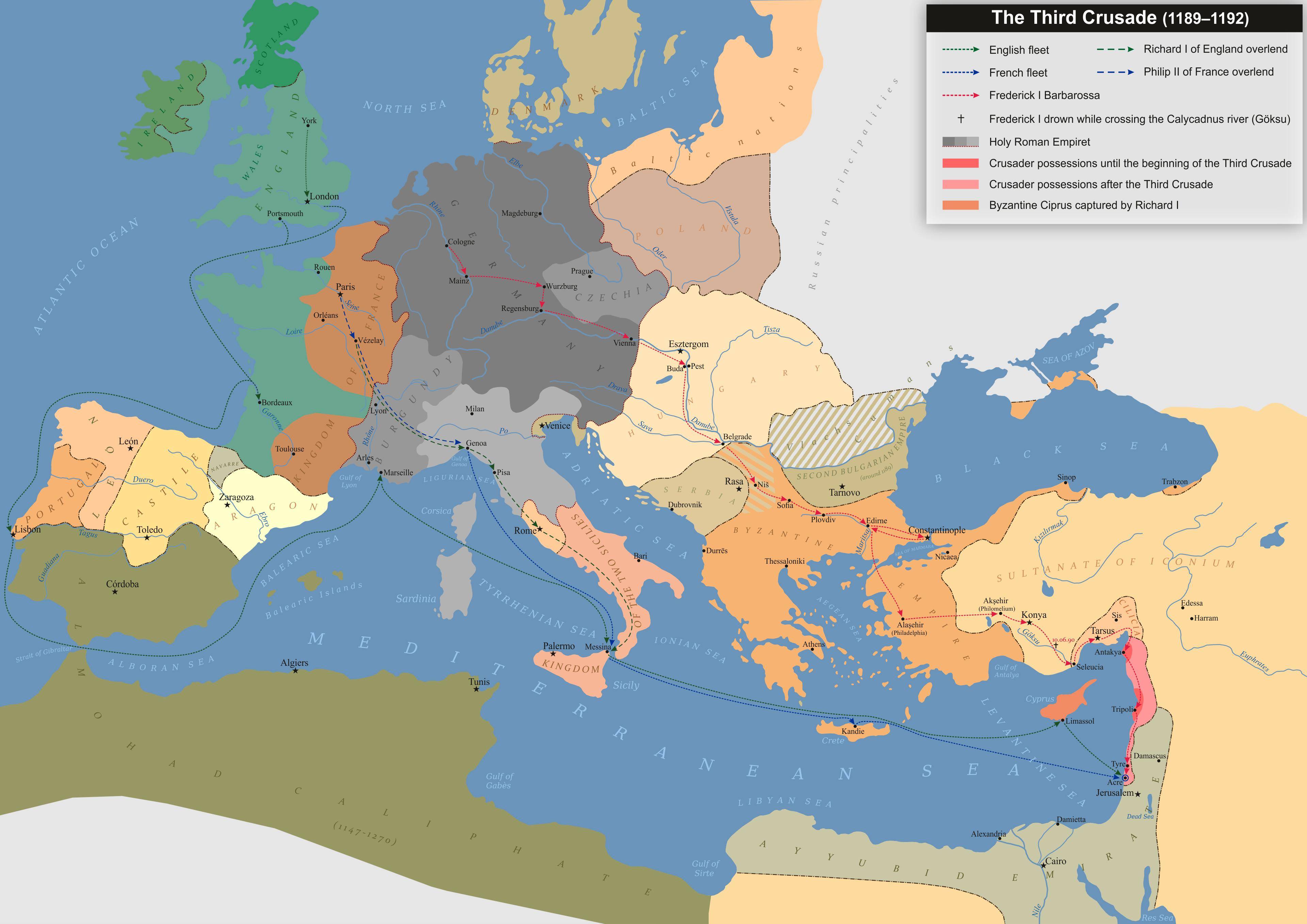 This crusade, as correctly guessed in the question, used only naval route because the objective of the crusade changed to Egypt. The stated intent of the expedition was to recapture the Muslim-controlled city of Jerusalem, by first conquering the powerful Egyptian Ayyubid Sultanate, the strongest Muslim state of the time. This led the crusaders into an agreement with the Venetians that provided the bulk of the fleet for the traversal, ultimately resulting in the Siege and capture of Zara (a Catholic city) as a form of payment for such fleet. The crusade soon escalated in an all out assault on the Byzantine Empire, fueled by the ambition of Venice and the need for resources by the crusaders.

Not the answer you're looking for? Browse other questions tagged war travel crusades or ask your own question.

6
When and why did Erasmus ask whether the Pope would govern the east better than the Turk?
29
Why did the Soviet Union close its borders and restrict travel abroad?
0
Why did Britain place naval mines in their own Channel in WW2?
19
Why do land mines seem to be a more serious problem in the Balkans than the Alps?
32
Did Muslim states hire Western European knights as mercenaries before the Crusades?