What was China's claim line in the Aksai Chin before the 1962 war?

The original mutually agreeable boundary seems to have been the McCartney-MacDonald line since the late 1890s. In the 1910s and 1920s China seems to have accepted even the Johnson line, by publishing maps that showed the Johnson line as its boundary. However, even after they changed that position after 1950, they still seemingly accepted the McCartney-MacDonald line till 1959. However, just before 1962 war, the line separating the two armies had further moved inward into India.

I understand how sensitive this issue is, and would like an unemotional answer on why there was a shift in the border to the detriment of India, when China ostensibly accepted the McCartney-MacDonald line. Is it because India started sending patrols all the way till Haji Langar, and declined to redraw the line on anything less than the Johnson line? Or was there a need felt to make up for the loss of Chinese territory after the Shimla agreement, which the Chinese felt took away their territory in the East? And this is not even getting into the Tibetan issue.

I searched far and wide and was unable to find a single article, even official historiography, that addressed this point. There are a lot of maps published in the 1950s by China, but there is a big disconnect between what the maps show, and what the Chinese leaders were saying publicly, and also in what the Chinese leaders were saying about the published maps themselves. Also what is the basis of the Chinese claim line of 1960, which they reached in 1962? Is it geographical continuity? 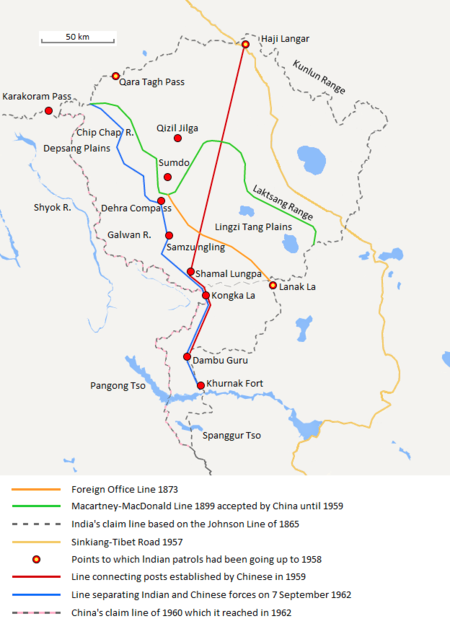 Browse other questions tagged war india china or ask your own question.

22
What was the first known war in history?
9
What laws of war existed before the modern international treaties and conventions?
5
What evidence supports the claim that Shivaji's father was Muslim?
4
Was the Taiping Rebellion the deadliest war of the 19th Century?
27
What was the cleanest war ever fought?
6
What were China's thoughts on the possibility of a nuclear exchange, during the Cold War?
8
Why didn't Pakistan try to wrest Kashmir from India in 1962 but tried to do so in 1965?