How much damage did Farragut do to Confederate supplies in spring/summer 1863?

In March 1863 Farragut ran the batteries at Port Hudson and began disrupting Confederate operations between Vicksburg and Port Hudson.

Shelby Foote seems to suggest that it was this operation that really cut off western food supplies. And that Grant's eventual capture of Vicksburg is what opened the “father of waters” to Union shipping.

So how effective were Farragut’s operations prior to the fall of Vicksburg? Did it make Grant's siege easier? Did it effect the rest of the Confederacy?

By closing off the Red River, Admiral Farragut cut the Confederates' main supply line. However, with only two ships getting past the batteries at Port Hudson, he was unable to completely cut off supplies but the damage to the Confederate cause was nonetheless significant.

At Port Hudson, three of Farragut’s vessels were crippled by Rebel fire, but two went on upriver. On March 19, Farragut’s Hartford and the Albatross ran easily by Confederate batteries at Grand Gulf, steaming on to Vicksburg to attack the Warrenton batteries on the twenty-third. Farragut managed to get past Grand Gulf on the thirty-first and safely back downriver. There his vessels effectively prevented Confederates from using the Red to transport supplies and the Mississippi to transport troops between Vicksburg, Grand Gulf, and Port Hudson. 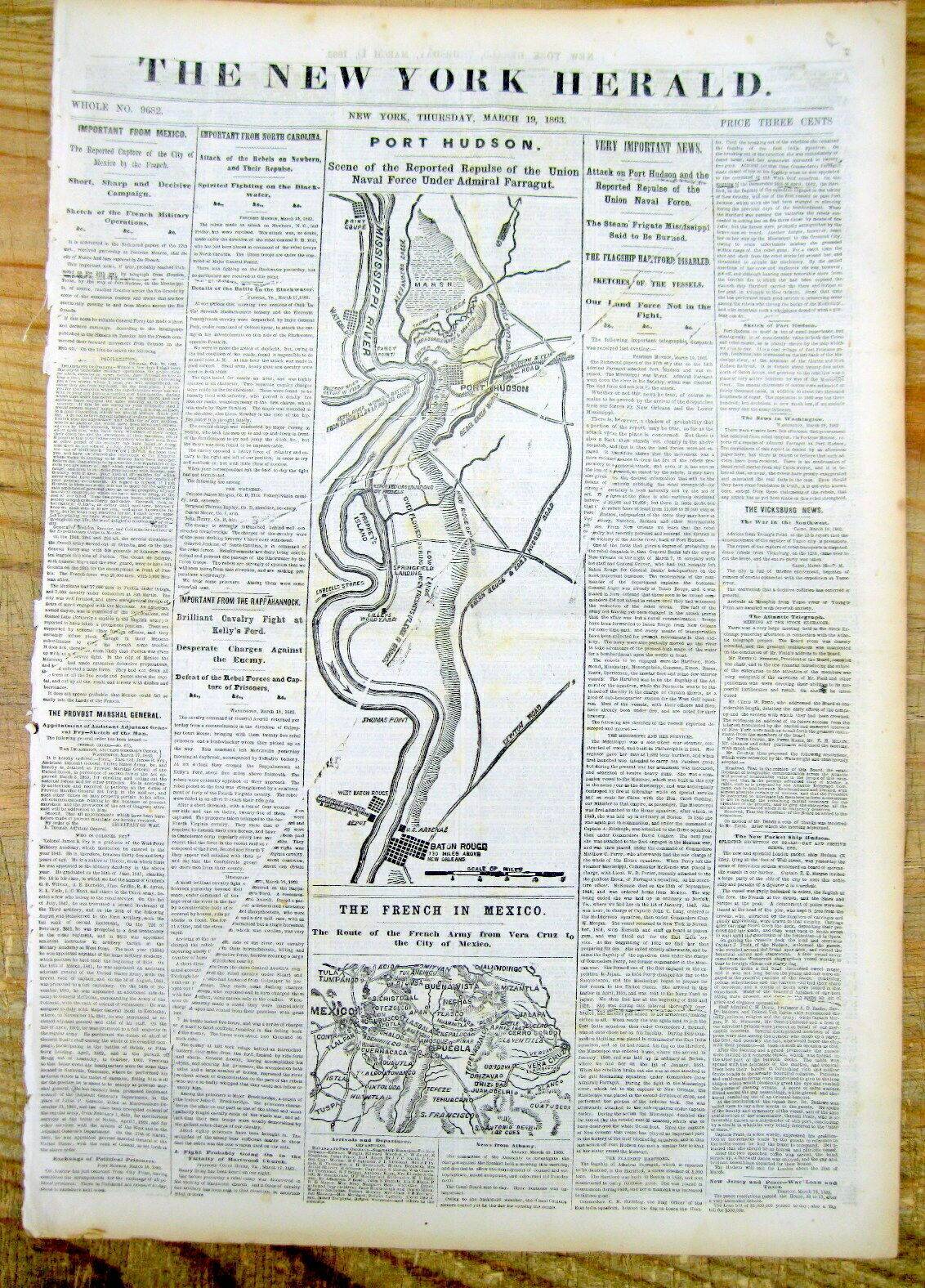 This report in the New York Herald of March 19 wrongly reported that the Hartford was disabled. It's headline 'Scene of the Reported Repulse of the Union Naval Force Under Admiral Farragut' is also a little off the mark. Source: ebay

You are doubtless aware of Genl Pemberton's position and of the presence of the enemy's fleet between Vicksburg and Port Hudson and therefore cannot look until there is a change of circumstances for anything from the east side of the River. The guns /& ammunition/ which have been sent out for you cannot now be transported...

A. T. Mahan's Admiral Farragut, although dating from 1892, provides a detailed account of Farragut's actions. He points out the limitations of Farragut having only two ships:

...it must be admitted that the failure to pass the batteries, by nearly three fourths of the force which the admiral had thought necessary to take with him, constituted a very serious check to the operations he had projected. From Port Hudson to Vicksburg is over two hundred miles; and while the two ships he still had were sufficient to blockade the mouth of the Red River—the chief line by which supplies reached the enemy — they could not maintain over the entire district the watchfulness necessary wholly to intercept communication between the two shores.

Thus, Farragut decided to focus on maintaining a blockade of the Red River as this was the most effective way to disrupt Confederate supplies. He could not, though, separate his ships as the Albatross was not of

sufficient force to be left by herself at the mouth of the Red River. Farragut therefore moved slowly up the Mississippi, destroying a quantity of stores accumulated upon the levees awaiting transportation, as well as a number of flat−boats; and on the afternoon of the 19th of March he anchored twelve miles below Vicksburg The following day he moved further up and communicated with General Grant, informing him of the events that had just befallen him and offering any assistance in the power of the two ships. If not needed, he purposed returning to Red River...

Farragut's other problem was the need for his ships to be supplied with coal; every time he needed coal, he would have to abandon the blockade of the Red River.

Grant accordingly undertook to send down coal, which was done by turning adrift in the current of the Mississippi a barge carrying some four hundred tons. This floated by night clear of the enemy's positions, and was picked up by boats from the Hartford.

Grant was certainly appreciative of the need to control the river, saying

“I look upon it as of vast importance,” wrote General Grant, “that we should hold the river securely between Vicksburg and Port Hudson”

The coal supplied by Grant allowed Farragut to remain in the vicinty of of the mouth of the Red River from April 2nd. Meanwhile, Admiral Porter got past the batteries at Vicksburg for the loss of only one ship on April 16th. On May 1st, two gunboats joined the Harford and then

Three days later Admiral Porter arrived with several of his fleet and communicated with Farragut. The next day, May 5th, Porter went up the Red River and pushed rapidly toward Alexandria, which was evacuated, its stores being removed to Shreveport, three hundred and fifty miles [sic] farther up.

Farragut now felt that his personal presence above Port Hudson was no longer necessary. The Mississippi was ultimately to become the command of Porter, whose vessels were especially fitted for its waters; and that admiral was now at liberty to give his full attention below Vicksburg.

The Confederates had no immediate options for dealing with Farragut. According to General Joseph E. Johnston, it had been hoped that the batteries at Vicksburg and Port Hudson

would prevent the Federal war vessels from occupying the intermediate part of the Mississippi.

With Farragut getting two ships past Port Hudson, Confederate hopes rested on land-based options. Jeffereson Davis, in a letter dated May 8th 1863 to General E. Kirby Smith expressed the belief that

If Pemberton is able to repulse the enemy in his land attack and to maintain possession of both Vicksburg and Port Hudson, the enemy's fleet cannot long remain in the River between those points from their inability to get coal and other necessary supplies, so that we may look forward to the reestablishment of communication with the Trans-Mississippi by the water route heretofore used, unless the enemy can occupy the lower part of Red River. With the decline of the water and the advent of summer the chances in your favor must increase...

There was also the hope that, as you already commented, Lee's attack on the north would draw troops away from Vicksburg. This failure was compounded by the failure of Davis, Secretary of War James Seddon and Johnston to effectively marshal the forces at their disposal to provide relief for Vicksburg.

Donald Stoker, 'The Grand Design: Strategy and the US Civil War' (2010)

4
How did Farragut know he could get his fleet through the Confederate line of "torpedos" at Mobile Bay?
8
Was the Confederacy (effectively) down to six states after the capture of Vicksburg?