What where historic influences on US unemployment rate from 1949 to 2014?

I just found this graph. The red line is the employment-to-population ratio of the USA. I've added some numbers - green for upwards trends, red for downwards trends: 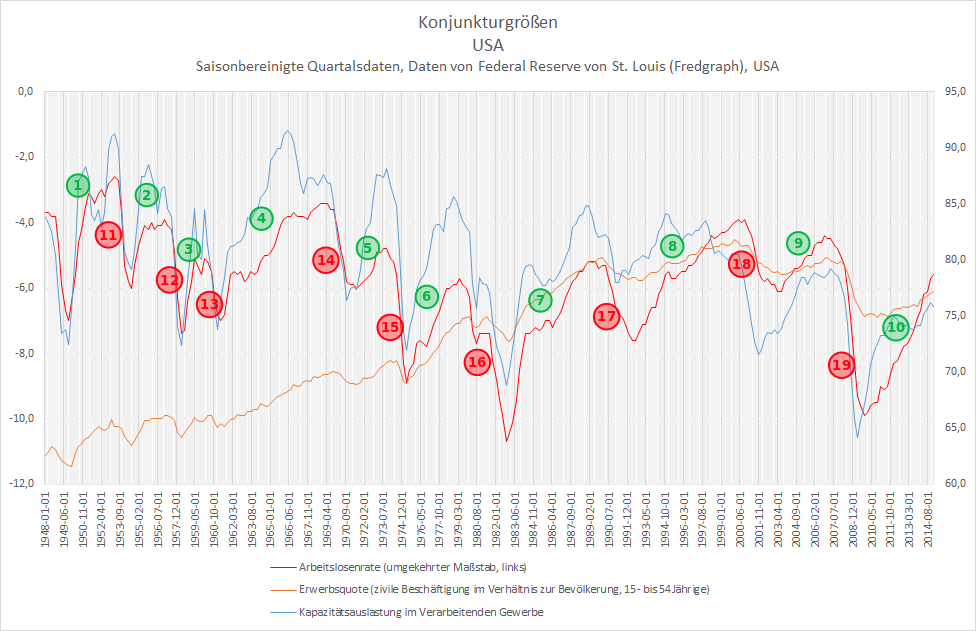 One thing I'm very confused about is the scale. But what I'm interested in is what happened there (a can't read the numbers exactly, this is a best guess):

I found a couple of things that might fit:

Only for 19 I know that this was the Financial crisis of 2007–2008, but I don't know what changed that again in an upwards trend.

So my question here is: What actions / events had a major effect on the US unemployment rate from 1949 to 2014 as shown in this graph?

I'm going to preface this by saying that I don't know German, so I can't go double-check exactly what those terms mean to verify that its being portrayed right (both by you and the authors), as I would normally like to do before answering something like this.

61-63 was not during the Vietnam war. At least not the US's involvement in it. That didn't really get going in a demographically visible way until the late 1960's and early 1970's.

However, 1962 is significant as the year the Baby Boomers started entering the workforce. In theory, this would create a sudden shock to the labor market, as there'd suddenly be a far larger supply of labor than there was in previous years, fighting for presumably roughly the same number of jobs. One would expect an "unemployment to population ratio" to show that.

1990 is a pretty close date to the end of the Cold War. This coincided with a scale-down of military spending in the US, but its possible the rest of the economy absorbed that. It was also (since I'm being generational) the year Generation X (the post-population boom generation) started entering the workforce. Which might have produced the opposite effect that you saw in 1962.

Here's a graph of the US fertility rate. Rotate that forward about 15ish years to when those babies start to enter the labor market, and you can see where that huge pulse of people might have affected the labor market coming and going.*

1990 was also the serious beginning of the computerization of the American office. During this period US productivity growth was running quite high, which effectively allowed companies to grow more without having to actually add jobs. This era ended around 2007, its often theorized because that's when US companies became pretty much fully computerized. Productivity growth since then has sunk back to the pre-1990 growth. 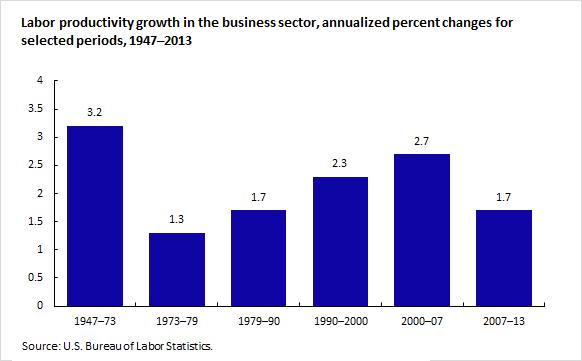 * - The Boomers are now starting to retire from the workforce, which is also likely to have some kind of labor market affect.

All of those correspond to oil production peaks or problems in various oil producers.

In the 50s there was the ramp up and ramp down from Korea, and Suez crisis. Then Iraq problems in 1959. These all correspond to oil supply problems.

Physics explains everything, other explanations are made up.

Not the answer you're looking for? Browse other questions tagged united-states finance or ask your own question.

0
What was the average US unemployment rate for Democrat and Republican presidents?
6
What steps did President Herbert Hoover take to reduce unemployment during the Great Depression?
8
Where did the term "Radical Republican" come from?
2
Where can I find annual population estimates for each US state, from 1865-1899?
17
Where did Southern Fried Chicken come from?
22
What are these historical references (from a novel)?
5
Why did the death rate increase in US cities in 1934, when it decreased in each year from 1929 to 1933
6
Where did this coin come from?
3
Where can I find what the cost of a train ticket in the USA was in 1930?