What were the international space arrangements and scientific purposes Eisenhower spoke of in October 1957?

The Vanguard program started with Vanguard 1:

Vanguard 1 (ID: 1958-Beta 2) is an American satellite that was the fourth artificial Earth orbital satellite to be successfully launched (following Sputnik 1, Sputnik 2, and Explorer 1). Vanguard 1 was the first satellite to have solar electric power.

Question What were the international space arrangements and scientific purposes Eisenhower spoke of in October 1957?

The Quote: I've transcribed the block quote below myself from the video clip at http://dbsmaint.galib.uga.edu/news/clips/wsbn33649.html found at Series WSB-TV newsflim clips of Dwight D. Eisenhower congratulating the Soviets on Sputnik and commenting on Project Vanguard and the U.S. ballistic missile program, Washington, D.C., 1957 October 9. It seems fairly accurate, but I don't have an independent official transcript for verification.

As to the Soviet satellite, we congratulate Soviet scientists upon putting a satellite into orbit.

The United States satellite program has been designed from its inception for maximum results in scientific research.

I consider our country’s satellite program to be well designed and properly scheduled to achieve the scientific purposes for which it was initiated.

We are therefore carrying the program forward in keeping with our arrangements with the international scientific community. (emphasis added) 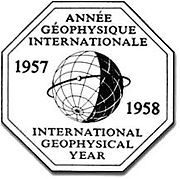 The United States' Explorer 1 satellite was launched as one of the projects for that year.

The US intention to launch an artificial satellite during the IGY had been announced in July 1955:

"On behalf of the President, I am now announcing that the President has approved plans by this country for going ahead with the launching of small earth-circling satellites as part of the United States participation in the International Geophysical Year... This program will for the first time in history enable scientists throughout the world to make sustained observations in the regions beyond the earth's atmosphere."

These were the "arrangements with the international scientific community" the Eisenhower was talking about, and that led to the Vanguard program and the launch of Explorer 1 on 31 January 1958 (and also the later missions of the Explorer Program).

Of course, in the event the Soviet Union launched its satellite, Sputnik 1, on 4 October 1957 - before the United States could launch Explorer 1. This is why Eisenhower sounds slightly defensive when talking about the US program.

Perhaps the best-known discovery from Explorer 1 was what is now known as the Van Allen radiation belt. This was named after Dr. James Van Allen of the University of Iowa, who had designed the science package for Explorer 1. That package consisted of:

The Smithsonian National Air and Space Museum has a number of pictures of the unit (and contemporary mock-ups) on it's website.

The measurements transmitted from those instruments were the "scientific purposes" that Eisenhower was speaking about. These were expected to provide data for the scientific community about the environment that existed in Earth orbit, and was also expected to inform the design of future satellites.

All the raw data was shared and held in a series of World Data Centres maintained by the International Council of Scientific Unions (ICSU). That was all part of the arrangements agreed for the IGY.

This formed a significant part of the contribution that the US had agreed to make to scientific research in International Geophysical Year.

Not the answer you're looking for? Browse other questions tagged united-states soviet-union cold-war science spaceflight or ask your own question.

62
What were the reasons for the Renaissance / scientific revolution in Europe?
12
How Successful Were the International Brigades?
15
What role did the space race play in reducing the nuclear threat during the 1960s?
13
The Needham Question: What stunted China's technological and proto-scientific advancement?
14
How were the Venera Probe missions received/presented in the Western world during the space race?
6
How important were reprints of scientific articles in scientific practice and communications before the the copier, the computer and the internet?
5
What was the first scientific article to give a recognisably "modern" citation to another article?
6
How did Taiwan participate in the International Geophysical Year of 1957-58?
27
What is the earliest mention of space travel?