On April 20th 1774, near Carmel, California, Juan Bautista de Anza wrote in his diary about finding the mast of a ship of unknown origin (his compatriot Garcés did not record it). Here is his complete diary entry and the translation given by Web de Anza:

Wednesday, April 20. I went to the mission of San (Carlos del) Carmelo, distance from the presidio a little more than a league, both to see this new establishment, the last in northern California, and to return the visit made me yesterday by the reverend father superior of its missionaries. A few days before my arrival here the mast of a ship was stranded on the nearby beach, whose construction and the wood of which it is made are unknown to those of our people who live here, but they believe it was broken two-thirds off. It is entirely run through with very strong nails with long heads, and with two points which do not pass through to be clinched. Their iron has not rusted at all nor are the points blunt which projected where it was broken. From these last two circumstances the few persons who are experienced in the matter of vessels infer that it cannot be very long ago that the vessel from which this mast came was wrecked. At the first opportunity that offers it will be taken to the port of San Blas in order that it may be carefully examined.

This anecdote from California history describes a mysterious piece of sea debris, a mast with unusual double-pointed nails. Since numerous Japanese sengokubune ships that lost their rudders in storms drifted to North America (see The Shogun's Reluctant Ambassadors by Katherine Plummer), it seems possibly Japanese, but not being able to confirm that directly I am broadening the question to narrow in on the interesting nails.

The most salient part of his description is the fact that the nails, of good iron, were two-pointed and did not penetrate to be clinched. One dictionary calls a two-pointed nail a mordant.

Since clinching is a technical term, here is an illustration of the technique, bending protruding nail tips back into the wood: 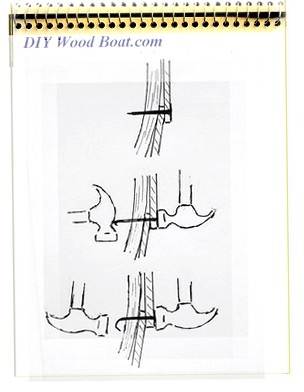 Although this one is described as clinching, here is an illustration of a two-pointed nail that spreads out: 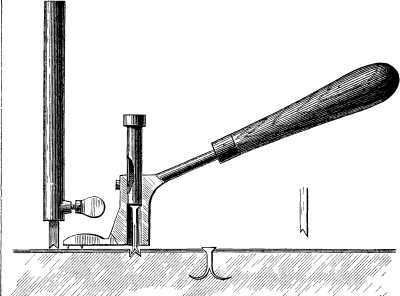 Does Anza's description of the two-pointed nails of excellent iron point to Japanese or Boston or Baltic construction? Who was using two-pointed, non-clinched nails for shipbuilding in the mid-1700s?

It was very common for Japanese ships to wash up in America. They were salvaged for ore. See Wikipedia on Native American iron working.

Not the answer you're looking for? Browse other questions tagged identification technology age-of-sail ships metallurgy or ask your own question.

10
Couldn't Japan have solved the problem of drifting at sea?

5
Who cataloged the ships that visited Alta California?
1
Ports with ships in the commercial Halifax trade, late 18th Century
1
Would a commissioned officer in the Royal Navy during the mid-late 18th century ever sail on a vessel other than a man-o-war, ship of the line, etc?