What was the technology in pre-war traffic recorders?

In 1936, Nevada was using an automated traffic recorder, a device that counts the number of passing vehicles: 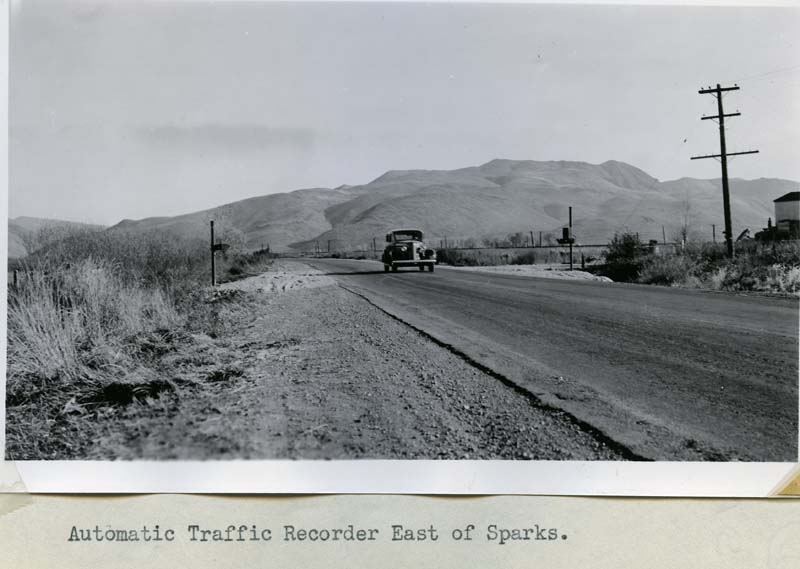 The device must have included a vehicle detector and a recording mechanism. Today it might be implemented with a reflected infrared beam and a processor running a controller program which writes out an event log. Lots of variations are possible.

How did the traffic recorders of 1936 work? In what form were their reports stored and received?

Kudos to justCal for bringing the NDOT site to our attention.

It's probably not possible to know how the specific apparatus in that photo works, but it appears that several inventors were trying to automate traffic counting at the time using sophisticated Rube Goldberg types of machines from the pre-transistor age.

You can see some (all?) of them listed in this patent. I briefly go through some in what follows. The years quoted are the claim dates, rather than the year the patents were granted, since this is what matters to get a feel of what might have been out there. I'm paraphrasing their content more often than not when trying to shed light on how they work.

This patent seems to be about detecting traffic, rather than counting it. For instance ahead of a curve to light up a warning sign that prompts drivers to slow down.

I found it quite interesting regardless, in that it relies on the iron in vehicles besides it to disturb a magnetic needle, thereby creating an electric contact. It also goes through various methods that seem to have been in use back then to do the same type of things, and briefly explains why they are fragile as it introduces why that method is better.

Judging by the description, the vehicle detection device below seems to rely on the vehicle's weight applying pressure to bring the wire in each strip in contact with another wire (under them?), thus creating some current. 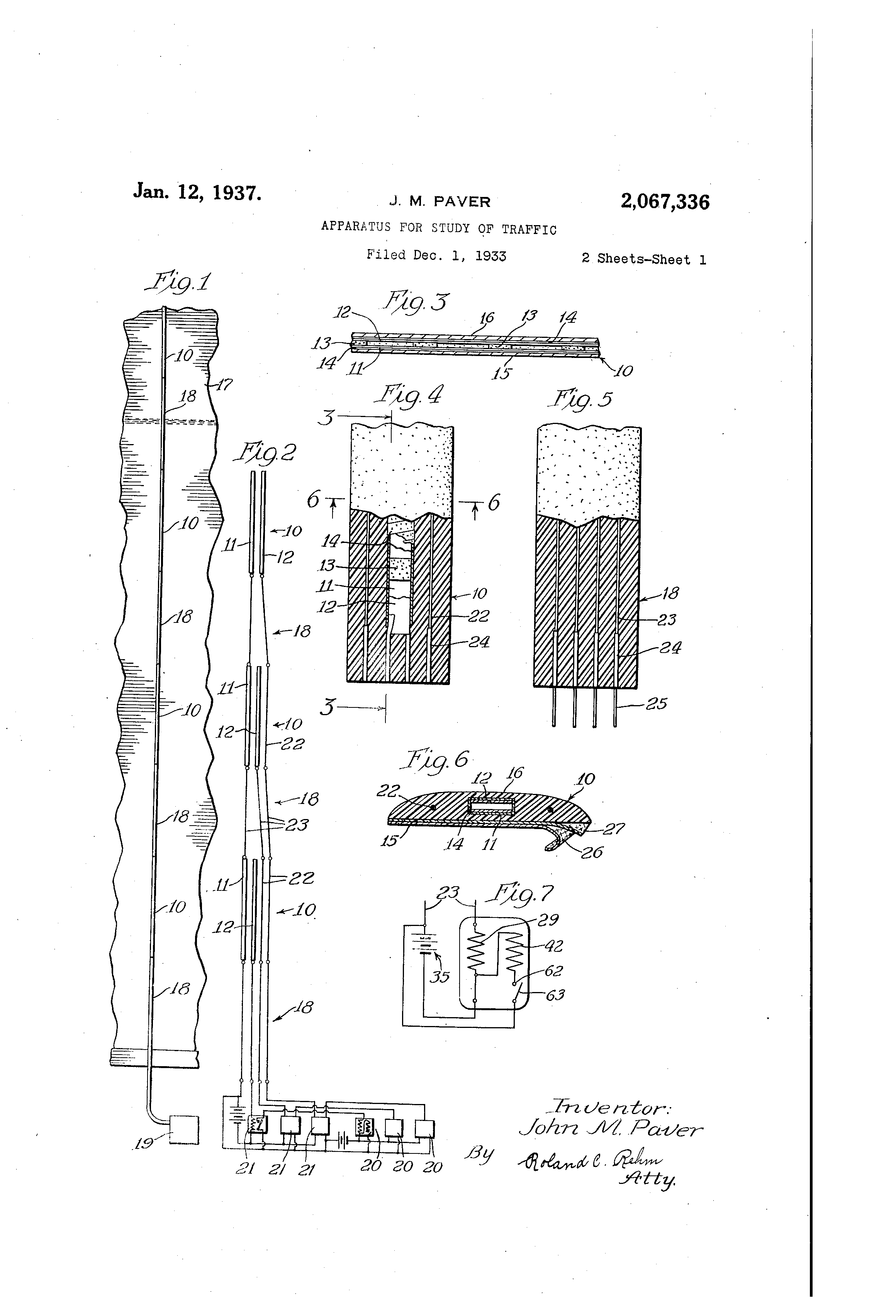 (Aside: seeing how piezoelectricity was discovered in the late 19th century I'm a bit surprised that the inventor went with this highly mechanical and probably fragile option rather than some piezoelectric material to get a similar effect.)

The patent then goes on to describe a magnetically actuated counting device that keeps track of the current count and produces a printout of the current reading on a tape or the like at a given interval. 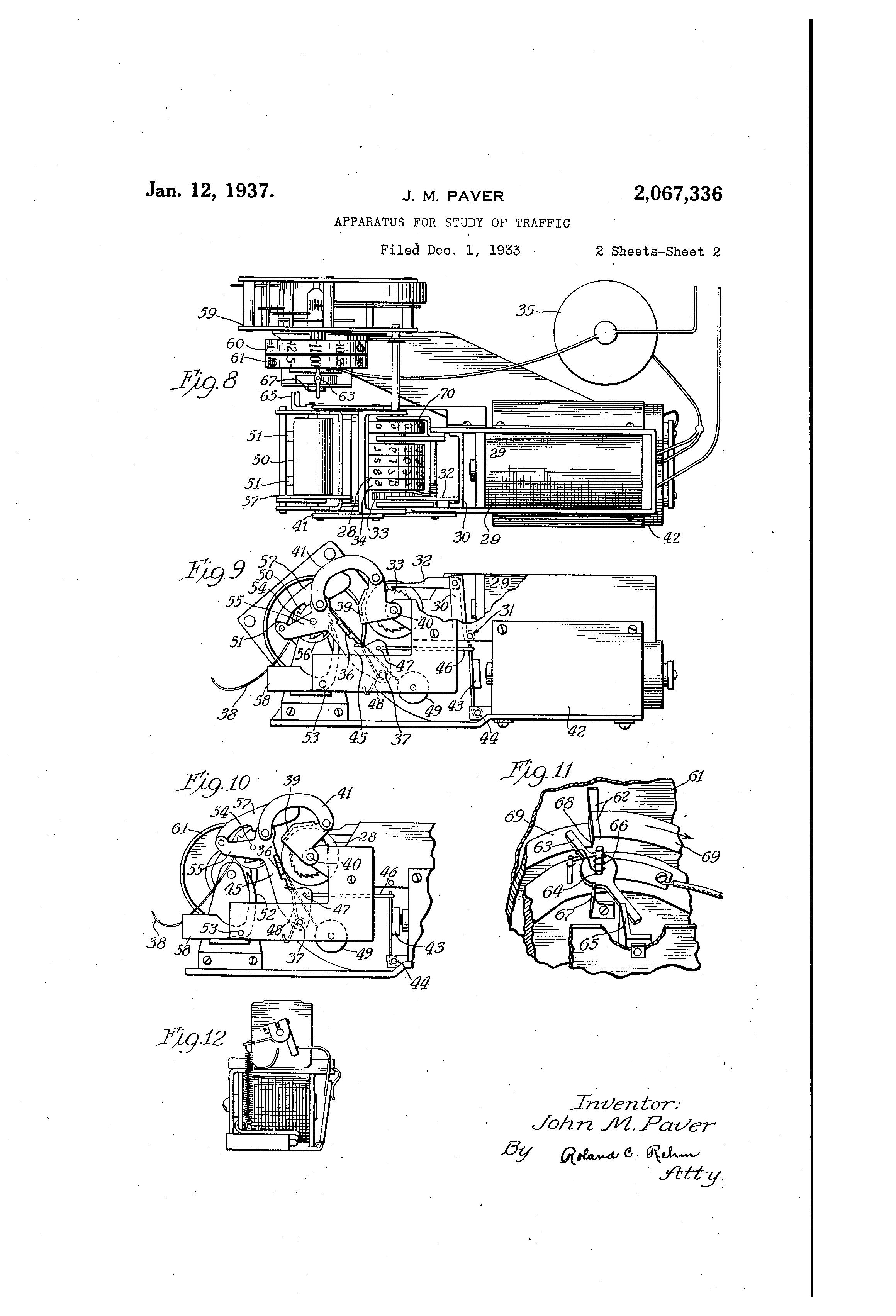 This next patent describes another type of counter.

It seems to rely on a light beam which is focused on a light sensitive cell. When a shadow is thrown in the cell, a circuit is made. It also seems to describe another a treadle switch that can be used to the same effect, and how this can all be used to count moving vehicles. It explicitly doesn't bother describing the counting mechanism, referring the reader to "a pair of Veeder or other suitable accumulative counting devices". The Veeder in there seems to reference a mechanical counter made by a company called Veeder-Root (a bit like googling has become synonym for using a search engine). 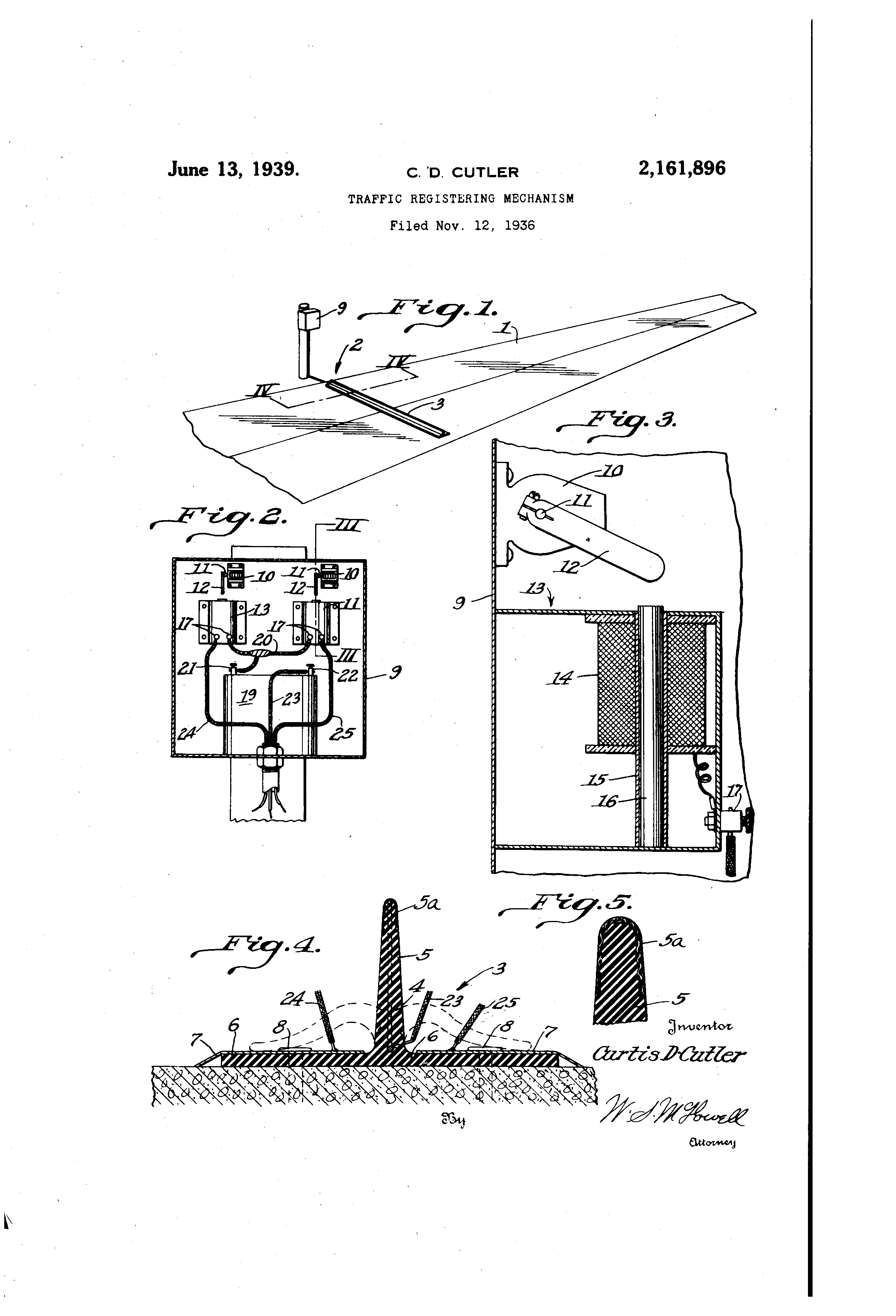 As the name suggests this patent describes a road strip. The mechanism seems very similar to the one further up from 1933, and it explicitly states that it's a continuation of the latter.

The following are three more pre-transistor age patents of potential interest, which I haven't gone through but which you or some other reader might find interesting.

The device pictured is likely the product of IBM. Research brings up several books, which unfortunately only offer snippet views, but that is enough for a lead:

National Research Council (U.S.). Highway Research Board - 1960 - ‎Snippet view - ‎More editions Recording Mechanism on Traffic Recorders, Nevada Research by Nevada on a traffic recorder design initially developed by Texas, ... which is a satisfactory replacement for the recording mechanism of the IBM fixed recorders installed in 1936.

This matches precisely with the time indicated in the NDOT gallery for this photo.

A book on the history of IBM in Endicott, on page 44, has a closeup showing the IBM device. 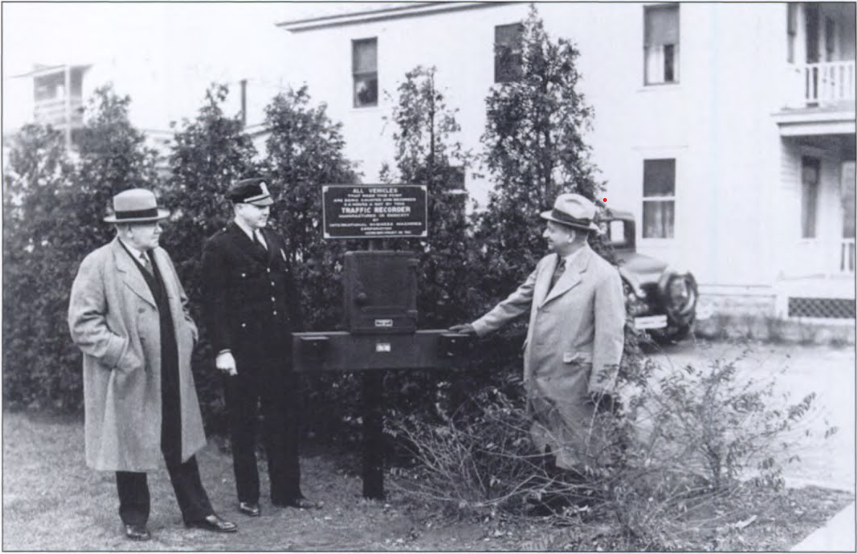 Note the shape, the box on top of the bar, can be seen in the photo from 1936 on the right side of the roadway. From the device photo we seem to have an emitter/detector pair, with the other side undoubtedly just a passive reflective surface. Note the powerlines in the highway photo appear behind the 'smart' side of the device.

Other snippets from searching bring up photoelectric recording stations, and apparently similar systems were placed in Wisconsin the same year, with a brief explanation of their operating principles:

In addition to the manual traffic counts, 12 fixed-type automatic recorders were installed in November, 1936, ... Machines of this type count traffic by means of properly adapted photoelectric cell relays. Continuous operation was maintained and cumulative hourly counts were automatically recorded on paper tapes.

Not the answer you're looking for? Browse other questions tagged technology travel nevada or ask your own question.

11
When were public roads cleaned electromagnetically?

13
What new technology/tactics allowed the breakthrough of the trenches in WW I western front?
12
Was the German Empire responsible for the advancement of German technology?
3
What was the available level of agricultural technology in late 2nd century China?
2
What machine technology did the Egyptians have to build the great pyramids?
11
1850s steel technology advance before the Bessemer converter
6
What it was like to travel on a Viking ship?
4
In general, what was the level of technology like in central Africa, just before the scramble for Africa?
4
How were the earliest automatic traffic lights automated?
6
What was the typical speed of a tramp steamship?