When was the first recorded example of a race competition in human history?

Individuals in a race compete with another or others to see who is fastest. But when the race competition was invented? It is reported that races were popular in the ancient Olympic games. Is this the first recorded example of a race competition in human history? Or there are older examples? 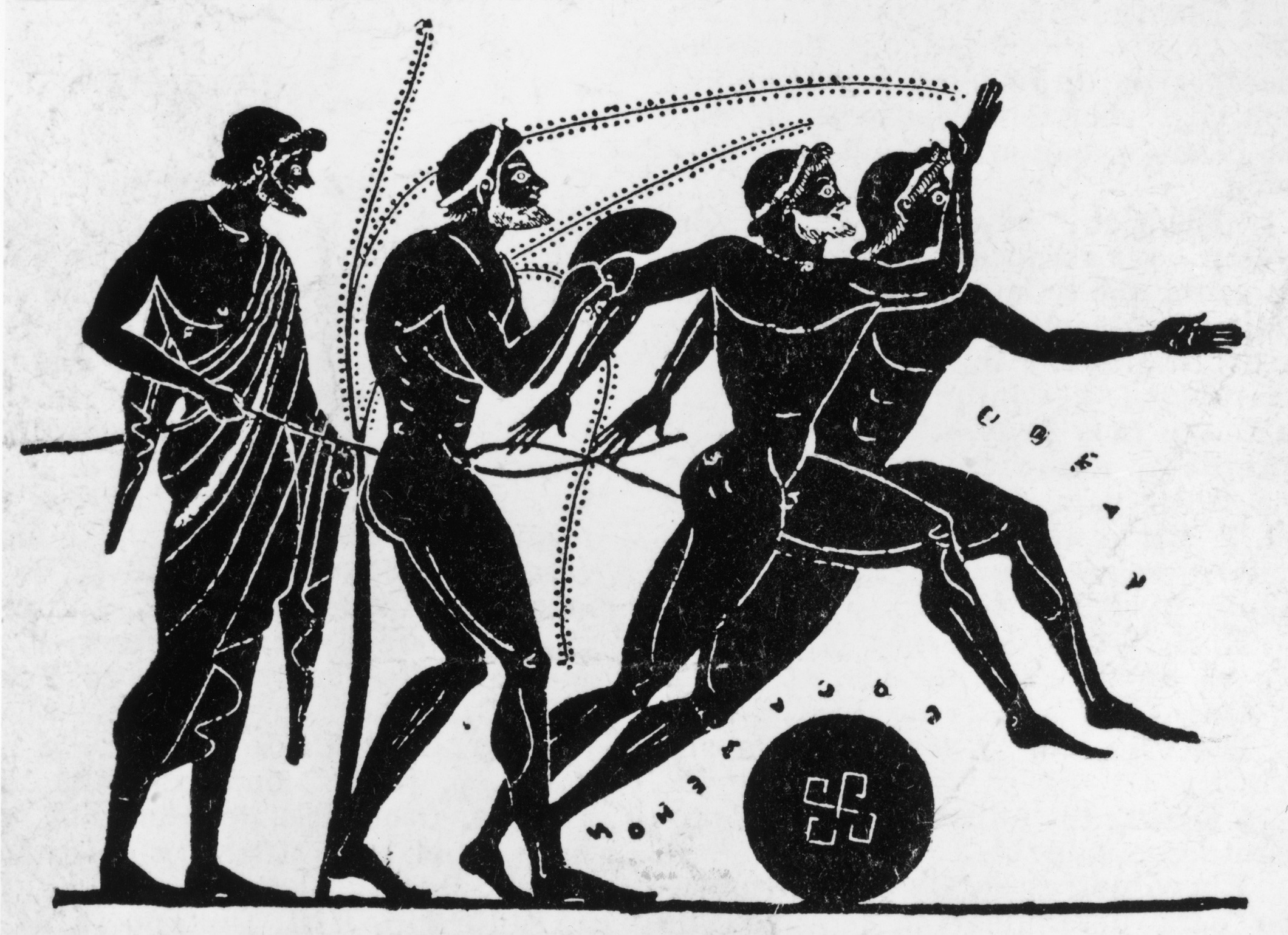 The earliest evidence of footraces may well be from Sumer around 2000 BC. You may also want to consider the Sed festival in Egypt which dates back to before 3000 BC and which involved the pharaoh having to complete a race after ruling for 30 years, this in order to prove his fitness to continue to rule.

Sumerian documents also record that some of the general population participated in organized running events. One month was known as the “footrace month,” during which there was an annual run as part of the festivities in the city of Umma, located between Nippur and Ur.

Specific examples are given in the article Running Phenomena in Ancient Sumer by Deane Anderson Lamont in the Journal of Sport History (vol 22, No. 3, 1995). In the city of Umma, two tablets have been found dating to the reign of Shu-Suen (about 2038 to 2030 BC). Both of them list provisions for 'city race-making' during the 8th month in Sumer (15th Oct to 15th Nov).

Lamont also cites a reference to "foot-race month" in a legal document dating to the Babylonian period from around 1800 BC.

The earliest mention of a run is recorded in a royal hymn dating to c. 2088 BC, and concerns a race against time by King Shulgi of Ur himself:

King Shulgi planned to appear at two far-distant festival locations (Nippur and Ur) in order to be seen in celebration with his subjects at each site. He was to celebrate the eshesh feasts in the important cities on the "same day"

Below is an excerpt from "Sulgi the King of the Road" (as labelled by Samuel Kramer):

Like a wild ass I galloped, With my heart full of joy, I ran onward. Racing like a solitary wild-donkey, (Before) Utu set his face toward his 'house', I traversed a distance of fifteen 'miles'. My sag-ur-sag priests gazed at me (with astonishment): In Nippur and Ur, in one day, I celebrated their e s e s-festival!

It is certainly possible that the king could have attended both events if he was in a "highly trained physiological state". Earlier lines in the verse suggest this was a round trip, a claim which has been treated with understandable scepticism; the round trip would have been over 200 miles, while the current world record for the longest distance run in a day is 188.59 miles (set in 1997). In a footnote, Klein also mentions a verse where Shulgi ran with other road racers:

Sulgi is praised in such terms as, for example, "a swift runner, a 'hurricane', the strength of his loins is never ending"; or "a runner who emerges in/from the country-sides," "who competes with the tireless (racers) of the road."

This was not a race in the sense you may interested in as it had only one participant (the pharaoh) and there's no clear time limit; the challenge was to complete the race distance. In the article The Sed-festival (Heb Sed) Renewal of the kings' Reign, Dr. Sameh M. Arab of Alexandria University writes:

The Sed festival (Heb Sed), named after the jackal god "Sed", was the most important celebration of kingship in ancient Egypt. Its origin rooted in the pre-dynastic times (before 3150 BC) and lasted until the Ptolemaic Period, celebrating the continued rule of the pharaoh.

The festival aimed to renew the reigning king's power that had become depleted over time, endangering the continued existence of the state. This was a replacement of the more ancient ritual of killing the king who became unable to continue his reign effectively because of ageing.

Thus, originally, the ruler was effectively running for his throne and even his life, though it is clear that later on it became much more of a ritual rather than an actual test of the ruler's physical capabilities. 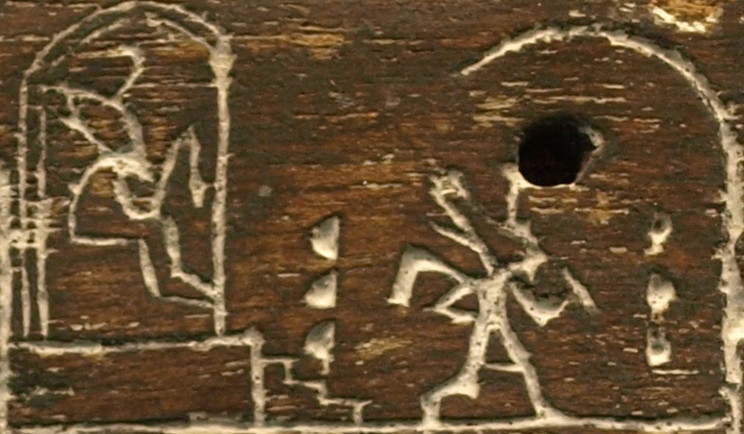 "Ebony label depicting the pharaoh Den, found in his tomb in Abydos, circa 3000 BC. Top register depicts the king running in his Heb Sed festival as well as seated on a throne. Lower register depicts the destruction of enemy strongholds and the taking of captives." Attribution: British Museum [CC BY 2.5 (https://creativecommons.org/licenses/by/2.5)]. Source.

Perhaps debatably, the first record of racing could come from the mortuary temple of Sahure where it is claimed on wikipedia that racing boats for the military are depicted.

Development of the Egyptian navy, wikipedia

The extensive nautical scenes from Sahure's mortuary complex are sufficiently detailed to show that specialized racing boats for the military and perhaps for ceremonial training were built at the time.[119] 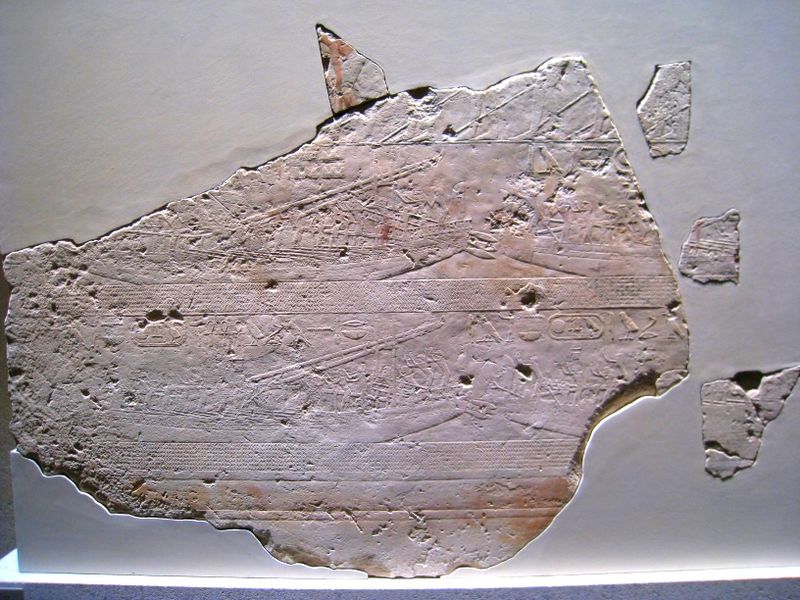 The estimated time period for this event is thought to be somewhere between 2465 and 2325 BC. 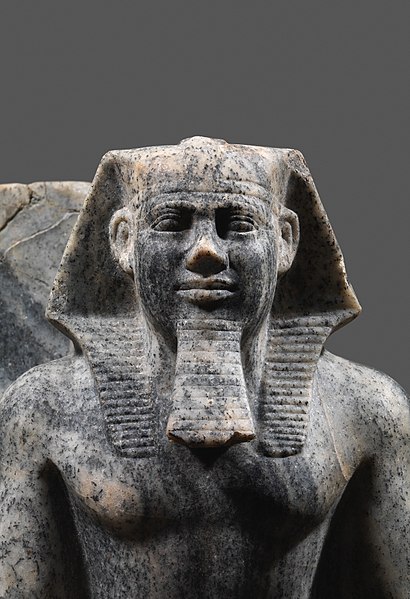 Not the answer you're looking for? Browse other questions tagged ancient-history cultural-history sports or ask your own question.

17
Where was human history first purposely recorded?
10
How to validate a historical source
6
Are the following 5 tenets of historical record examination considered complete today?
11
What are the ancient origins of the Medicine Ball?
6
Why did the Australian IOC deny that Peter Norman was excluded from the 1972 Olympics for supporting racial equality?
3
When and where arose the first civilization?
4
Why and when did countries develop long names that include the form of government?
7
What is the earliest depiction of a crane?
19
What is the earliest recorded female name in history?