From the early Islamic conquests in the seventh and eighth centuries, down to the nineteenth or early twentieth centuries, under Sharia law, Muslim rulers generally allowed non-Muslim subjects (‘dhimmis’) to practice their religions on certain conditions. These included being disarmed, not serving in the army and paying a tax called the ‘Jizya’.

The Jizya was abolished as a result of Western influence or pressure, or Western colonial rule, in most Muslim countries during the nineteenth or early twentieth centuries. More recently e.g. the so-called ‘Islamic State’ in Syria reportedly demanded payment of a ‘Jizya’ from non-Muslims, although whether that was a proper use of the practice is I believe disputed.

Can anyone provide any figures or examples, with sources and preferably some idea of what it was worth compared to present day prices?

Most of us do not know off the top of our heads what, say, 1 dinar would actually buy in Eleventh Century Aleppo, and how much of a hardship it was to have to pay it.

The words like “Islam” and “Sharia” are emotive these days. Some things I have read about the Jizya seem to be coloured by the authors’ own views for or against Islam. I am grateful for all answers, but please keep your answers moderate in tone, open minded and based on evidence, rather than setting out to attack or defend Islam.

A quick search brings up the book The Mughal World: Life in India's Last Golden Age By Abraham Eraly, pg 284, which seems to have some figures for this particular time and reign:

Another source, History Of Aurangzib Vol. 3, by Sarkar, Jadunath, shows the same information: 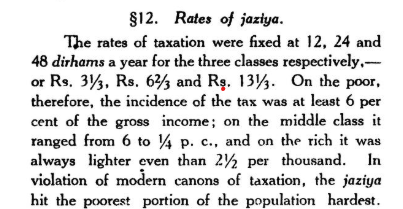 Not the answer you're looking for? Browse other questions tagged christianity middle-east judaism islamic-history or ask your own question.

14
Did Gandhi ever make a comment about Islam?
14
Military training in the Hijaz during early Islamic era
77
Why weren't Indians converted en masse to Islam or Christianity?
13
What historical evidence do we have for the existence of Mohammed?
5
Were there distinctions between Arab, Berbers and Iberian Muslims in 10th century Islamic Spain?
8
Were early mosques originally oriented on Petra instead of Mecca according to archaeological record?
36
Was climate a factor in the spread of Islam?