Why couldn't soldiers sight their own weapons without officers' orders?

Why would British officers dictate range, and so micromanage, the enlisted? Why not simply dictate a broader, vaguer command such as "Adjust or check your sights"?

The question asks why British officers would micromanage enlisted troops by doing things like dictating the range to sight their rifles. This type of "micromanaging" is a foundation of the military tactics of that time and one of the key differences between a "military unit" and a "group of men with guns" in the period being discussed.

A few hundred years of warfare using muskets preceded by thousands of years of warfare using bows had left the concept of massed volley fire as a deeply ingrained component of military doctrine, and for good reason since it worked so well. Machineguns were still too new and somewhat uncommon so their impact on infantry tactics was only beginning to emerge. Without a machinegun, massed volley fire was still the best way for units of infantry to engage other units of infantry on a "conventional" battlefield.

At the time of the Boer wars, British infantry doctrine dictated that soldiers would only fire individually when fighting at distances less than 300 yards. Any fighting at distances beyond that was only allowed to occur using volley fire with everybody in the unit firing as a single unit. The only way this type of volley firing can occur is if the unit leader "micromanages" the unit by dictating the distance selected on the rifle sights, dictating the target or target area to engage, when to fire, and when to stop firing.

With this concept of massed fire so deeply ingrained in the military mind and such a foundation of their tactics, infantrymen were taught from the beginning of their training that they are to adjust the range setting on their rifle sights when (and only when) they are ordered to do so by their officer. Discipline is critical to military order and British solders had a well earned reputation for discipline and order. If the officers ordered that sights be adjusted to 500 yards then that is where they were going to stay adjusted until a new order was given. Second guessing orders in the middle of a firefight is not something that a well-trained soldier of that day would ever consider.

And to be clear, when we are talking about adjusting the sights on the rifle in this context we are not talking about zeroing the rifle sights. Some comments in response to another answer seem to be confusing these two concepts. We are talking about soldiers raising the folding "ladder" sight into position for long distance firing and adjusting it to the distance ordered by the unit leader.

This is the rear sight of a Martini-Henry rifle folded down for short range firing or to keep it from being damaged during storage or transport. 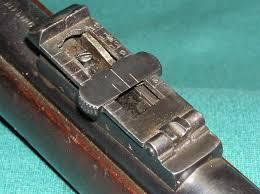 And this is the sight raised into position for longer range volley fire. 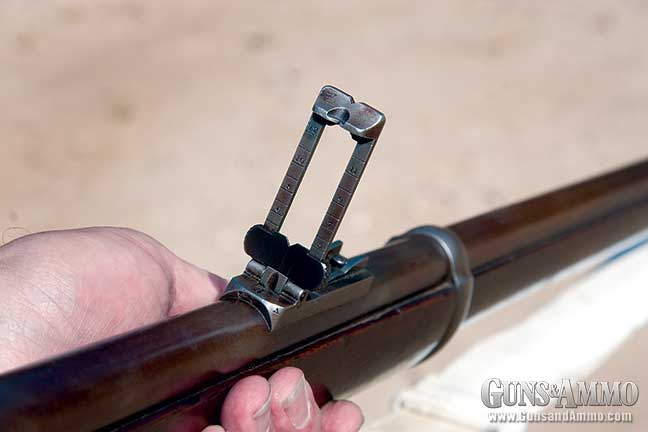 Another important factor that is not mentioned in the wikipedia article quoted in the question is the effects on bullet trajectory when shooting at a downward or upward angle. The soldiers were shooting down the hill towards their attackers which means the bullet's arc does not "fall" as far relative to the point of aim indicated through the sights. Any British soldiers who were not experienced enough to understand the effects of firing at a downward angle would likely still have been firing too high even if they did flip their sights down to the short range position.

It was a remnant of the class distinction in British life between aristocratic officers and common soldiers and enlisted men. In British units the men were instructed, forcefully, to simply obey orders without question, with punishment for those who objected. This attitude was why in World War One first the Canadians, and then the other Commonwealth troops refused to serve under British Officers, and insisted in comprising their own divisions.

In Commonwealth units, in both the Boer Wars and First World War, this attitude was soundly rejected. The units were volunteers from closely knit communities, and the junior officers often knew many of the men in their command from prior to enlistment. A mutual trust already existed, with friction in consequence between junior and senior officers in each battalion.

An example of this is the approach to artillery schedules used by the Canadian Corps at Vimy Ridge. The British practice was to issue schedules for the artillery's walking barrage only to officers. For the Canadian assault on Vimy, Currie convinced Byng to issue the orders down to every Corporal, thus enabling troops to maintain the schedule even if officers were killed, wounded or separated during the approach. This, combined with other innovations, allowed the Canadians to be in the German trenches less than 30 seconds after the artillery barrage lifted, often catching the German troops disarmed.

(The above is taken from Pierre Berton's excellent book Vimy).