Is it true that Nazi Germany replaced prices ending in .99 by round prices and called this “Aryan pricing”?

On a questionable website full of revisionist pro-nazi propaganda, which is not worth linking to (*), I found the following statement:

(*) Please don't ask me what I was doing there. If you really want to find the quoted site just put the quote in your favourite search engine.

I find the concept very interesting. According to that other question those psychological pricing ending in 99 were already around since the end of the XIXth century (which I find shocking as I always believed this was a modern idea).

So such prices could have been seen in pre-Nazi Germany. And I can totally see how people were annoyed at the sellers trying to rip them off with those $.99 prices and be relieved that this annoying practice end once the NS regime is in place. This would increase the confidence of the regime which would be perceived as less corrupt. Unfortunately I cannot find any other reference about that than this revisionist site.

So is there any verified truth about this statement?

EDIT: About the $ sign in the quote: it could have been used as a general symbol meaning money in an English-language text, and does not necessarily refer to the USD currency, which obviously was irrelevant in Nazi Germany. But the implication seems to be: as the seller seems at least to refer to his ideology – originating from Nazi Germany – the question is still whether this was a) a thing for a national-socialist then 'to not like psychological pricing' and call round prices 'Aryan' pricing, declaring that the 'Aryan' and thus preferred behaviour for sellers and b) whether this then found its way into actual German law when the Nazi's were legislating, outright forbidding such pricing strategies.

A quick search for the term: Gebrochener Preis (Psychological pricing), including some Bachelor papers, does not mention pre-war usage in Germany at all.

One would have to go through newspaper archives to see how prices were displayed at the time.

The author of your quote seems to have produced quite a lot of articles in the few years. Since he quotes someone who tells him directly about this claim and uses Dollars, I assume he is speaking about a American National Socialist.

Also a German bookseller would know that Fixed book pricing has been in force since 1888 and therefore would not make such a statement within the context of his profession.

As noted in other comments, the given quote inside the original article is completely out of context of the article. My impression is that the author is using every opportunity too push his agenda. Such claims should be taken with a ton of salt.

The practical reason for .95 or .99 pricing isn't psychological manipulation of the customers at all. That might work on some people, but not many. It actually came into use to combat thefts by retail staff, in the days where most payments were in cash.

If the Nazis abolished it, the effects of "Aryan pricing" would have been to make theft and corruption easier, and to reassure people paranoid about being fooled. Both of those seem quite compatible with Nazism as it was practiced.

If a customer hands over an exact sum and turns away to leave the shop, the sales assistant has an opportunity to pocket the money. If the customer is expecting change - even a penny - they tend to carry on paying attention to the assistant, making sleight-of-hand with the money more difficult.

It looks wrong to the customer if an assistant gives change out of their own pocket, purse or wallet, so the assistant has to open the till/register to give change, and the customer expects to see the money go into the till. This is also why many tills would not open except on a sale, and printed the amount rung up on an internal roll of paper.

Source: explanation from the keeper of a shop I worked in during the 1970s. Wikipedia has the same story, and notes that the first till was called "Ritty's Incorruptible Cashier", supporting the reason.

Keeping .95 and .99 pricing now that most payment are electronic seems to be a tradition of "that's the way pricing is done", although I have noticed it becoming less common in recent years.

The concept that informs this "Aryan pricing" ideology the book seller orients himself on is based on the antisemitic stereotype of 'unfair pricing done by Jews', then (and now, don't search the net for the word) called: "Judenpreise" (hereafter JP).

The context for the precise quote that informed this question seems to be an American citizen, not a German, as detailed in Mark Johnson's answer. As this American in the memory of the reporter seems to base his reasons on NS ideology, it is still interesting to see whether or how Nazis followed this principle in reality, and if they made this into actual law.

Interestingly, these JP were variously perceived as too low, undercutting competition and enforcing a lower quality standard across the market, as well as too high, derived from monopolies or usury. These folk explanations were already described, analysed for example by Werner Sombart in his (1911): "Die Juden und das Wirtschaftsleben." (1911) Sombart later had allegedly ties to national-socialism and his personal views are difficult to ascertain regarding antisemitism as a whole. But in that book he nevertheless offers a much more differentiating view on the subject matter, that at the very least explains this race around pricing goods as a more 'natural' development within capitalism (than the true NS-conspiracy thinking).

It seems unlikely that this pricing regulation – and the consequential effective stifling of competition via prices – ever went into actual law during the third Reich. Checking changes to the German versions of laws pertaining to business practices does not reveal anything obviously relevant to this 'pricing things preferably (not) to .99 numbers'.

What Nazi legislators did do was enshrining into law the Rabattgesetz that was in effect from 1934 to 2001. It regulated discounts and allowances within a very tight frame – to ensure "more honest prices". This was officially 'directed against Jews', as they claimed at the time. This had no direct relation to consumer end prices in the sense of 'no mathematical effect towards or a away from .99'. It was said that if a sale was to be finalised significantly differing from the price advertised, this would be sign of dishonest starting price, and it effectively prohibited any form of haggling, systems of rebate and so on – it is said. More on Rabattgesetz in Götz Aly: "Rasse und Klasse", chapter "Handfeste Brauchbarkeit – Das Rabattgesetz oder die Freiheit des Feilschens", (p 61–64), Fischer: Frankfurt, 2003:

In all naivety, the twist pointed to the origin of the law, which at the time was explicitly directed against "haggling", the "alien merchant spirit of the liberalist system era" and the "Jewish grocer soul". Already on May 12, 1933 the law for the protection of the national retail trade had prevented the "evil of the encumbrance system", on November 25 of the same year followed the "RabG", the Reichs-Rabattgesetz. Both laws aimed at the "purification of competition" and the fight against "degeneracy", as the commentator and co-initiator of the law, Elmar Michel, wrote. His work appeared in 1934 and 1957: "Nothing needed to be changed in its main features," it says in the second edition. Why should it be? Michel was first a member of the government council in the Reich Ministry of Economics, then a ministerial director in the Federal Republic. No, he got excited in 1957, the RabG "contains no typical National Socialist thoughts". After all, the "fight against department stores was not limited to the NSDAP". Last but not least, Michel himself had already worked on the law in 1932.

So, while this does draw on antisemitism and was enacted under Nazi rule, it was devised before and in effect long after.

Nevertheless you can imagine that the most hardened antisemites in Germany were all ears to believe every crazy theory that somehow blamed 'the Jews' for something. Especially Julius Streicher seems to not have known any limits for absurdity in believing and promoting antisemitic accusations. His own newspaper is therefore an example to analyse. From a search through advertisements available on image sites from between 1933 and 1945 it seems very obvious that not all products were priced evenly. But as Streicher was one of the biggest haters, are ads in his paper conforming to this "Aryan pricing" theory?

Ads giving prices in that paper:

These prices do look somewhat simplified.

If you compare that to how the same paper complains explicitly about JP in "Der Stürmer", No 5, February 1932: 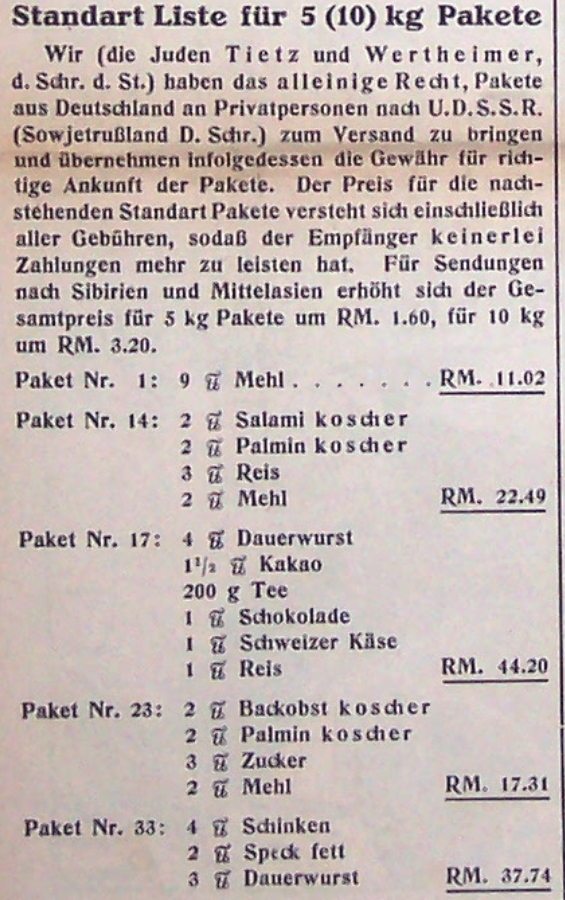 But that numbers ending in 9 weren't taboo should be quite clear:

This might still seem like a real effect to observe: "good national-socialists avoided prices ending in .x9"? Well, not really. On archive.org you have an easier time researching catalogues from the era, compared to image searching the net for contemporary ads giving prices. You will notice that the disdain for listings of prices ending in .x9 is very evident for all catalogues from 1933–1945. But the same effect is seen for pre-1933 listings, and also for listings after 1945. For larger sums, round numbers, .5 or .25 are represented more often than today. For smaller items with this effect seems unobservable

Psychological pricing towards the .x9 limit seems to just take its hold much later than in the US. But as this supposed effect isn't restricted to decimal places, but also applies to for example 990 RM compared to 1000 RM. Then we do not have to look much further than the Volkswagen, which was planned from the start to be sold at 990 RM.

Not the answer you're looking for? Browse other questions tagged nazi-germany economy everyday-life or ask your own question.

13
What changes happened in law enforcement and criminal trials during the Nazi era in Germany?
4
Did Hitler get called a fascist by his opponents within Germany? Did he or other Nazis have a problem with that?
2
Nazi Germany - Income of low-wage workers, and prices of food and other items?
10
Considering what was known about Hitler in 1933, why would German bishops declare that Catholics could cooperate with the new State?
11
Is there documentary evidence that Stalin intended/prepared to fight Germany after the Nazi-Soviet pact?
11
What oath did medical students take in Nazi Germany between 1933 and 1945?
8
Did the Nazis identify as being Fascists? How exactly did they view themselves?