When did inadequate or inaccurate maps produce important historical consequences?

For example, Christopher Columbus' sense of place in the New World was perhaps shaped by a c. 1491 map made by Henricus Martellus: 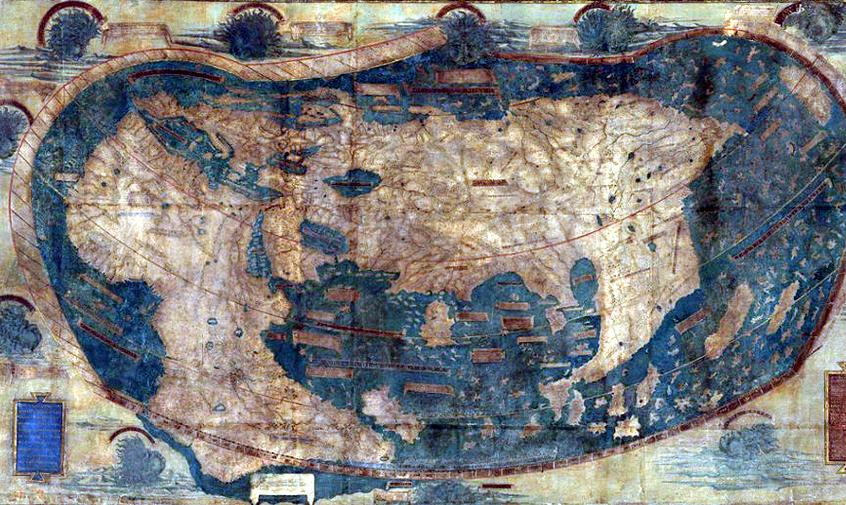 (From: Did This Map Guide Columbus?)

I'm interested in more examples such as this one and especially in detailed cases.

Treaty of Tordesillas defined a division of new lands between Spain and Portugal along a meridian 370 leagues west of the Cape Verde islands. Since it was so difficult to define where that meridian was, some Portuguese maps declared that the territory of present Uruguay was under their influence, even though the territory was in Spain's lands.
As result, Portugal founded Colonia of Sacramento in 1680, in front of Buenos Aires. The same year, Spanish forces invaded the colony and occupied it. Actually, the control over the colony changed of hands several times.

Finally Uruguay became an Spanish colony, but for a long while it was Portuguese, because there where maps that declared that territory as part of Portugal influence.

Bad maps are the whole reason for Delaware's existence.

Ownership of the west shore of Delaware Bay had been controversial because of the Swedish and Dutch settlements that had preceded the settlement of Maryland.

a numerous Colony of the English Nation, to a certain Region, herein after described, in a Country hitherto uncultivated, in the Parts of America.

and there would be much focus later on the word 'uncultivated' as a legal distinction. Since the (then) Swedish settlement wasn't a British colony, Lord Baltimore claimed ownership, but didn't have the resources to exercise the claim.

In 1665, Admiral Penn captured the area in question from the Dutch, and King Charles II granted Penn's son William an area north of the Fortieth Parallel plus a circle twelve miles from the former Swedish/Dutch settlement, now called New Castle. (Because the Fortieth Parallel is much more than twelve miles north of New Castle, this technically put Philadelphia within Maryland). Much hilarity ensued.

In 1685, King James II had set the boundary between Maryland and what was then called the "Three Lower Counties" as a line from the 40th Parallel to the midpoint of an east-west line between Cape Henlopen and the Chesapeake Bay, then east to Cape Henlopen.

On the last day of October the committee proposed in the presence of Baltimore and Penn, that the whole peninsula or tract of land called Delaware, as far as Cape Henlopen southward...be divided equally between His Majesty and Lord Baltimore.

"History of the Boundary Dispute Between the Baltimores and Penns Resulting in the Original Mason and Dixon Line" by Edward Bennett Matthews, Maryland Geological Survey, 1908, Volume 7.

One of the first things Parliament did after the Glorious Revolution, even before the English Bill of Rights, was to revoke the Charter of Maryland, and it took 26 years, conversion to Anglicanism, and a new king from Germany, who didn't speak much English, for the Calverts to get Maryland back. In the meantime, the Penns had been given the Three Lower Counties and their claims had widened.

In 1732, Lord Baltimore and the descendants of William Penn tried to use this map to resolve the boundary dispute between Maryland and Pennsylvania:

This was a map commissioned by Lord Baltimore, but the cartographer had based it off a very inaccurate Dutch map from 1651. 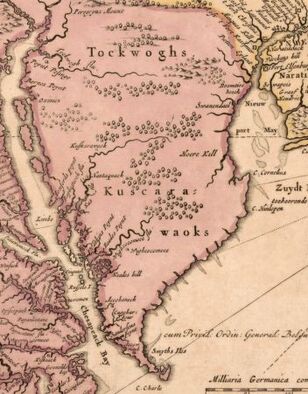 Compare to the actual location of Cape Henlopen:

Lord Baltimore felt he had been tricked, and sued to get this submission changed, to no avail.

Had he referred to Augustine Herrman's map of 1673, or Christopher Browne's map of 1685, or Joan Vinckeboons's map of 1639, things might have been different.

Nevertheless a mini-war between Maryland and Pennsylvania ensued and it took George II and some proper surveyors to set the boundary straight. Nevertheless, minor disputes continued until 1908.

After the mutiny of the Bounty in 1789, Christian Fletcher's group of 9 mutinees and 20 abducted Tahitians decided to settle on Pitcairn Island, which had already been discovered but was wrongly reported (drawn 348 km or 188 nautical miles to the West of its real position) on the English Admiralty's maps.

This longitudinal error contributed to the mutineers' decision to settle on Pitcairn.

The logic was that once they found the real location of the island and understood there was an error on English maps, they calculated that the English Navy was very unlikely to find them on Pitcairn. Indeed,

Trying to find a tiny island (18 square miles) when you have a position error of nearly 200 nautical miles is a daunting task.

As a result, Pitcairn Island was settled by Humans again and an original community developed there, uncontacted until 1808. Only in 1814, a quarter of a century after the mutiny, would England learn about the settlement, and then decide to take no action against the last surviving mutinee, John Adams.

It is often said that during the war between France and Prussia in 1870-1871, the Prussians had a better organized QG with better maps, and that was a good way for them to organize their manoeuvers. On the other hand the French Army suffered sometimes from bad estimations of time to travel, or bad choices on which positions where the best to defend, two elements coming from less accurate maps.

As a consequence, the Prussians often outmanoeuver the French, and it was part of the causes of their final victory.

Despite advances, the QG map was for a long time only for a minority. Until the Franco Prussian war, it is a tool for the strategist, the one conceiving the battle and conducting the armies. The map device [litt, meaning all the tools for cartography] still appeared as largely insufficient.

5
Have map projections and distortions ever affected treaties?

26
What are good online sources for historical maps?
10
Can anyone explain why the Scottish flag on this map from 1504 has a red cross on a white background?
7
How were ethnographic maps in the 19th century made?
3
When was the use of detailed maps for military campaigns widely adopted?
5
Where can I find maps and other historical resources / references of Calcutta / Kolkata in the Victorian era?
44
What is the logic for the map maker classifying the map this way, specifically in Canada?
9
How to build historical maps?
13
Why do some 17th and 18th century maps depict Ottoman sanjaks north of the Danube in Wallachia?
33
When the Portuguese began the exploration of the West African Coast, did they believe the Indian Ocean was an enclosed sea?
5
When did the Portuguese decide to extend their West African exploration to finding a sea passage to India?