Why does this London Underground poster from 1924 have a Star of David atop a Christmas tree?

There is currently an exhibit at the Art Institute of Chicago displaying posters promoting London Underground transit from the 1920's and 30's.

This interesting piece comes from 1924. A full descripton can be seen on The Library of Congress website. As you can see, it is somewhat unusual in that, despite including a Christmas tree and the word "Christmas," it has a Star of David atop the tree. 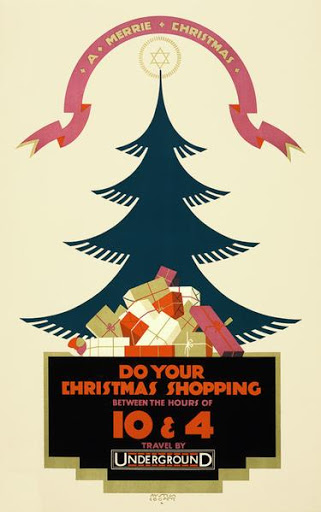 The blending of Jewish and Christian traditions in early 20th century Britain surprised me. To my knowledge, placing a star atop a Christmas tree is a common form of decoration, but the specific reference to Judaism seems unusual.

Is there any precedent for this kind of cross-cultural decor? Was it in fact designed for inclusivity? Or, alternatively, was placing a Star of David atop a Christmas tree once a common practice in the mainstream Christian tradition, in Britain or elsewhere?

The hexagram is not an exclusively Jewish symbol. For that matter, the Star of David as a symbol of Judaism (as opposed to a symbol used by Jews) is far newer than people realize, dating only to 1897 and the First Zionist Congress. Given that, seeing a six-pointed star on top of a Christmas tree in 1924 is no surprise.

Also, Jesus was of the house of David, so the Star of Bethlehem being designed as a Star of David should be especially unsurprising