Did Romans keep tax records of individuals in Palestine around Jesus' lifetime?

This question in Christianity.SE asks how would Jesus write his name in civil records. This answer denies (based on the lack of positive evidence) that Jesus ever wrote his name in a civil record. Although there might not be (yet) such evidence, the key issue is whether Jesus might have ever done so, given the context of the period.

In order to further understand the context, I would like to know whether Romans keep tax records of individuals in Palestine during the time of Jesus (e.g. list of individuals liable for a given tax). It seems obvious to me they did, but I have so far no evidence of such tax records, let alone of that period and region. Any expert on the topic?

There was the so called Census of Quirinius, one of which aims was to make a record of population for tax purposes. This book states:

A census is necessary to assess property values for a land tax and to record the population for a poll tax. At least one is known, covering Syria and Judaea in A.D. 6, during the governorship of Quirinius.

How such record might have been organised, I cannot tell. But there are, for example, Greek tax records. This one, from 2 BC, contains (in English): 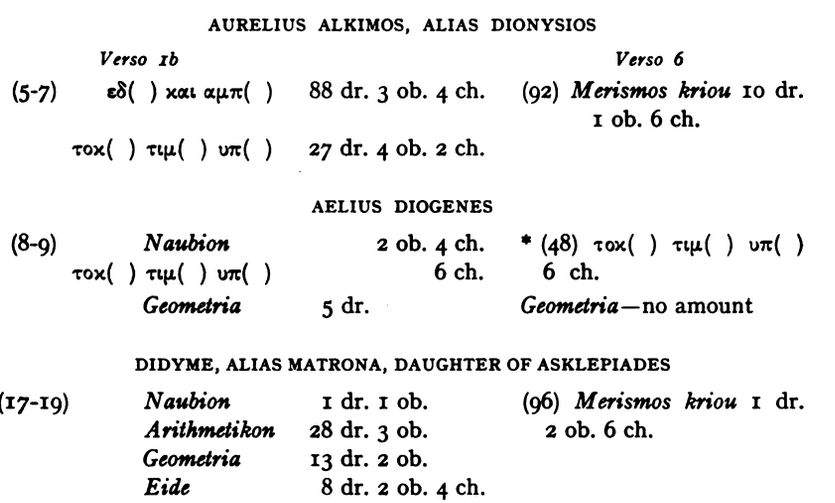 The capital letters are the name of individuals.

There is actually a Greek word, used in Roman times, to describe such tax records: Laographia. About this word, this webpage states:

(λαογραφία, λαογράφος; laographía, laográphos). From the Ptolemaic period onwards, censuses were conducted in Egypt (laographíai: the people were ‘written down’). These took place from Augustus onwards on a 7-year cycle, and from Tiberius onwards every 14 years. In the Roman period, laographía also referred to the list compiled in the process of those liable for poll tax and the poll tax itself ( Taxes). Men between the ages of 14 and 60 were subject to it unless they were Roman citizens or citizens of privileged Greek poleis; for the other Greeks, reduced tax rates in comparison with the Egyptians applied.

From the time of Augustus, the laográphos was the local official responsible for the laographía. The office was held collegially.

More about this lists can be found here and here. The latter says the following:

Both the third- and the first-century evidence from the Arsinoite nome shows that collection of these taxes was based on lists of taxpayers drawn up by village for compilation and condensation at a higher administrative level, and some written declarations of themselves or of their households by individual taxpayers are known. Three first-century texts refer to this process as laographia (registration of the people), and two of them more specifically call it "laographia of those paying (who have paid) the syntaxis (and epistatikon)". Possibly the term laographia came in with the other changes to capitation charges towards the end of the second century, but it may be much older. I suspect that the lists were drawn up annually (like the various records of land), and that each village scribe revised the previous year's list mostly on the basis of personal knowledge or oral enquiry, and that the written declarations, which are few, brief and of varying format, were optional adjuncts to this process used by people absent from the village or who fussily wished to ensure that their information was recorded. Only actual taxpayers seem to have been recorded. Ages and property were not normally recorded (there were separate annual registrations of land, and biennial ones of livestock), but the recording of (presumably) full-time occupations, apart from that of "farmer", was clearly very important, for one document even dispenses with the patronymics of men with stated occupations. Also recorded, at least in the aggregate lists, was the ethnic status of the taxpayers (e.g. Hellene, Arab).

And more about Roman Egypt:

In Egypt, however, although the Romans fostered the gradual emergence of self-administering town councils, they retained direct centralized control over the collection of direct taxes, and so had to keep regularly up-dated records for the whole province of the actual population and land subject to tribute.

The origins of the provincial census in Egypt, another novelty which was closely connected with the poll-tax, constitute an equally thorny topic. From the reign of Tiberius to the mid-third century A.D. a provincial census was taken in Egypt every fourteen years. Written declarations (apographai) had to be submitted for each unit of housing in towns and villages (kat'oikian) ; the information required included the name, age and status of each occupant and the other buildings and building plots owned by the declarants. The basic purpose of the census was to facilitate exaction of fiscal and liturgie dues which fell on the person. From it local officials drew up lists of those liable to tributum capitis, including the poll-tax proper and trade-taxes and the Jewish tax, and hence the census was held every fourteen years to catch all males reaching the age of liability.

Finally, some relevant quotes from a brief paper (paywalled) titled "The Monetary System, Taxation, and Publicans in the time of Christ":

Taxes proper were of two kinds. There was the tax on landed property and the poll tax - tributum soii or agri and tributum capit

The Romans exacted from the Palestinians (to the same extent as from the natives of other countries subject to Rome) a water-tax, a city-tax, a tax on such necessities of life as meat and salt, a road-tax and a house tax [Klausner, 1929, p. 188].

Not only were men of Israel subject to tax by the Romans, but there was also the temple tax to pay.

The Roman tax system with its self-interested publicans repressed trade. It also avoided fraud for the state. "It was a favorite device of the tax-gatherers moreover, to advance money to those unable to pay, thus converting the tax into a private debt, upon which an usurious interest was exacted" [Hausrath, 1878, p. 1].

Surely these publicans kept track on the debts owned to them, so likely they also kept records of tax payers.

Jesus Christ chose Matthew, a tax collector, to be his disciple. His talent for keeping records would prove to be of great value. "The only word that Matthew has about himself is that he was a Publican. . . His business as a tax collector accustomed him to keeping records" [Halley, 1965, p. 413]. Perhaps Matthew even knew shorthand because shorthand was well known in the ancient Hellenistic world.

Not sure what's the evidence for this, but it suggest Matthew was a record-keeper.

So, although I couldn't find direct evidence of tax records during Jesus's period, the evidence above seems to indicate that such records were very likely to be kept. Since Jesus was not Roman, he had to pay taxes (as adult) and hence might have been quite likely on those records.

The answer to did the question, "did Roman's keep tax records in Palestine of individuals", the answer is yes. The answer to your overall question; however, referring to Jesus would most likely be no. Jesus as a carpenter would have been a poor day laborer likely with few possessions not subject to the tributun which taxed personal wealth.. Although he may have been subject to the poll or consumption taxes those as today were less subject to personalized documentation.

Palestine under Herod the Great was a Roman client state. When Herod died his country territory was eventually partitioned with each partition given a different Legate governor appointed by Rome. The ambitious census refereed to in the previous answer Census of Quirinius is not believed to have included Jesus.

2) The location is wrong. The Census of Quirinius was taken in the Province of Judea/Syria and if Jesus was born in Bethlehem he would not have been effected.

Likewise their is no historical record of a Empire wide Census as described in the New Testament book of Luke ever having taken place in the Empire. It was not documented by history... (Empire Wide).

See my answer to this related question for an explanation to this discrepancy.

luchonacho
Thanks. In my answer I mention that censuses were conducted quite regular (e.g. Roman Egypt). I do not expect that evidence of every census survived. Also, my answer does not only focuses on census, but also on tax registres by "publicans" or other tax collectors. Just like today, censuses are only carried out every other decade. In between, tax authorities still collect taxes based on other registries. So I don't understand how you conclude the general answer is no. Proving a negative result is usually very very difficult. Maybe a local rule in Judea decided to carry out a low-key registry

.
@luchonacho Rome did not conduct censuses in general. the "Census of Quirinius" was an exception not the rule. The reason for the census in Luke, which is not mentioned anywhere else in the bible; specifically the gospels of Matthew, Mark or John; nor any other historic writings is what makes this a great history question. It wasn't a mistake but has to do with the nature of history at that time. History as a literal retelling of events is modern thing. This is what my answer in the referenced other question goes into in quite a lot of detail. Related Question: History Stack Exchange: When did Herod the Great die?

As for other tax records again I think the answer would be no..

The Roman tax system consisted of two types of taxes. A consumption tax on goods livestock, land, oil, olives, wine, beer, and fish.... etc. And another more prominent tax the tributun, which was a tax on material wealth of individuals...

Jesus as a poor man from a poor family was probable occasionally subject to the former in which written records would not be kept; and not subject to the latter which was better documented and primarily fell upon the wealthier citizens.

Besides that Jesus was fairly popular name in that part of the world at that time.

So for a written historical mention of Jesus's life we are left with the two passages from the Roman Historian Josephus.

Not the answer you're looking for? Browse other questions tagged roman-empire writing or ask your own question.

3
When did Herod the Great die?

19
How much tax did Romans pay?
16
Did the Romans melt down looted golden objects or did they keep them intact?
5
What allowed or prevented Roman conquest in terms of population, climate and geography?
2
Why did Romans use the sesterce in written monetary records when the coin itself was so rarely used?
24
Why did people not tend to keep records or consider future consequences until very recently?