Did the German ship SS Hansa (former Albert Ballin) continue her journey to the West after 30 January 1945? 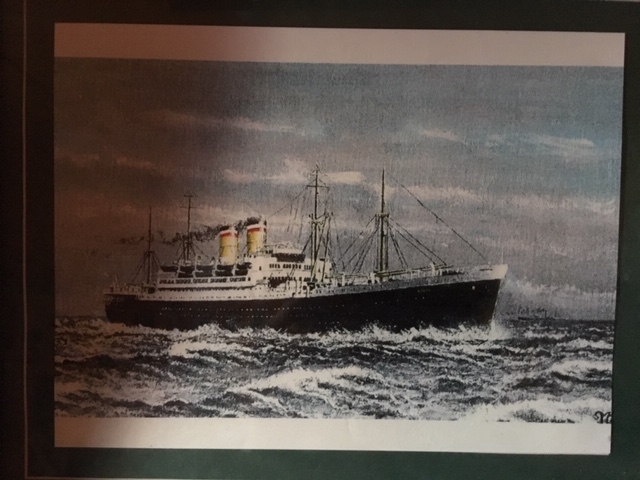 Looking for refugees or families of refugees who were on board the Hansa on January 30th 1945 when she left Gotenhafen with the Wilhelm Gustloff. I am trying to find out what happened to the Hansa and TF-1 when they experienced mechanical problems around the peninsula of Hela and had to go back, leaving the Gustloff and destroyer Löwe to continue their journey alone.

My mother was 5 years old then and was supposed to board the Gustloff with her mother. They arrived at Gotenhafen too late, the Gustloff was already full and were told to board the “Gustloff Geleit” instead. She remembered that the ship broke down and they spent several days in icy waters before they reached Swinemünde (?) and the refugee centre of Luneburg. From there they proceeded to Markoldendorf where they were registered on 7th February 1945.

According to the Hansa Captain’s son Normann-Ulf Neitzel, the Hansa would not have entered Swinemünde but would have continued her journey to Kiel. This makes sense as Luneburg is closer to Kiel than Swinemünde. I have researched this extensively but so far have not received a definite answer nor encountered any refugees who were on the ship. Survivors of the Wilhelm Gustloff and refugees from the Walter Rau don’t seem to remember seeing the Hansa except briefly before embarking.

Did you already read the book "Der HAPAG Passagier-Dampfer "Hansa"" by Ulf-Normann Neitzel? It describes every single day of the journey with details about where it was, when it waited, what the passengers ate etc.

I briefly read the passages after Jan 31st (page 66-67) and it says the journey continued directly to Kiel, even though there were a lot of waiting times, boardings by SS, and attacks by aircraft or incidents with sea mines.

Grandchild of a woman, now in her mid-90s, who was aboard the Hansa when it was supposed to accompany the Wilhelm-Gustloff. She was seeking refuge in the US with (I believe) her mother and older brother, and she at least eventually made it there. She never mentioned the boat returning to Germany, so I assume they made it to Kiel eventually. My Oma is still alive, but she has dementia so I can't get a more solid answer from her unfortunately. Sorry for the late and incomplete answer. I found this post while looking for a passenger list for the January 30th 1945 departure.

10
How did conditional POW exchanges work in WW2?
13
Was the Soviet Union in 1945 seeking to capture German soldiers and civilians, or drive them west?
2
Did other countries stop recognizing Austria, after the German annexation?
2
Did German soldiers receive pay after the Allied invasion?
3
What was the name of the torpedo boat with mechanical problems accompanying the Wilhelm Gustloff?