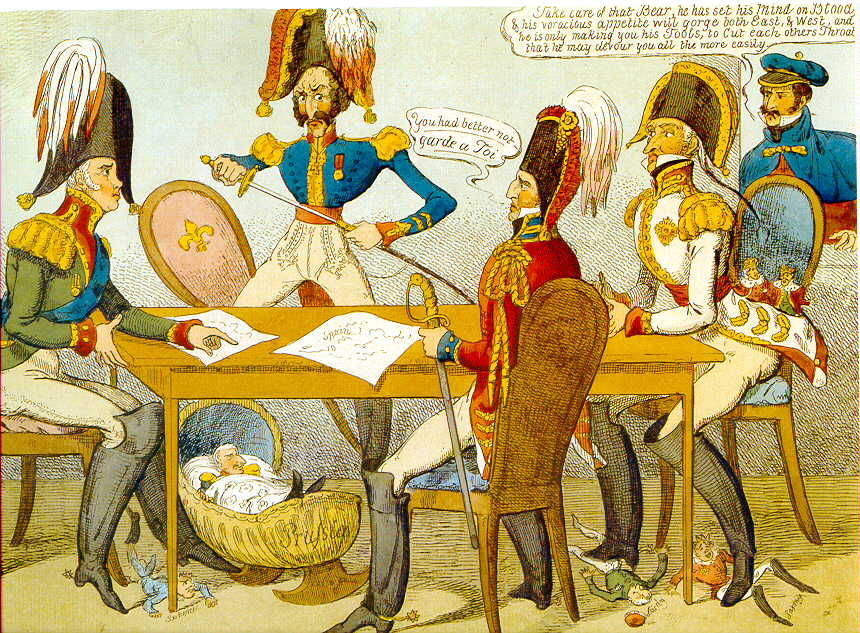 Three men in military dress sit around a rectangular table - a fourth man has stood up so suddenly that he has knocked his chair over. His sword is half-drawn. A fifth man watches though a window and gives a warning:

Take care of that Bear, he has set his Mind on Blood, & his voracious appetite will gorge both East, & West, and he is only making you his Fools, to Cut each others Throat that he may devour you all the more easily.

You had better not – garde a Toi

There are two small men behind the rightmost seated man on his chair. There is a man under the table in a rocking cradle with "Pruſsia" (Prussia) written on it. The leftmost seated man has one foot on the bottom of the cradle, presumably rocking it. There is a prostrate man in blue beneath the leftmost man. The label is too small to be read. There are two prostrate men beneath the feet of the rightmost man, one in green, one in orange. Both labels are too small to be read.

Who are all these people?

Wikipedia mentions many people present at the Congress:

The Quintuple Alliance was represented by the following persons:

I'm guessing that the man in the window is the Duke of Wellington, the standing man is Emperor Alexander I of Russia and the seated man saying "garde a toi" is the duc de Montmorency-Laval of France.

Note that a satirical sketch like this does not necessarily portray the actually participants at a conference. Often, they feature a personification of the nations involved. In this case, as Denis commented, green, blue, white and red are the colours for Russia, France, Austria and England, respectively, derived mainly from their military uniform colours. So:

Edit - As it turns out, Brown University has a high resolution scan of the work.. Check out the link for a better view, but specifically the close ups on the labels identifies all the little figures: 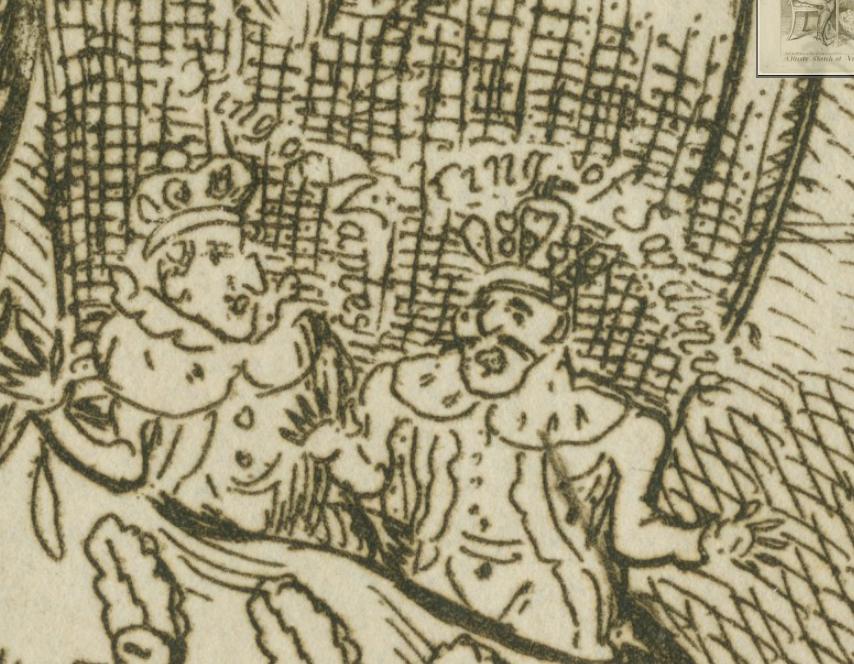 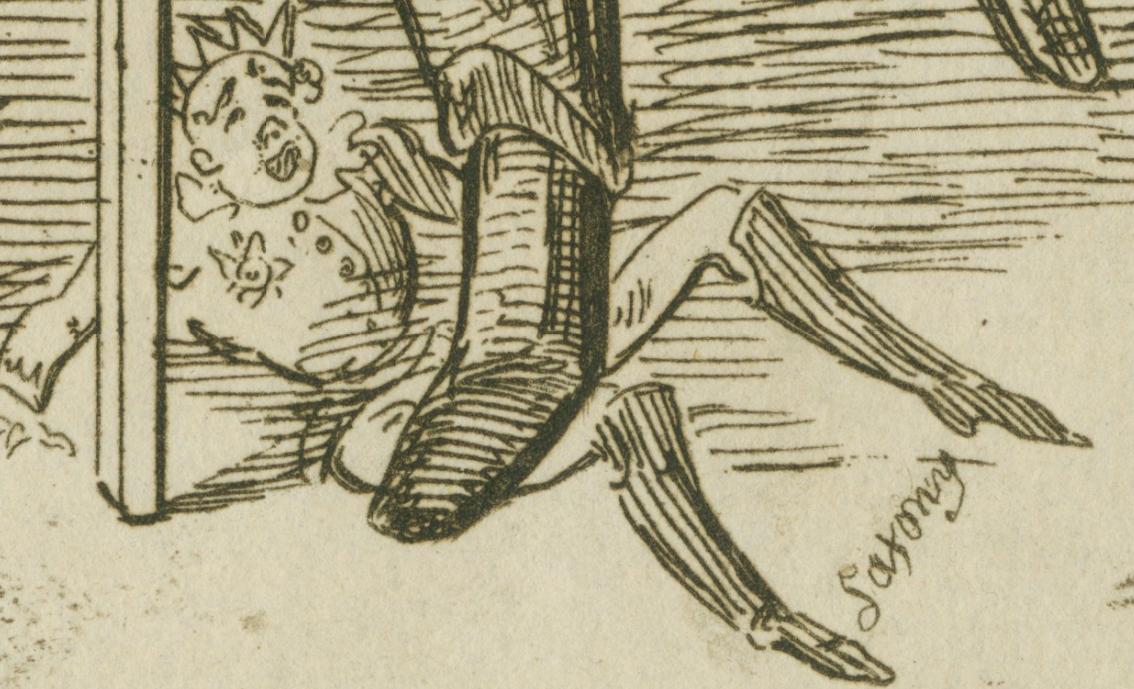 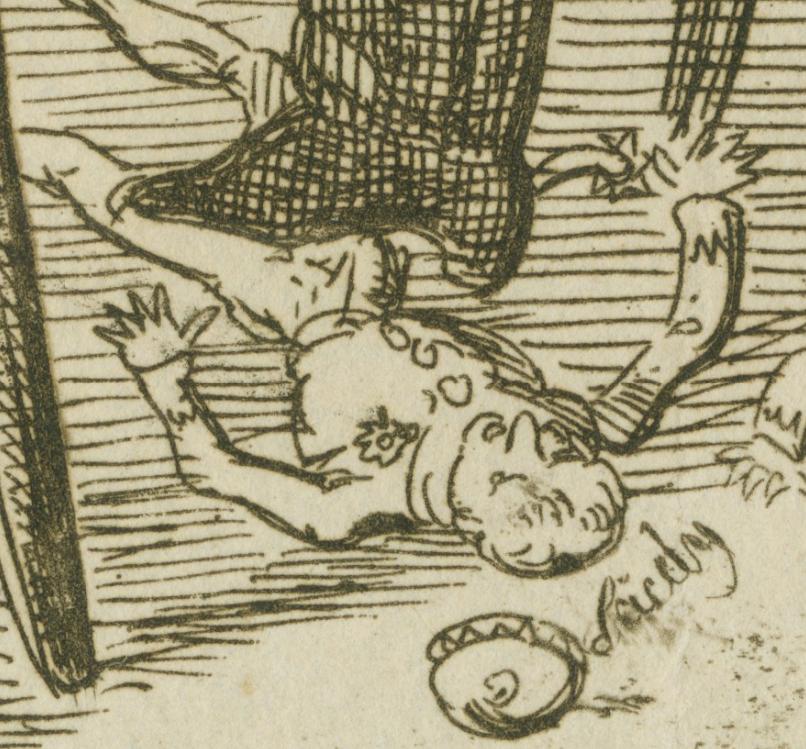 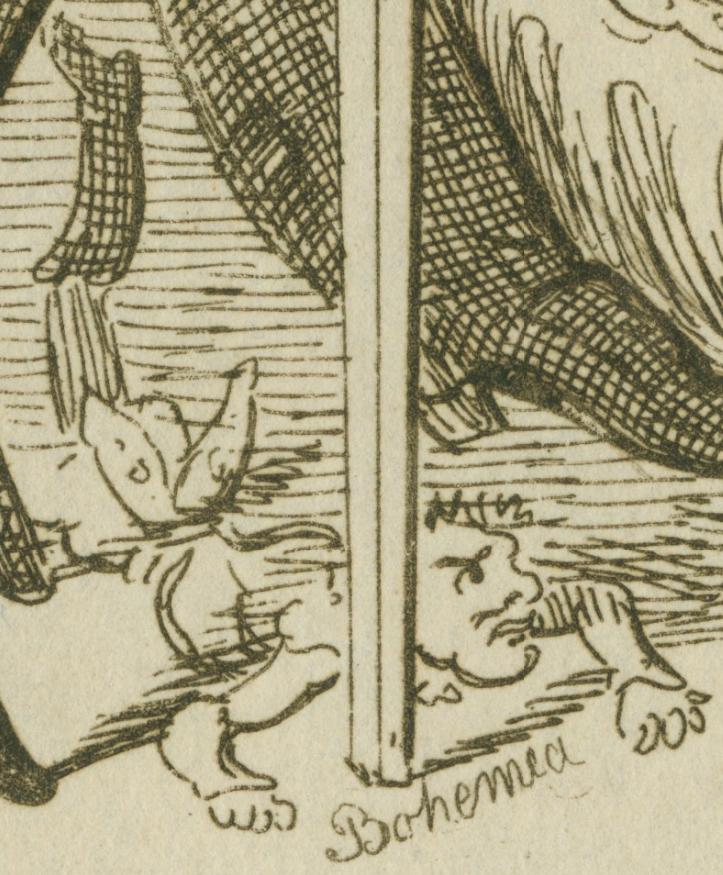 Not the answer you're looking for? Browse other questions tagged europe 19th-century or ask your own question.

4
Who are the people on the cover of James Joll's Europe since 1870?
7
What 17C protocol left a princess standing whilst commoners sat?
38
Who is this young 'Prince'?
11
Who is this, probably royal, teenager?
18
Who is in this c.1866 photo?
6
Why did European writers and artists continue to depict the Moors as being black skinned, even though they were mostly Berbers and Arabs
3
Who is this statue of?
1
Who is this particular inventor from XIX century?
16
What uniform are these gentlemen wearing?
3
Can you help identify this European military uniform?