Was Rosie the Riveter sourced from a Michelangelo painting?

The Russian Wikipedia page states that an art from Michelangelo is a source of inspiration for Rosie the Riveter arrwork.

My own impression is this looks indeed like that, there are many similarities. But is this somehow proven by any historical facts/sources? 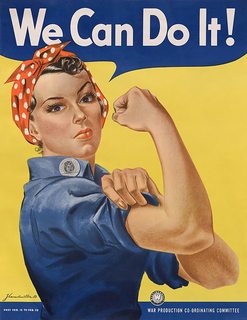 but the painting by Norman Rockwell from 1943: 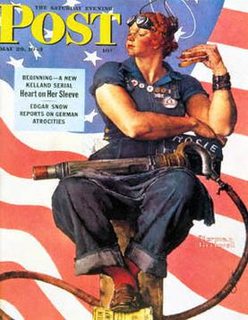 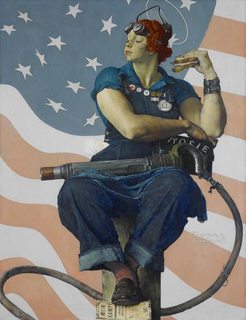 The pose in the Rockwell painting does look a lot like the pose Michelangelo chose to display the Prophet Isaiah in in the Sistine Chapel: 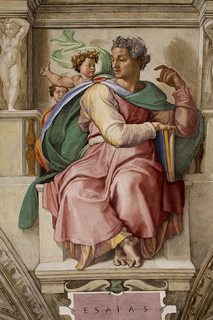 (Note that the Norman Rockwell museum once thought Isaiah is the identical to Isaac, since corrected.)

The Russian Wikipedia has a nice description of the paiting:

The composition of the picture literally copies the figure of the prophet Isaiah from the fresco of Michelangelo from the painting of the ceiling of the Sistine Chapel. Although the prophet does not have a box of sandwiches and Red Cross badges, he sits in the same position as a comically-muscular red-haired girl sitting on the background of a wave falling in the American flag, with sandwiches in her hand. On her lap there is a pneumatic gun for riveting and a lunch box with her name “Rosie”, which allows without any signature on the picture to recognize the heroine of the famous song “The Riveter of Rosie”. Her foot tramples a copy of Hitler’s book Mein Kampf, which symbolizes her direct contribution to the victory over the enemy. The lightweight construction of the wire above her head creates the impression of a halo and thereby elevates American girls, who have replaced men in the workplace, to the rank of saints.

Rockwell based the pose to match Michelangelo’s Sistine Chapel ceiling painting of the prophet Isaiah.

The “We Can Do it” poster was only seen by Westinghouse Employees as W.H. had hired their own in-house artist. His posters would be displayed for two weeks and then replaced with another of his designs. The posters were eventually donated to the Smithsonian. Rockwell’s painting was only known as the Rosie, admittedly based off of the Michelangelo painting in the Sistine Chapel. Fast forward to the Women’s Movement and they had wanted to use Rockwell’s painting but because of copyright issues they couldn’t. Someone turned them on to the “WCDI” poster and Voila.

Not the answer you're looking for? Browse other questions tagged art reference or ask your own question.

2
Number of artisanal working hours spent on making Terracota Army
12
What was the “Brakteaten” medieval monetary system?
4
Did Ancient Romans use metal thimbles? What were they like?
24
What are some Chinese sources testifying the extreme weather events of 535-536 CE?
3
Where did the following reference originally arise from?
9
Is this costume plate from Theatrum Orbis Terrarum correctly colored?
7
How, where and when did Lily Pettigrew die?
4
What is the meaning of this phrase in chapter 64 of the Book of the Dead?
11
Where can I find examples of fiefs that are not land?
10
Is there any verifiable ancient source for the etymology of βάρβαρος?